The Dogs of Winter

Join awarded playwright, director and novelist Ann Lambert for a book reading and insightful Q & A at the launch of her ‘torn from the headlines’ sophomore mystery novel, The Dogs of Winter (Second Story Press). This latest book follows the success of The Birds That Stay; book one in the Russell and Leduc mystery series which was the Quebec Writers’ Federation’s Concordia First Book Prize finalist. The launch is hosted by radio journalist and activist Anne Lagacé Dowson on Wednesday, October 28 from 7-8pm.

In The Dogs of Winter, a murderer with a twisted mission targets the most vulnerable on the frigid streets of Montreal. At the same time intimate scenes unfold revealing how the #MeToo movement has changed the conversation, but not nearly enough…

This latest page-turner begins as a howling snowstorm envelops Montreal, and the body of a young woman is discovered in its wake. The only clue to her identity is the photograph in her pocket, and on it, the phone number of Roméo Leduc, Chief Inspector for Homicide. Meanwhile, Professor Marie Russell and Roméo are busy navigating their deepening relationship, and a student at the college where Marie teaches is the victim of a sexual assault. While Roméo begins to think that the dead woman may be linked to violence against several homeless Indigenous people in the city, the search for justice in both cases is thwarted by societal apathy and ignorance.

Detective Louis Cauchon: “I find that very offensive, Chief Inspector Leduc. We have all had our Aboriginal sensitivity training.”

Montreal is a central character in this topical and timely mystery. “I have always, as a playwright and now novelist, tried to weave individual stories into a larger historical, political and cultural backdrop, hopefully in ways that broaden our experience through the juxtaposition of the personal and political,” said Lambert. In The Dogs of Winter, among other hot button topics we gain insights into current Indigenous issues, from the tragedy experienced by Joyce Echaquan to disputed calls of systemic racism to the delayed action of the Viens Commission’s report. Lambert examines all this through the eyes of both Francophone and Anglophone characters, beautifully interweaving a captivating plot with both sensitivity and humour (including fun Québécois expressions). “I have always appreciated the adage: Don’t write what you know, write what you want to understand,” she explained.

“The Dogs of Winter is as much an exploration of a city and its communities as a traditional crime novel. It’s about power and powerlessness in the dead of winter. And more than that, it’s a rollicking good read.”
– Anne Cleeves, award-winning crime writer

“In this gripping story taking place in the heart of the city of Montreal, Lambert builds on the crackling chemistry between Russell and Leduc, propelling them into a new investigation lined with unsung heroes and unseen villains. The Dogs of Winter does not shy away from the darker side of Canada’s history—nor its present—and makes for compulsive reading, with Lambert’s characteristic blend of humour, pathos and vivid prose.”
– Anne Lagacé Dowson 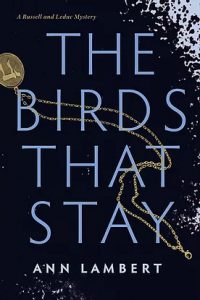 For Second Story Press publisher Margie Wolfe, The Dogs of Winter is an engaging, present-day novel. “Great detective novels are much more than ‘who-done-its’. Like the best fiction, the characters are richly evolved, with the story highlighting realities of the culture in which it is set. Ann Lambert here provides the mystery lover with a compelling storyline and reminds us of the injustices which we often aim to ignore,” she said.

A deeply personal novel, Lambert says she wrote the kind of book she likes to read, “I always hope for a murder mystery written for people who welcome greater complexity and depth of story-telling, who appreciate stories where history collides with characters in their daily, ordinary lives, and take them on a tumultuous and unpredictably satisfying journey.” It was also important for her to start the book with the voices of four women who are completely different in terms of age, ethnicity, class, and opportunity; a young Inuit woman trying to turn her life around, a college student going to a party which she thinks will change her life, a successful entrepreneur caught in a terrible dilemma, and Marie, a late middle-aged woman awaiting her life partner as they navigate a big decision about their future together.

Virtual book launch for book two of the Russell and Leduc mystery series:

The Dogs of Winter by Ann Lambert

The Dogs of Winter is available now at Indigo & Kobo among others, signed copies available at Paragraphe Books.