The day the Canadian boarding students returned to Stanstead College this past September, the school received a call from a manager at Stanstead’s only grocery store. Customers had noticed students shopping, and the manager was asking, essentially, “Uhhh, are they supposed to be here?”

It was an understandable query. Two weeks earlier, the Eastern Townships independent school had welcomed most of its international boarders, and the protocol was clear: they would be bussed from the airport straight to the school where they would quarantine for 14 days. No pit stops. It was a protocol that Stanstead College had outlined in the town’s municipal newsletter. So, to be fair, when the domestic students arrived (no quarantine necessary), the manager was checking if they were breaking school rules by being in the store. 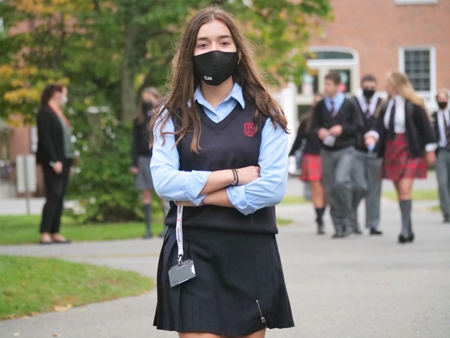 Masks are now part of the student uniform

But behind this “Are they supposed to be here?” was a hint of “Why are they here?” Strangers. Outsiders. Potential COVID carriers. Coming to our town. Putting our customers at risk.

It was a moment typical of the sometimes uneasy coexistence between Stanstead College, with its generally well-off clientele, and the mostly blue-collar Town of Stanstead. It’s a coexistence, though, that both sometimes take for granted, forgetting that one could not likely exist without the other.

From local school to independence

This relationship goes back to 1872 and the very founding of Stanstead Wesleyan College, as it was then called. Until the late 1950s, it was the local Protestant school, i.e. the English school, educating generations of children from this side of the Vermont border at both the elementary and high school level. These locals mixed with the College’s boarding students from Montreal, Toronto and beyond.

In 1959, Stanstead College became an all-boys school. The girls returned in 1979. In the interim, there was one more major change. In 1977, faced with Bill 101, Stanstead College decided to no longer accept subsidies from the Quebec government. The resulting independence allowed – and still allows – the school to maintain control over its policies, including enrolling francophone and international students. The school still follows the Quebec curriculum in Grades 7 through 11 plus offers a pre-university Grade 12 program with Advanced Placement (AP) options. 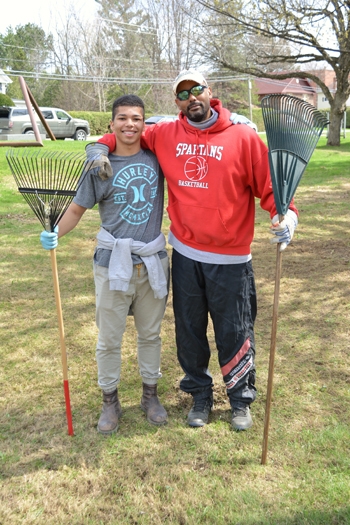 Student and teacher at a Community Service Afternoon in the town

Today, Stanstead College is a school of under 250 students, of which 70% are boarders and 30% are day students. About 50% are Canadian, 15% American and 35% international from China, Mexico, Japan, Germany, Nigeria, Brazil, Czech Republic…

The North American private school market is incredibly competitive. Stanstead College not only promotes its small student population but its small, semi-rural community. “A safe, secure learning environment” is how they describe it. The Town of Stanstead is close enough to Montreal to be accessible but far enough to feel like the middle of nowhere. There is, frankly, not much trouble to get into. Parents love it.

The school also promotes its immediate proximity to Vermont. Stanstead College is the only Canadian high school accredited by the New England Association of Schools and Colleges, giving graduates a fast-track into U.S. as well as Canadian universities. And because of the close proximity, many of Stanstead’s students cross the border every day from Vermont.

Head of School Michael Wolfe thinks that a lot of people don’t realize this—not just about the Vermont day students but about local students in general.

“People think we have a ton of money,” he says. “But we’re a not-for-profit school. Any money we might make is reinvested in the school. We give out over $1.8 million a year in scholarships and bursaries.  An awful lot of that goes to local students. And we don’t have a problem with that. We have a real commitment, particularly in the past 20 years, to local students.”

The College also boasts one of the best high school hockey programs in the country, with graduates of both the boys and girls teams going on to play at the junior, university and national levels, even the NHL; in 2012, Mark Jankowski was drafted straight out of Grade 12 by the Calgary Flames in the 1st round, 21st overall.

Like the general boarding school market, high school hockey is extremely competitive. For years, the Spartans played in what was a glorified Quonset hut—“The Barn,” as it was not always affectionately called. In 2007, to take the hockey program to the next level, the College decided it needed a new facility. Infrastructure grants were available, shared one-third each by the federal government, the province and the municipality. There was only one problem: Stanstead College was not a municipality.

The College turned to the Town of Stanstead and together they worked out a deal: the town would apply for the infrastructure grant for a new arena, and Stanstead College would cover the municipality’s share, at no taxpayer expense. In 2011, after a major capital campaign, the Pat Burns Arena opened, owned by the town but leased and operated by Stanstead College. In addition to hosting the Spartans hockey team, it is also home ice for local hockey leagues.

“A lot of people don’t realize that the town would never have been able to build an arena like that,” says Mayor Dutil. “Thanks to the College we have one of the nicest arenas in the region.”

Michael Wolfe says the arena project was a real turning point between Stanstead College and town hall. When he first arrived in Stanstead 30 years ago, he says, there was virtually no relationship with the town.

“I don’t think that was intentional,” he says. “Stanstead College just operated within its boundaries. There weren’t a lot of opportunity to engage.” 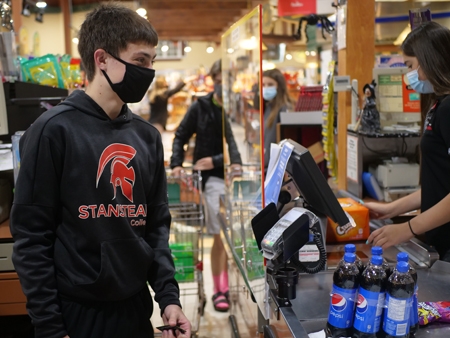 “It’s not just a one-way deal,” says Wolfe. “It’s good for our students to help and learn the value of volunteerism and service. And I would hope that people realize that we’re making an effort.”

There is also the economic impact as the town’s second-largest employer. Stanstead College patronizes the local businesses and services, whether it’s the hardware store or the aforementioned supermarket.

These days, however, students are not walking up the street to Subway. Like all Quebec schools, the College shut down in March and finished the school year online. With the new year under way, the school is keeping its students on campus as much as possible to protect them – and the community – from COVID-19. Ironically, the College and the community have isolated themselves at a time when their relationship has never been better.

But on Saturday nights, a bus leaves the College campus and drives up to the grocery store. The students pour out and—masks on, social distancing—enter the store to load up on ramen noodles, Gatorade and snacks. It is after hours, and the store has remained opened exclusively to serve the students; without stressing out the locals.

Later, images of the kids shopping are shared on social media. Locals comment on what a great example this is of cooperation between the College and the town. The store, of course, is making a killing. But no one is complaining about that.