Il Divo has always stood out for its peculiar mix of opera and pop in songs of different genres, and is the most important reference in the world of the crossover groups of classical music. Since its debut in 2004, IL Divo has triumphed on the most important venues around the world, and has sold over 30 million records throughout its career.

First discovered and mentored by Simon Cowell in 2003, the group composed by the Spanish Carlos Marin (baritone), the Swiss Urs Buhler (tenor), the Frenchman Sebastien Izambard (tenor) and the American David Miller (tenor), became a pioneer of a musical genre unknown until that time when in 2004 they released their debut album “IL Divo”. 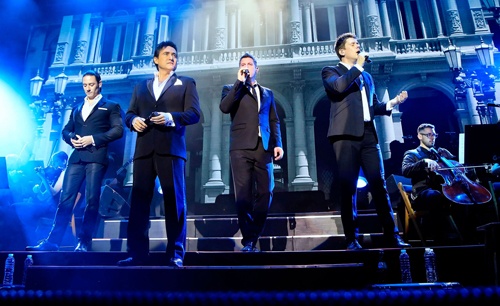 Since then, the international four-member group has become the world leader in its genre, and has achieved a second to none success around the world, performing before personalities like as former US presidents George Bush, Bill Clinton or Barack Obama , or the Queen of England.

With hits like “Regresa a Mi” (Unbreak My Heart), “The Time Of Our Lives” (“The Official Song of the 2006 FIFA World Cup),” “I Believe In You” (Je crois en toi) a duet with Celine Dion, or now in his latest album “Hola” (Hello) version of the worldwide success of the singer Adele, have achieved to sell over 30 million records, 50 No.1, 160 gold and platinum records in more than 33 countries, and six world tours with all the tickets sold out in the most important venues around the world.

After his debut album, “Il Divo” (whose sales resulted their first Platinum album), later albums – “Ancora” (2005), “The Christmas Album” (2005), “Forever” (2006), “The Promise “(2008) and” Wicked Game “(2011) – have managed to repeat the perfect formula between pop music and the vocal virtuosity of the opera, which has given them such popularity these years. With their recording in 2013 of “A Musical Affair”, they celebrated the classics of Broadway and the West End. Later in 2015 they released their album “Amor y Pasion” compiling the best Latin songs, with which they managed to reach number 1 on the Latin Albums Chart in their first week.

In addition to their studio albums IL Divo has produced a special album of Christmas songs in 2005 “The classic Christmas album”, a compilation album “The Greatest Hits” in 2012 that released 4 new songs, as well as has published 2 more albums live: “An Evening With Il Divo: Live In Barcelona” (2009) and “Live in Japan” (2014), as well as numerous special editions, duets and collaborations with other artists such as Celine Dion, Tony Braxton, Kristin Chenoweth or Michael Ball among others, and numerous DVDs of their live concerts all around the world

Their latest album “TIMELESS” is their 10th studio album, an album full of songs from the 20′ to the present.

Catch up with these four talented singers on a Live Facebook chat at 5:00pm EDT on October 15, 2020. https://www.facebook.com/ildivo/