Duke Eatmon – Montreal broadcaster, teacher, musician and promoter combines a charismatic personality with a wealth of musical knowledge for his popular contributions to CBC radio and television 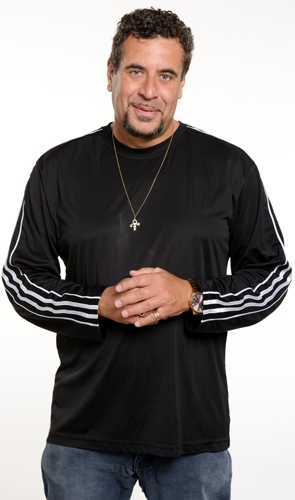 Duke Eatmon started with CBC by doing weekly on air vignettes about musical performers with a wide range of styles; Pop, Hip Hip, Jazz, Rhythm ‘n’ Blues and all forms of Rock ‘n’ Roll. Listeners and staffers alike were impressed by his encyclopedic knowledge of such a wide variety of musical genres, from rockers AC/DC to jazz singer Dalla Reese. Duke’s popularity grew, his on-air contributions multiplied and expanded to include television appearances. Today Duke Eatmon is full time with the CBC, taking on additional hosting duties when needed.

“I have an Afro-Canadian father and a Native-Canadian Mother, and both are big music fans. In fact, it was music that brought them together. My mother was managing a record store in the East End on Ontario St. My Dad was a regular, checking out the records. It wasn’t long before a romance started. They were young when they married; my mom wasn’t yet twenty. Being music fans, they named me after Duke Ellington.”

“My mom brought home a new 45 record every week, and I learned how to work the record player. They’d have house parties, and my ‘job’ was to play the records. I was only two and couldn’t even read the labels – but I could remember what label colours and letters went with the songs on the records.”

“We have accomplished musicians in our family in Canada and the U.S. I’m self-taught on piano, bass guitar and a couple of other instruments like mandolin. However, I’ve been so busy with my broadcasting career that I’ve not played much lately. I like all music, but I admit that I have a preference for artists who are socially conscious and make a commentary with their material; artists like Chuck D, Bob Dylan and Prince.”

“Like other young people, my young parents liked to go to live shows. They just took me along and I sat on one of their laps. They went to see Chuck Berry on the Steel Pier in Atlantic City, and as a two-year old, I got up and duck-walked across the stage with Chuck Berry. When I was a little older, they took me along to see James Brown at Place Des Arts. He was famous for putting on very long shows. At one point, the house lights went on and a dozen police came on the stage and said that the show had to stop. James took the microphone and said; ‘There’s 12 of you and 3,000 of us – what’s it gonna be?’ Well, the police left the stage, the house lights were dimmed and James finished his show. Those experiences all left a lasting impression on me and my genetic predisposition for music.”

“Duke is an incredible musical historian.

He makes it easy to understand.

You get a good feeling from him.” 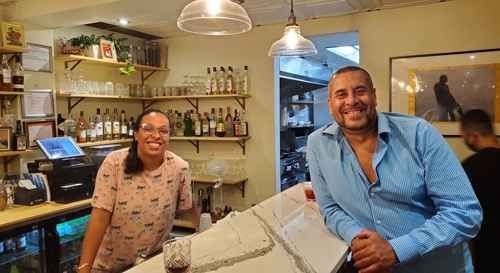 Duke filming an online episode for Taste Of The Caribbean with Lee-Anne Millaire Lafleur, owner of Resto Palme

The family eventually moved to NDG, where Duke grew up, attending Northmount High in nearby Cote-Des-Neiges.

“I had an idea that I would like to teach in prisons, I was going to night school in the hopes that I could improve my grades and qualify for entry into a teaching program.” However, a chance meeting with a friend would change the course of Duke’s life.

“A friend of mine in NDG had a show on CHAI, a community radio station. He suggested that I come along with him and check it out. He encouraged me to speak up during the show, and after three weeks he said; ‘You’re much better at this than me – I’m going to let you take over the show’. I continued from ’91 until mid ’95. By the time I finished up, I was doing shows on Hip Hop, Blues, Classical music and Jazz.”

Duke received an invitation from CJAD to come on air and talk about the GRAMMY Awards. The station management team was impressed and invited Duke to host a music show. “I came on board and hosted Saturday Night In Montreal With Duke Eatmon from 7 – 11pm. I also worked with Bill Brownstein on his CJAD entertainment program.” 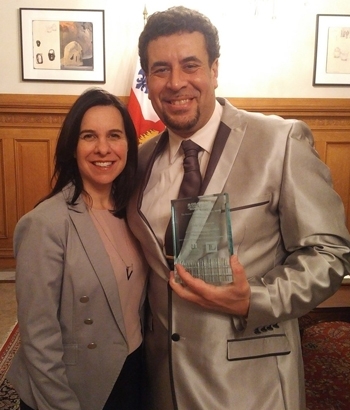 For a single parent of two children, the additional pay cheque was useful. “My parents have been very helpful in looking after the children when they were younger. I’d pick up my daughter at school, take her to my parents and then go and do my radio show, usually at night.” When Duke interviewed performers coming to Montreal, he’s often take his children along. “My kids thought these celebrities were just my friends.” In fact, Duke’s musical knowledge came through during his interviews, and the artists did indeed come to consider him as a friend. “I am thorough, because I want to document their contribution, and I want to make sure I get the story right. Some of the artists I interviewed and got to know better did offer me jobs later. At times I would agree to do security for artists while they were in town.”

Duke has also taught music at John Abbott CEGEP and McGill University in 2005 and 2006. “I love talking to teenagers. During a course about 60s music at John Abbott, I introduced the class to the The Beatles’ Sgt. Pepper’s Lonely Hearts Club Band. A year later I met a student from that class who showed me her copy of the CD. She said; ‘You got me so excited about this album that I bought it and really enjoy it. It changed my appreciation of music!’ As a teacher, that warms your heart.”

Duke’s employment with K103 came to an end in December 2003; but he answered a call from CBC in January 2004. He started with his weekly music column on Home Run, (now called Let’s Go). It’s been a terrific relationship, with Duke taking on more and more assignments. “You work in a building with thousands of people, and I wanted to break out and do more, including current affairs and politics. I get that opportunity when I’m asked to sit in for a vacationing on-air host, and I follow the format of that program.”

Three years ago Duke became a full time CBC staffer, and his contributions to the station have been recognized. In 2017, Duke Eatmon received the inaugural Montreal Dynastie Award for Anglophone Radio Personality of the Year, coinciding with Black History Month.

Duke tells me that he is most proud of the 2017 Prince Exhibition that the City of Montreal commissioned him to curate as part of Black History Month. “We had musicians and celebrities coming in from all over the world; and the exhibit was very favourably received. The Principal of James Lyng High School brought a larger group of students for a private tour. To date, that’s my favourite professional accomplishment.”

This past summer, Duke filmed a series of short internet vignettes for Taste of the Caribbean, to be aired this fall. The episodes were filmed in Montreal, The Eastern Townships and Ottawa. For dates, please consult www.totc.ca

At home, Duke is immensely proud of his two children, now young adults. His 23 year-old daughter is studying to be a teacher at Concordia, and his 18-year old son has great athletic potential. “He’s Major League Baseball material, at 6’3” and 240 lbs, he can hit the ball to the 400 foot marker with relative ease.”

Being a single parent is a challenge. Working to develop a broadcasting career with unusual working hours at the same time adds to that challenge. Duke’s sometimes unorthodox solutions have proven to be a successful formula for parenting and broadcasting. Bravo Duke!

Duke Eatmon can be heard regularly on Let’s Go!, the CBC radio drive show with Sabrina Marandola, Monday to Friday from 3 to 6pm.