Points of Light brings together six works spanning almost forty years of moving image art, attesting to the range and depth of the Musée’s video collection. The selection explores the interplay between the evolving properties of the medium and the conceptual, social or psychological content of the works – between tiny pixels of light and vast zones of aesthetic and intellectual illumination. 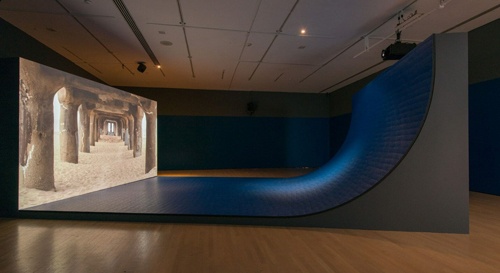 Hito Steyerl’s essayistic, Internet-inflected, documentary-style saga of finance, combat and water, Liquidity Inc., sets the theatrical tone. Presented in a sculptural environment, it requires viewers to sit on judo mats on a structure apparently adrift on computer-generated waves and news footage of hurricanes and tsunamis.

From the fabled iconoclast Jean-Luc Godard, who has been at the forefront of the politics of cinematic form, Scénario du film Passion is a probing philosophical inquiry that revisits the script of his own film within a film, Passion. In the same gallery, Gary Hill’s Loop Through offers a double portrait of actress Isabelle Huppert, who is seen on two vertically-mounted monitors positioned to reflect the distance between the two cameras that simultaneously recorded her. This creates a perplexing triad with the viewer that is further compounded by the presence of Huppert’s younger self in Godard’s work, shown opposite. 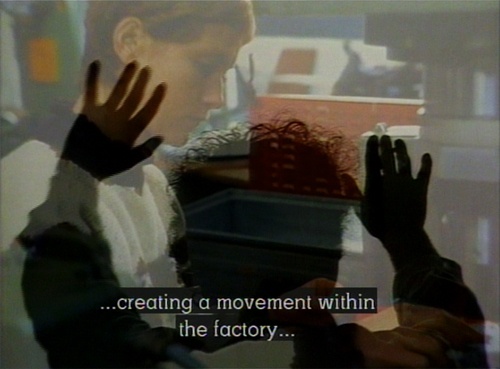 Angelica Mesiti’s Prepared Piano for Movers (Haussmann) and Christian Marclay’s Telephones both playfully coax music from everyday activities: the former features piano movers carrying an unwieldy instrument up a Parisian spiral staircase, where the jolts and movements of the climb trigger musical sounds, while the latter is a montage of Hollywood films in which multiple unrelated characters shown dialing, followed by phones ringing and a succession of people answering, are caught in a comically dysfunctional switchboard of broken communication.

Godard’s ardent confrontation with the creative process – the struggle to fill the vertiginous void of the blank page – also animates Nelson Henricks’ Unwriting, a deft and rhythmic four-screen ode to making sense of the world, which beautifully explores the gaps between words, sounds and images.

Reserve your time slot and purchase your tickets online: macm.org