Four young men swear off women to devote themselves to learning – only to fall for four attractive newcomers. Shakespeare’s language reaches its most virtuosic heights in a vivacious comedy that will dazzle and delight. 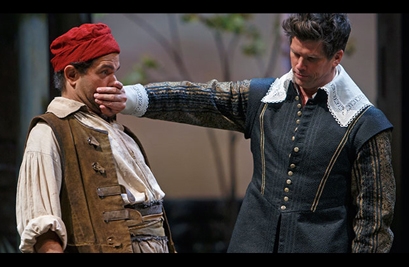 Vowing to devote themselves to study, the King of Navarre and his courtiers Dumaine, Longaville and Berowne swear off the company of women for three years. But no sooner is their oath taken than it is put to the test when four attractive young women – the Princess of France and her companions Katherine, Maria and Rosaline – arrive on a diplomatic mission. Meanwhile, an eccentric Spanish nobleman, Don Armado, has become infatuated with a country wench, Jaquenetta. In the ensuing flurry of mix-ups and masquerades, it becomes clear that not all of life’s lessons can be learned from books.