After having achieved success as an executive with Proctor & Gamble, Nortel, McKinsey & Company and as President of Montreal International; Dominique Anglade embarked on a new challenge in politics as the Liberal MNA for the Montreal Sud-Ouest riding.  First elected in 2015, she rose quickly in the ranks of the MNAs, serving as Minister of Economic Development, Innovation and Export Trade and as Deputy Premier in the Couillard government.  As of May 11, Dominique is the Leader of the Quebec Liberal Party and Leader of the Official Opposition in Quebec’s National Assembly.

I first met Quebec’s new Leader of the Opposition in her riding office just 2 days after her by-election win in 2015. It was the first time she had entered her new office. For that matter – at the time Ms. Anglade had not even been sworn into office as one of the newly elected MNAs. Fast forward to May 2020; and after travelling 30,000 kilometres while criss-crossing Quebec in her campaign for the Liberal Party leadership – we had the opportunity to re-connect.

“I’m especially proud that I received nominations in all 125 ridings across Quebec. The people I visited could see the passion that I have for social engagement. That’s something I learned from my parents. My mom was an activist and a believer in women’s rights. I walked with her as she went door-knocking to campaign. My father was also politically active, which is why our family had to flee the Duvalier regime in Haiti.”

Dominique Anglade has an impressive resumé as an engineer, management consultant, social activist in Haiti, and as a Member of the National Assembly during the past five years. Dominique shared how her path in life has led her to a role of public service. That sense of community involvement also brought her to help the people of Haiti by establishing the KANPÉ Foundation with her friend Régine Chassagne of the immensely popular band, Arcade Fire.

Here’s a glimpse in of Dominique’s life before politics and her personal mission to make a positive impact. 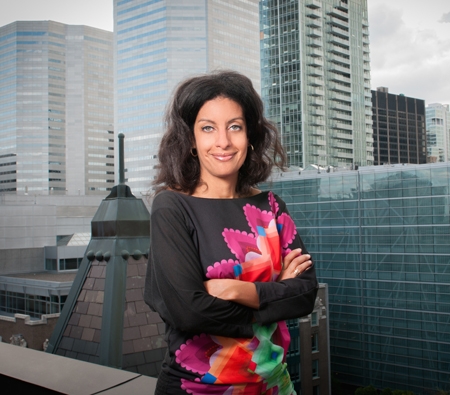 Equipped with an Engineering degree and an MBA from HEC, Dominique served as President of Montreal International before politics

“My parents were educators and part of the intellectual community in Haiti; a kind of elite that had reproduced itself and had existed ever since the country’s independence. However, that community was collapsing during the Duvalier dictatorship.  Consequently, my parents moved to Paris in 1969 because it was not safe for them during the Duvalier regime in their home country. They subsequently moved to Montreal, where my Dad was a co-founder and taught at Université du Québec a Montréal (UQUAM), and my Mom taught high school.”

“I was born here in Montreal, but when I was fourteen, my parents wanted to move the family back to Haiti. Aristide was in his ascendancy, but not yet in power. As a test, we went or a visit in 1986. The day we were supposed to leave, my Dad was arrested, and held without charge for nearly a month. My mother and I were at the airport, and we didn’t know what had happened to my Dad.” Georges Anglade was eventually released and the family was re-united.

“After Aristide came to power in 1988, we moved to Haiti. I was 14, and it was hard for me to leave my friends here in Montreal. On the other hand, I got to know my extended family very well because we lived in close proximity to each other.”

After three years, Dominique had a strong desire to return to Montreal. “When I was seventeen, I told my Mom that I was returning to Montreal to complete my schooling. She said something about me being young, and that we’d discuss it. I said that I wasn’t asking for permission, but rather that I had made up my mind.” And so, at seventeen, Dominique Anglade returned to Montreal, completed her CEGEP and subsequently obtained her Engineering degree at École Polytechnique at Université de Montréal in 1996.

“I feel a great sense of responsibility of representing all the people that see me as a model because I’m the daughter of immigrants, because I’m a female, but I’m really excited about what we have to accomplish” ….. Dominique Anglade

Even while still a student, Dominique proved to be a highly energetic person, serving as President of the Student Society, and entering all the engineering competitions that she could. ‘Downtime’ was not part of her vocabulary.

After graduating, Dominique went to work for Proctor & Gamble, including a two year stint in Cincinnati. “If I was going to progress with P & G, it would have meant relocating to Cincinnati, and I just wasn’t prepared for that kind of move. My next employment was with Nortel, which was in the beginning of the company’s decline. I worked very hard, and at the same time I was taking night courses at HEC (Haute Etudes Commerciales) for my MBA. I was also President of the Junior Chamber of Commerce.” Thinking back and smiling a little ruefully, Dominique adds; “I was worn out…”

Dominique then landed a job with the Montreal office of McKinsey and Company, one of the world’s largest management consulting firms. “I worked at McKinsey for seven years, involved with the transformations of major corporations.”

“I was working on a project in Vancouver for McKinsey, and I met the man who would become my husband at a Halloween party. We maintained a long distance relationship until we had our first child. I felt that it was important for our child to have both parents around, and what was initially going to be a short stay became longer, because we had our three children while we were in Vancouver.”

“I was volunteering with the Liberal Party of Canada in Vancouver, and I felt that we should do more – for people less fortunate. And then one day I thought – why wouldn’t I do it for Haiti?”

“Régine Chassagne and I had been friends when we were four or five years old, but we hadn’t maintained contact – but we had a common Haitian heritage. She had become very successful as the singer of Arcade Fire.” Through a mutual friend, Dominique and Régine reconnected. “I said that I wanted to do something for Haiti, and she had the same idea. We discussed and planned, and developed the concept of a foundation and how it would operate. We named our foundation KANPÉ, which in Haitian Creole means ‘to stand up’ – with an emphasis on self reliance. Whenever possible, we planned to work with existing organizations such as Partners in Health. If they were already on the ground and being effective – it made good management sense to help them rather than set up a parallel organization.”

KANPÉ was built of six pillars of focused activity. The goal is to help families develop financial independence so that they can provide the basic necessities of life for themselves and their children.  These include; Nutrition, Health, Education, Safe Housing, Agriculture and Leadership.

The plan was to launch KANPÉ on January 17, 2010. However, Dominique’s life changed abruptly on January 12, 2010 when a major earthquake destroyed so many buildings in Haiti. “It was a catastrophe! We lost my Dad, my Mom, my uncle and one of my cousins.”

Even is that time of devastating personal loss, Dominique stated: “I knew then that we had to focus on KANPÉ even more! During our first year of operation, we helped 331 families, accompanying them with our field personnel. The objective is for each family to develop two sources of revenue. This will enable them to feed their children and provide an education. We provide seeds so that they can start growing crops, and animals such as cows and goats to provide milk. We maintain a constant support and encouragement for the families so that they can graduate. After our first year, 97% of the families were maintaining two sources of income.”

“In a very Canadian way, we want to make things work for the people we are helping. Rather than give them food and money, we are helping them to produce their own food and through education, help them to break the cycle of poverty. We bring the concept of ‘best practices’ to help our families.”

As an elected member of the National Assembly, she is permitted to be a Board member of a non-profit foundation, but in her role as Leader of the QLP, she won’t have time for her previous hands-on involvement. “I’ll always support KANPÉ but we have an excellent Executive Director and a staff and they can stand on their own now.”

During our first conversation after her 2015 electoral victory Dominique stated; “My riding of Sud-Ouest is a microcosm of Montreal. We have second and third generation immigrants; we have a large senior population, a lot of young professionals buying condos, and yes – we have poverty as well. I believe that we can build bridges between all of these components to build on the existing sense of community here in the Sud-Ouest. “

In 2020 and as party leader, that optimistic vision has been extended to the entire province. “I recognize that we have differences, but I believe there are more things that unite us than separate us. We can find enough common ground and build on those strengths to build a Quebec that works for all regions, from the Saguenay to the Beauce and Montreal. We want the regions and their people to realize their potential. To do that, we have to build a modern Quebec – a Quebec that is open to the world.” In her leadership campaign platform, Dominique called for a five-point Charter of Regions, with a view to ‘restoring equity among the regions by ending disparities’.

“I believe that the environment can be an economic pillar of the Quebec economy.”

Identity politics is a non-started with the new party leader; who states emphatically; “I won’t play division politics.” Indeed, it was that issue that caused Dominique to leave the CAQ, a party she co-founded. She would not accept that party’s stance on restricting minority rights. “Immigration is important to the economic development of Quebec. We need the talent and drive to succeed that immigrants can contribute to our society.”

On a personal basis, Dominique and her entrepreneur husband juggle a busy household with three children. “I’ve always been a working Mom, so the children are used to it. The National Assembly sits twenty-six weeks a year; and we’re in Quebec City three days a week. Of course there’s lots of work still to do when the Assembly isn’t in session. We’re a happy family…my husband and I are problem solvers and so when we have an issue – we look at it together and come up with a solution.”

As our conversation draws to a close, Dominique Anglade: political party leader, wife and mother states; “I’m happy to be doing what I do. Having an impact on your world is important, and if I’m having an impact – that’s great.”

The editors at Les Affaires magazine got it right when they predicted that Dominique Anglade would be 1 of the 15 women who would move Quebec forward.