It contains 51 chapters and about 30 sidebars and charts of Expos memories from 1969-2004. Accompanying the 88,000 words of text are 92 photos or illustrations so the book is lavishly full of art. 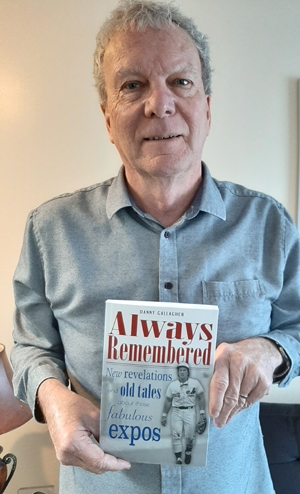 In the course of writing and researching the book, Gallagher conducted 94 interviews. The content of the book is in the form of vignettes, some long, some short, a style that readers will see has been prominent in most of the books Gallagher has written since 1997.

This is Gallagher’s 10th book, sixth about the Expos franchise. Since 1988, he has written hundreds of articles and all of these books about the Expos. Why did he write this book? It’s simple: to keep the Expos legacy alive. The book brings memories of the past to the present, allowing readers to enjoy these memories now. The book bridges the gap for readers and fans until Major League Baseball returns to Montreal.

The book is available at Chapters/Indigo stores and can be obtained through pre-order at indigo.ca. You can also order copies by calling 1-365-881-2389 or email [email protected].

Chapter 1 details how Jack Billingham almost became an Expo after being claimed in the 1968 expansion draft. His brother Richie volunteered to drive Jack’s new yellow Chevy station wagon carrying his belongings to Montreal. When Richie reached upstate New York, he pulled over into a motel and heard on the radio that Jack had been traded to Houston to complete the Rusty Staub made in January. Richie turned around and drove to Houston.

Chapter 51 deals with how Expos fans have dealt with the loss of their team to Washington and the reaction of fans about the Nationals winning the 2019 World Series.

And in between Chapters 1 and 51, there are many other memories that will make you smile, laugh or maybe even shed a tear or two.

There are special chapters on Gary Carter, Andre Dawson, Tim Raines, Steve Rogers, Vladimir Guerrero, Larry Walker, Brad Wilkerson and many others. There is also a chapter based on Gallagher’s interview with former commissioner Bud Selig.

If you are looking for nuggets and stories you have never heard before about the Expos, the book has a bunch of them. Read about the conspiracy involving umpire Bob Davidson, who ruled that Walker tagged up too early in the 22-inning game on Aug. 22-23, 1989.