With a following like a rock star, Montreal’s youthful conductor will remain linked to “the people’s orchestra” for his professional life

In early September, the public relations department had called a Monday morning press conference for a major announcement concerning L’Orchestre Métropolitain. I feared that the announcement would be that the talented and globe-trotting conductor would be leaving his post. Fortunately (and happily) I was wrong. The occasion was the exact opposite; the announcement was that Yannick had just signed a lifetime contract with the orchestra that he has led for the past nineteen years. There was a substantial crowd of season ticket subscribers, the complete Board, Federal Minister of Cultural Affairs Mélanie Joly, and other elected officials. 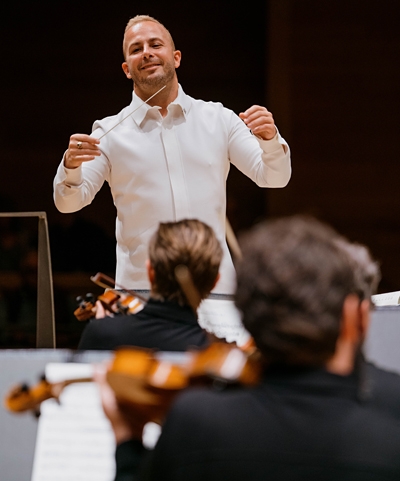 Yannick Nézet-Séguin leads the Orcehestre Métropolitain during their first performance of the 2019-2020 season.

It’s been a remarkable journey for the son of two Montreal academics, who started playing piano at five and then at age ten, decided that he wanted to be an orchestra conductor.

On that bright sunny September morning, there was a refreshing enthusiasm in the air. Frankly – it was a love-in. Yannick is the Artistic Director and Principal Conductor for the orchestra. One of the unique hallmarks of this orchestra is that they go out into the city’s neighbourhoods to perform in churches. For a modest ticket price, people can hear the same concert material that will be presented at Maison Symphonique. During the summer months, Orchestre Métropolitain is a mainstay at Festival Lanaudiere, Festival Saint-Sauveur, and in Montreal-area parks. This past summer they drew more than 60,000 people for an outdoor concert on Avenue du Parc. Hence the name; “the people’s orchestra”.

Yannick is also the Music Director for New York’s Metropolitan Opera and Conductor and Artistic Director for the Philadelphia Orchestra. From 2006 to 2018 he was the principal conductor for the Rotterdam Philharmonic Orchestra, and still holds the title of Honorary Conductor. Yannick has also conducted with The London Philharmonic Orchestra and the Scottish Chamber Orchestra. When asked how his other orchestra employers feel about his lifetime contract, he responded; “They admire my loyalty, and they also see it is a positive in my relationship with them.” 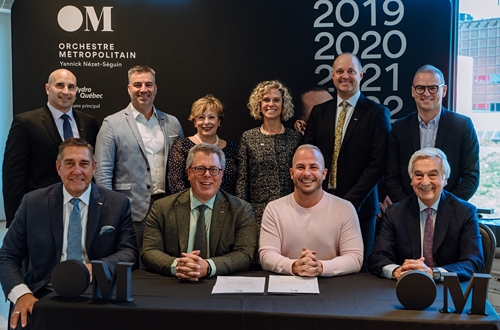 This open-ended commitment is based on mutual trust. The new contract grew out of a desire expressed by the Orchestra’s management and musicians and by Yannick Nézet-Séguin, who began his 20th season with the OM in September. Such contracts between a young conductor and an orchestra he or she didn’t found are extremely rare.

“This is a special day for the musicians of the Orchestre Métropolitain and myself, the beginning of a new chapter,” stated Yannick Nézet-Séguin, who will conduct his 600th concert from the OM’s podium at the end of its 2019-2020 season. “Montreal is my hometown, my home port. It’s where I was born, where I grew up and where I received my musical training. It’s where my family lives. And the Orchestre Métropolitain is the first of my musical families. I get a little emotional when I recall all the wonderful moments shared with Montreal audiences and how far my musicians and I have come. They have trusted me from the start, when I was just 25 years old. The trust was mutual and our relationship has only grown over the last 20 years. We are now inseparable. Together, we have learned the value of work and of patience. We have followed our dream of surpassing ourselves in pursuit of a common goal: to share our love for music. I look forward to the coming years at the Orchestre Métropolitain with great enthusiasm for the many projects in store and for all that has been accomplished to date.”

“A leader serves… I serve the musicians

and together we serve the music” 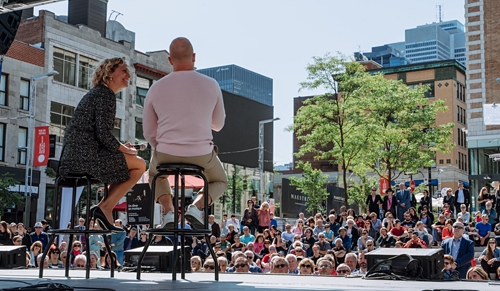 Yannick during the announcement love-in at
Place des Festivals

Yannick explained to me how this unique contract came about. “We were touring in France, playing almost every night and it was good… really good. Just when I thought we’d hit a musical peak, we’d go to another higher level the next night. The ‘band’ was playing really well, and I was feeling so proud of them. One night, I was enjoying an after concert buffet and some wine, and I said ‘I’d love to be your conductor forever!’ I didn’t think much of it at the time, but someone in the room did. That led to a casual conversation and then more serious conversations, and finally to our announcement today.”

Continuing, Yannick states; “This contract really takes the pressure off and enables us to dream more. It gives me more liberty, and because of our mutual confidences, we’re removing the time barrier.”

“We want to give concrete expression to an agreement whose terms reflect the special relationship between Yannick and his Montreal orchestra,” explained Jean R. Dupré, President and Chief Executive Officer of the Orchestre Métropolitain. “This is an open-ended contract with the conductor everyone dreams of having on their podium, who also happens to be a Montrealer in love with his city and a person with whom our musicians have developed a sound, musically rewarding and extraordinary human relationship. We are honoured that Yannick has agreed to continue his musical mission here with the musicians and audiences – all without anyone wondering how long he’ll stay.” 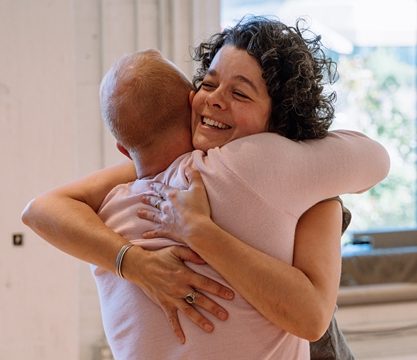 The orchestra’s management called all the musicians in before the announcement – so that they would be the first to hear the news. The result was an emotional outpouring of emotion as they applauded and surrounded their conductor, their leader and their friend.

Yannick continues the conversation; “There were some lean years, and a period when the orchestra almost didn’t make it. But many Montrealers stepped forward to join our corporate sponsors. Now – we have more partners than ever!”

The orchestra continues to gain a solid international reputation; and this November will tour to Chicago, Ann Arbor, New York City and Philadelphia.

Toward the end of our conversation, Yannick stated; “Montreal is a big cultural capitol. We’re not only going to make that pie bigger – we’re also going to make a lot more pies.

The Orchestre Metropolitain had started its twentieth season, and this season promises to be special. For information about the concerts, please visit: www.orchestremetropolitain.com/en or call: 514-842-2112 or toll free: 1-866-842-2112.