Based on A Midsummer Night’s Dream by William Shakespeare

Created and directed by Katie McHugh

New York City-based Yonder Window Theatre Company has journeyed to Quebec to develop and premiere The Dream Project 3.0, Montreal, a multilingual, multidisciplinary collaboration between North American artists from Mexico, United States and Canada. This unique production performs from October 9-13 at the expansive Universcène. 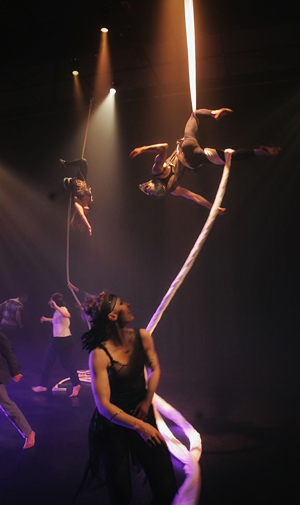 In this project, Shakespeare’s ageless tale of A Midsummer Night’s Dream is deconstructed and reinvented into a high-flying spectacle. Complete with original music, dance, and aerial choreography; Spanish, French, and English text; and cutting edge design, The Dream Project encompasses the most compelling art forms of North American culture.

In 2017, Yonder Window Theatre Company began The Dream Project 1.0 in an art gallery in San Miguel de Allende, Mexico. The production then traveled to Brooklyn for version 2.0, New York in 2018 to continue its development. Now, Yonder Window is shaping the third and final round of creation, The Dream Project 3.0, Montreal with a full design team and triple the aerial rigging, making it the grandest version of the show so far.

This exceptional production will be performed at Universcène, a warehouse in Hochelaga often employed by circus companies such as Cirque du Soleil and Cirque Eloize. “As a company that focuses on playing in 360 degrees of space, having a venue we can mold to fit our theatrical vision is thrilling; audiences should feel like they are entering into another world, a dream fantasy where anything is possible,” said Katie McHugh, The Dream Project creator and director.

Local Montreal performers include Brett Watson (Oberon), who has been with the project since its conception back in 2017, and Oliver Koomsatira (Puck), Michelle Rambharose (Hermia) and Robine Kaseka (Helena), who were welcomed to the cast this year along with cirque performers Nadine Louis and Caterina Pio.

McHugh is inspired by each new, distinctive company member through the course of this project, “Collaborating over linguistic and cultural barriers provides us with comfort. Instead of fearing our differences, we celebrate them at a time when the world needs this more than ever. The importance of pursuing ‘our dream’ now could not be more pertinent,” she said.

Yonder Window Theatre Company is dedicated to the exploration of cross-cultural and social relationships. Through the use of interdisciplinary performative arts, they seek to create innovative and relevant productions that explore the universal themes of the human experience both domestically and abroad.

THE DREAM PROJECT 3.0, Montreal- 7 performances only

October 9-13: Wednesday-Sunday at 8pm; Saturday and Sunday at 3pm

Tickets: $25 online or at the door