Gloria Bass was pursuing her Arts degree at McGill when she met the man she would marry – and as fate would have it, her marriage indirectly led to a lifelong career of creating unique custom made jewelry. Gloria has blended her artistic design talent with the discipline and skill of a metal craftworker to produce award-winning jewelry.

We recently met in her Greene Avenue boutique, surrounded by beautiful bracelets, necklaces and her signature stacking rings. Why wear one when your fingers can accommodate three or four? “I believe that your jewelry should make a statement,” Gloria stated during our conversation.

Following their graduation from McGill, the young couple moved to San Diego on student visas so that Richard could complete his Master’s degree in psychology. With time on her hands, Gloria was looking for something to do. “I had always worked with my hands…I made my own clothes, did needlepoint and sketching. I was in an art supply store and started talking to a salesman about different types of art, and he encouraged me to consider working in metal.”

The art supply sales clerk turned out to be an outstanding craftsman. “I was blown away – his jewelry was art! He offered to teach me – and I explained that with my husband studying, we didn’t have much money. He said that he’d give me five, two-hour lessons for $25. Well… the lessons were always longer than two hours.” 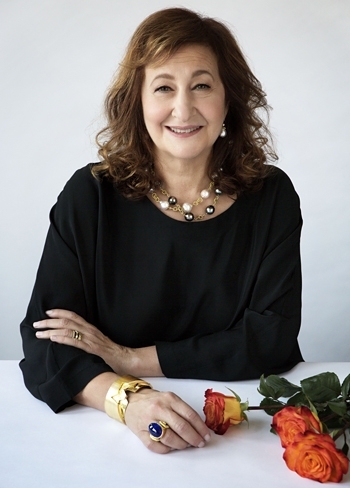 By now Gloria was excited about making jewelry, and she and her husband discussed the possibility of her attending a two month workshop at the Penland School of Craft. Located in the Blue Ridge Mountains, Penland’s is the foremost craft school in the US. “Richard said ‘Go for it!’ and so I did. It was at Penland’s that I discovered my true métier – working with metal, especially gold.”

Gloria came back to Montreal after completing her course, and entered a competition at The Visual Arts Centre. “I jumped right in – and decided to make a hinged handbag, which was very complicated to make, and I ran into a problem. I went to see Jonny Blackwood who had a shop on Drummond, and he solved the problem. He said; ‘Why don’t you come here to work?’ “That started me on a six year apprenticeship.”

“Johnny gave me a compliment, saying; ‘You’re only here because you work hard.’ He also told me to work in gold.” Gloria continued to read up on design techniques and working with gold, adding to the knowledge she had gained at Penland and during her apprenticeship.

“During this time I taught jewelry making at the Saidye Bronfman Centre (now the Segal Centre for the Performing Arts) for twelve years. I went out on my own and had a small shop on Queen Mary for six years.” Gloria moved to her Greene Avenue studio and workshop in Westmount in 1993. “When I was starting out, I often saw clients at my home – and some of them are still clients today.”

During the early days of her business, Gloria participated in shows such as the Las Vegas Jewelry Show, but found that there was only a small group of retailers who appreciated unique design. That turned out in her favour, because she has found a solid position in the upscale jewelry marketplace. “I’ve had a gallery in New York that has carried my work for 35 years.”

Gloria told me that she likes to have a connection with her clients; “I like to get to know their personalities so that I can suggest or design something that complements their personality.” With a somewhat mischievous smile, she adds: “I also like to push the envelope a bit.”

Gloria remains proud of a winning a Royal Canadian Mint competition to design a line of jewelry. Only four designers would be selected – two from Canada and two from the United States; and she was one of the two Canadian designers selected. The jewelry was promoted in major North American magazines, such as Town & Country. While operational difficulties prevented the program from being a success; Gloria came away with two important accomplishments. She won a prestigious competition and received North American promotion for her work. Having retained the legal rights to her work, she was also able to buy back her inventory.

Gloria’s jewelry has a timeless quality to it. “I recently saw a client who was wearing a ring that I made for her twenty years ago – and she said; ‘Look Gloria – it still looks terrific!’ 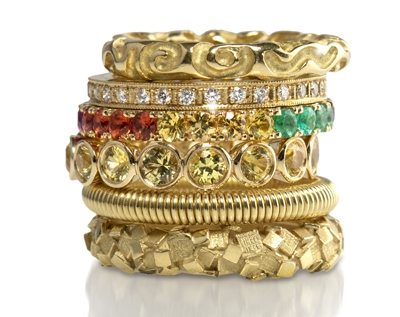 “I also remake jewelry for our customers. People come here with their heirloom jewelry with valuable diamonds because of my good reputation. I work within their budgets, and tell them; ‘You’re going to have something precious.’ My passion for this work is still there…I get very excited when I work with something in my collection.”

“In addition to our stacking rings, we’re known for our coil work.” Gloria’s craft workers make coil wire by hand, coiling the outer wire around the inner supporting wire – all in gold. “We work in both yellow and white.” There are some lovely delicate coiled pieces on display in her intimate Greene Avenue showroom.

Gloria continues to introduce new designs for the evolving marketplace. “Many younger women purchase for themselves; and they prefer delicate jewelry.  I’ve created new items for this market.” Gloria shows some delicate earrings, where she used the physiology of the ear itself to support the earrings. “We’ve made these so that she can wear two, three of four at a time.”

In another nod to growth of online shopping, Gloria states; “We’re also revamping our website to make it easier to purchase online.”