In her 2019 CBC Massey Lectures, bestselling author, journalist, and human rights activist Sally Armstrong argues that the future of humanity depends on the equal status of women and girls.

ABOUT THE LECTURE
The facts are beyond dispute: when women get an education, all of society benefits. When they get better healthcare, everyone lives longer. In many ways, it has never been a better time to be a woman: a fundamental shift has been taking place all around us, and we’re all better off. Yet the promise of equality still eludes half the world’s population. 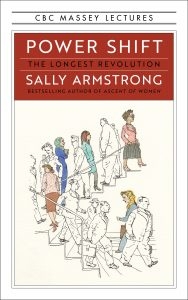 In her 2019 CBC Massey Lectures, award-winning author, journalist, and human rights activist Sally Armstrong illustrates how improving the status of the female half of humanity is crucial to our collective surviving — and thriving. The past can teach us much about this: Sally Armstrong examines the many beginnings of the roles women have played in society, and the evolutionary developments for women over millennia in the areas of sex, religion, culture, politics, and economics. What we learn is that gender inequality comes at too high a cost to us all, and that the only way forward is for women to become truly equal with men.

SALLY ARMSTRONG is an award-winning author, journalist, and human rights activist. She is the author of four bestselling books: Ascent of Women: A New Age Is Dawning for Every Mother’s Daughter, The Nine Lives of Charlotte Taylor, Veiled Threat: The Hidden Power of the Women of Afghanistan, and Bitter Roots, Tender Shoots: The Uncertain Fate of Afghanistan’s Women. Armstrong was the first journalist to bring the story of the women of Afghanistan to the world. She has also covered stories in conflict zones from Bosnia and Somalia to Rwanda and Afghanistan, Iraq, South Sudan, Jordan, and Israel. She is a four-time winner of the Amnesty International Canada media award, the recipient of ten honorary degrees, and an Officer of the Order of Canada.