Visit the World Press Photo Exhibition 2019 on its world-wide tour showcasing the stories that matter with photography from the 62nd annual World Press Photo contest. Viewed by more than four million people in over 100 cities and 45 countries each year.

The winners were chosen by an independent jury that reviewed more than 78,801 photographs entered by 4,738 photographers from 129 countries. 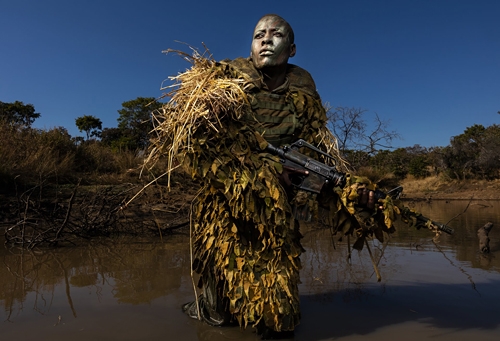 Petronella Chigumbura (30), a member of an all-female anti-poaching unit called Akashinga, participates in stealth and concealment training in the Phundundu Wildlife Park, Zimbabwe.

Akashinga (‘The Brave Ones’) is a ranger force established as an alternative conservation model. It aims to work with, rather than against local populations, for the long-term benefits of their communities and the environment. Akashinga comprises women from disadvantaged backgrounds, empowering them, offering jobs, and helping local people to benefit directly from the preservation of wildlife. Other strategies—such as using fees from trophy hunting to fund conservation—have been criticized for imposing solutions from the outside and excluding the needs of local people.

Photographer
Brent Stirton
Brent Stirton is a special correspondent for Getty Images, and a regular contributor to National Geographic magazine as well as other international titles.