“Some people think I’m crazy, but if you’re not doing what you love, then I think you’re crazy.”
– Miles Daisher / Base jumper

The JACKALOPE action sports festivals promises to deliver adrenaline and thrills when it welcomes a contingent of elite extreme sports athletes from August 16 to 18 at the Olympic Park’s Esplanade. First, the incomparable Bob Burnquist, the most illustrious medal winner in skateboarding history, will attract an epic crowd of sensation seekers to his exclusive demo. The base jump competition, for its part, has become nothing short of a major draw for world athletes itching to leap off the top of the iconic Olympic Stadium. Only 10 athletes have been selected to take part in the competition, including legends Miles Daisher and Cody Matechuk. The 8th edition of JACKALOPE promises to be a total rush, with an even more exciting and amped-up ambiance, thanks to a new music program featuring hip hop groups the Dead Obies and 88Glam. 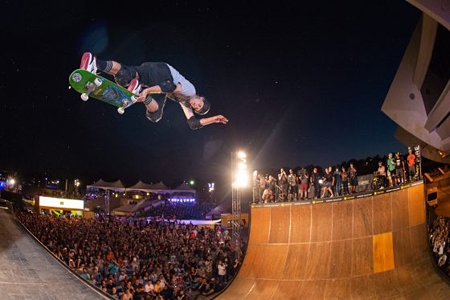 SKATEBOARDING
Brazilian Bob Burnquist is one of the best ramp skateboarders in the world, renowned for tricks that very few athletes can pull off as well as his gravity-defying feats. He’s been crowned 10-time world champion, picked up medals 30 times at the X-Games, and was voted best skateboarder of the year on no less than seven occasions. Bob Burnquist is also a licensed skydiver and base jumper. He skillfully blends them all to pull off feats of prowess unmatched to this day. He’ll be joined by equally amazing skateboard and BMX athletes to blow your mind with his demo on the evening of August 17!

JACKALOPE also presents the only Canadian stop on the World Cup. Spectators will have the chance to see the astounding Brazilian Rayssa Leal in the women’s competition. At only 11 years old, she has already owned the world’s most prestigious podiums. Québécoise Annie Guglia, for her part, will try to hang on to her title this year. In the men’s competition, you can catch last year’s winner, Brazilian Ivan Monteiro and JACKALOPE regular, American Greg Lutzka, Canadians Andy Anderson and JS Lapierre as well as tons of other talent from the four corners of the earth.

JACKALOPE not only offers an amazing show and the chance to see the world’s elite athletes, but it also cultivates and promotes local talent. The organization organizes a competition for kids 13 year olds and under and gives seasoned boarders the chance to shred on the skateboarding installations.

BASE JUMPING
Who will nail the best jump? Nobody knows, but athletes will have ample chance to tweak their technique since the competition is set to take place every evening during the festival, unless the wind has other plans for us…

American Miles Daisher has over 7,200 jumps and 4,500 base jumps under his belt. Canadian Cody Matechuk, a multiple X-Games medal winner in freestyle snowmobiling will try the first base jump from a snowmobile. Are you getting this? And with other impressive awards to their name, the eight other athletes in the competition are definitely to watch out for. Sunsets at JACKALOPE will be sizzling!

BOULDERING
Bouldering’s popularity is climbing in urban settings. JACKALOPE is the event if you want to see how the pros do it and try it out yourself. It, along with skateboarding, has also been selected for the Tokyo Olympic Games in 2020. Come watch Dylan Barks, Sierra Blair Coyle and other esteemed company power to the top.

FIXED GEAR
You say Montréal, we say fixie! And JACKALOPE just had to showcase this little beauty. Professionals and amateurs will be flocking to the Olympic Park competitions to vie for the gold, with Québécoise Raphaële Lemieux part of the peloton.

JACKALOPE: LIFESTYLE AND ENTERTAINMENT
With onsite DJs, food trucks, pop-up shops and after-parties, you’ve got to wonder: does summer get any better? Well, the answer is no! And between competitions, you’re invited to test out skateboarding, bouldering, slacklining and even a Harley-Davidson motorcycle. And why not cool it down (but keep it fun) with a wild water gun fight?

Behind the name
A JACKALOPE is a mystical, imaginary animal that has the physical attributes of both a jackrabbit and an antelope. A symbol of self-deprecation, the JACKALOPE also inspires creativity, strength and performance. True to its namesake, JACKALOPE is a unique event, an international showcase of raw talent with outdoor fun and stimulating exchanges.

Visit the box office to be part of the most happening sports event of summer (free for kids 10 and under).
For more information visit: https://jackalope.tribu.co/