Artistic Director of the Canadian International Organ Festival Jean-Willy Kunz and Executive Director Thomas Leslie invite Montrealers to attend an expanded 2019 Grand Organ Festival. The largest ever, the festival will run from September 8 to November 1.

This year’s festival will be the most ambitious ever, spanning three calendar months from September to November. The performances will be take place in some of Montreal’s most famous churches and concert halls: including St. Joseph’s Oratory, Mountainside United in Westmount, The Church of St. Andrew and St. ­­­­­­­­­­­­­­­­­­Paul, Christ Church Cathedral, Église Saint-Léon de Westmount, Birks Heritage Chapel, Maison Symphonique and seven other churches. The festival will feature several past CIOC prizewinners who are now young, rising-star organists.

In all, there will be 20 free concerts (two for children) and 15 paid concerts during the 2019 Festival. We’re going to provide some highlights in this article; and the full lineup is available online at www.ciocm.org

The festival begins on Sunday, September 8 with an up close open-console tour of the magnificent organ of St. Joseph’s Oratory from 2 – 5pm. The first of six consecutive free Sunday afternoon concerts will take place on September 15 with David Briggs from the United Kingdom performing Tchaikovsky’s 4th Symphony for organ. Subsequent performances at The Oratory are scheduled for September 22, October 6, 13, 20 and 27; all at 3:30pm and free.

On September 28th at Église du Gesù and on the 29th at Chapelle Notre-Dame-de-Bon-Secours, the 2014 and 2017 CIOC finalist Mária Budáčová will present two concerts for Les Journées de la culture; The Many Aspects Of The Organ.

The following weekend will focus on large part on a three day tribute to John Grew. A chamber music and cocktail at 5:30pm on October 3rd in honour of John Grew will feature some of the finest musicians in Montréal’s early-music scene. Jean-Willy Kunz, organ; Vincent Lauzer, flute; and Suzie Leblanc, soprano will perform at the Birks Heritage Chapel (McGill University).

A Gala Concert on Friday, October 4 at 8pm will pay tribute to John who is the founding Artistic Director of the Canadian International Organ Competition (CIOCM.org), and Professor Emeritus at McGill University where he taught for over forty years. During the Gala Concert at Église du Gesù (1200, rue de Bleury, Métro Place-des-Arts); CIOC first-prize winners Alcée Chriss III (2017) and Christian Lane (2011) will present a star-studded tribute to CIOC co-founder. Tickets are $30 at the door, $25 if purchased in advance and $150 for a post-concert meet-and-greet cocktail reception. ($75 includes the cocktail reception.)

On Saturday, October 5 at 11am, the CIOC will host a brunch: A Toast To John at the historic Maison Forget. ($75 per person)

For people who like to hear trumpets with their organ music, Music for the Royal Chapel on October 3 at 8pm will feature a majestic evening of organ and trumpet music with the organist of the Royal Chapel in the Palace of Versailles. Jean-Baptiste Robin, organ; and Romain Leleu, trumpet will perform at The Church of St. Andrew and St. Paul. Tickets are $30 at the door and $25 in advance.

The Art Of The Organ concert on October 6 at 2:30pm will feature the majestic sounds of the Grand Orgue Pierre-Béique in this concert in collaboration with the Montréal Classical Orchestra, performing organ concertos by Handel and Poulenc. Conductors are Boris Brott & Roï Azoulay; Jean-Willy Kunz, organ; Alcée Chriss III, organ; Cantor Gideon Zelermyer and the Shaar Hashomayim Choir. Maison Symphonique de Montréal. Tickets are $28 to $68 and $10 for students.

Duo Majoya on October 19 at 7pm. Organists Marnie Giesbrecht & Joachim Segger will provide a fun-filled evening. The Alberta duo will showcase new Canadian works for two organists. at Église du Très-Saint-Nom-de-Jésus. $30 at the doors or $25 in advance.

While Redpath Hall undergoes restoration, the CIOC is partnering with McGill University and Christ Church Cathedral to offer Friday recitals throughout October. Sebastian Heindl from Germany will perform on Friday, October 11th at Christ Church Cathedral at 1pm and then again at 3pm on October 13th at the Grand Séminaire de Montreal. In July, Sebastian won first prize at the Longwood Gardens Competition, one of the most prestigious organ competitions in the world.

The 2019 Grand Organ Festival concludes on November 1 with the film Phantom of the Opera. James Kennerley will improvise the soundtrack to the iconic 1925 silent film at Maison Symphonique. The film will be projected on a large screen. Tickets are $32 to $67.

The festival offers many other accomplished musicians in a variety of beautiful and historic churches. All at modest prices. For the complete program, please visit: www.ciocm.org 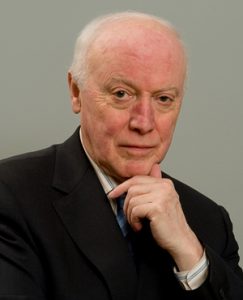 John Grew will be honoured during the
2019 Grand Organ Festival

John Grew is the founding director of the McGill Summer Organ Academy from 1997 to 2015, and he established the university’s early music program. He has been in the forefront of the mechanical-action organ revival in North America having followed Kenneth Gilbert in 1967 to the position of titular organist of the Beckerath organ in Queen Mary Road Church. This was the first modern mechanical-action organ in a Canadian church. Later he collaborated with organ builder Hellmuth Wolff in the planning of the French Classical organ for Redpath Hall which was inaugurated in 1981. From 1991 to 1996 he was Dean of Music at McGill.

John Grew has performed extensively in North America and Europe, and he has been guest recitalist for major conventions and festivals.

Professor Grew holds several honorary doctorates, and in 2010 he received the Distinguished Teaching Award from McGill. In 2011 the Royal Canadian College of Organists awarded him a FRCCO (honoris causa).  He has also served on numerous international organ competition juries in Europe.  He received the Queen Elizabeth II Diamond Jubilee Medal in 2012 for his work in establishing the early music festival, Musique Royale, now entering its 35th season in his native Nova Scotia. In 2014 he was named to the Order of Canada.