I’m floating in a thermal pool surrounded by giant ferns on São Miguel Island in the Azores, Portugal. Steam rises above me while a waterfall cascades over rocks lined by soft moss. Although it feels as though I’m at the edge of the world, this island archipelago in the middle of the North Atlantic is just two hours from mainland Portugal and under five hours from Montreal.

I’m not alone in my appreciation for this cluster of verdant volcanic islands. Tales of a utopian paradise in the Atlantic have been sung since early antiquity. Today’s travelers seeking a haven from the crowds of mainland Europe are discovering the appeal of this autonomous region of Portugal. It’s the perfect destination for those who want to immerse themselves in one of the planet’s most memorable natural settings. 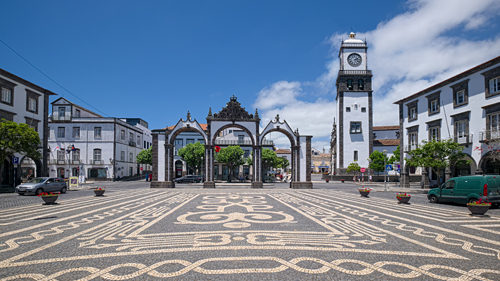 While all of the nine main islands of the Azores are blissfully off the tourist path, the largest island of São Miguel offers the best mix of amenities, luxury hotels and attractions. Founded in 1546, its compact capital city of Ponta Delgada features a seaside promenade, distinctive architecture, a Renaissance fortress and many public museums.

One of the most fascinating attractions is the Carlos Machado Museum, located within a former convent in the heart of town. Created in 1876, its fine collection of taxidermy and historical artifacts captures the spirit of the Age of Exploration. From the size of the enormous right whale, bigeye tuna and giant swordfish on display within its Natural History Museum, it’s easy to imagine why early mariners described the waters surrounding the Azores as full of mythic creatures. 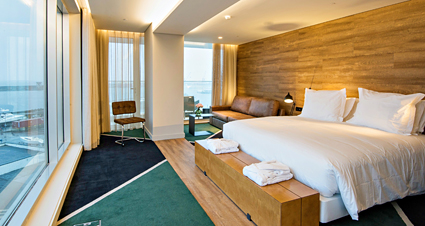 More treasures await within the Sacred Art Museum, notable for its paintings, gold and silver collections, as well as baroque architecture featuring black basalt and white limestone. These stones are also used to create the trademark patterns of the calçada portuguesa (traditional Portuguese cobblestone pavement mosaics) along Ponta Delgada’s picturesque streets and waterfront.

Overlooking the marina is boutique-sized Azor Hotel, a luxury design hotel featuring rooms with sea views; sleek washrooms with rain showers and a rooftop swimming pool. Cuisine is a highlight of a stay as its acclaimed kitchen features a bakery, a wood-fired oven and carefully prepared regional specialties. Guests fuel up with São Jorge cheese, locally-grown pineapple and bolo lêvedo, the popular saucer-sized sweet muffin drizzled with honey.

Active days wind down with cocktails on the rooftop lounge where the sunset puts on a spectacular display. Later, stroll to Ponta Delgada’s historic centre for a candlelit dinner at Alcides restaurant set within an atmospheric wine cellar or opt for an evening at the Casa do Bacalhau where entertainment includes Fado, the soulful Portuguese love ballads performed by singers accompanied by classical guitarists. 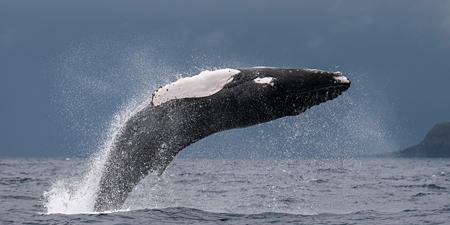 To immerse yourself in the natural wonders of the Azores coastline, begin with a morning of whale and dolphin watching. The Azores are one of the world’s largest whale sanctuaries and it’s possible to spot more than 20 different types of resident and migratory species, including the rare right whale and giant blue whale.

Then, head inland along winding roads flanked by hedges of hydrangea to the town of Furnas, a geo-site in the Furnas Valley, home to thermal springs and fumarolic fields with openings in the ground where sulphurous steams escape. It’s even possible to sip the mineral-rich waters from public drinking fountains within town.

Another nearby luxury hotel with hot springs is Furnas Boutique Hotel, a sister resort to the Azor Hotel in Ponta Delgada. Here, the healing waters emerge from their subterranean source at such fiery temperatures they must be cooled before being filtered into the modern outdoor and indoor swimming pools.

Other natural attractions on São Miguel include Lagoa das Sete Cidades, the largest freshwater lake in the Azores. Situated within a crater at the top of a dormant volcano on the island’s western point, legend say that these jewel-like blue and green lagoons were formed from the tears of an ill-fated pair of lovers. 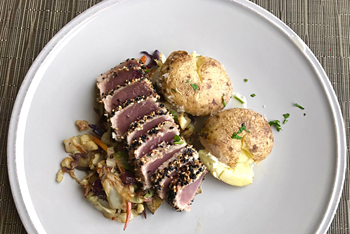 For guided canyoning adventure guaranteed to get your adrenaline pumping, head to the Parque Natural da Ribeira Dos Caldeiroes where you can rappel, jump and slide through a still-wild landscape. More leisurely options include walking a network of groomed paths flanked by waterfalls to the charming Visitors Centre set within a restored stone water mill.

Nearby is the Cha Porto Formoso tea plantation where tea fans will enjoy a guided tour through the entire process of making premium tea, from walking the fields to viewing 19th century processing machinery and sampling Pekoe, Orange Pekoe and Broken Leaf black teas. 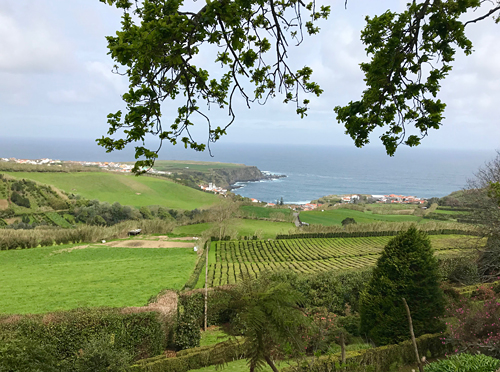 Nature lovers will also appreciate a day trip to stunning Lagoa do Fogo (Fogo Lake), the highest lake on São Miguel. This mirrored lake set within the caldera of a young volcano is poised 575 metres (1,886 feet) above sea level in the middle of the island. Hiking Fogo Lake’s well-marked trails is a scenic way to experience its beauty as the easy paths meander through fragrant forests of juniper, laurel and heather.

After hiking, cycling or other outdoor adventure in São Miguel’s mountainous interior, relaxation awaits at Caldeira Velha, a waterfall and hot springs on the northern slope of Fogo Volcano. Here you can soak in the iron-rich thermal waters of the Azores UNESCO Global Geopark, a protected area of volcanoes, calderas, lakes, lava fields, fumaroles and volcanic caves.

Whether it’s floating in a thermal pool or hiking through a cedar-scented forest, the island of São Miguel offers an unforgettable setting for a nature-inspired luxury getaway.

Getting There: The islands of the Azores are two hours from mainland Portugal. Azores Airlines (formerly SATA), offers flights to Ponta Delgada direct from Montreal from June to September in under 4.5 hours. Worthwhile is an upgrade to Executive Class service where you’ll enjoy fully reclining seats, fine-dining with Portuguese wines, airport lounge access and elevated service. www.azoresairlines.pt

Picos de Aventura: Whale-watching, hiking and dolphin excursions can be booked at the kiosk located in the marina.

Michele Peterson is an award-winning travel writer who specializes in food, drink and sun destinations. Her work has appeared in major magazines, guidebooks and travel anthologies. Ger recipes, travel tips and tour discounts on her A Taste for Travel blog or via Twitter/Instagram @atastefortravel