The McCord Stewart Museum is proud to announce that its planned new museum will be located in the heart of downtown Montreal. The new establishment will expand the McCord Museum’s current site by building on Victoria Street, which runs along the west side of the Museum, and the lot housing the former Caveau restaurant on President Kennedy Avenue. The combined area of these sites will enable the
museum to meet its needs for additional space and create an institution that will leave its mark on Montreal’s urban and cultural landscape.

Working closely with the City of Montreal, which is granting the right to build on Victoria Street, the Museum selected the site after conducting a feasibility study. The new building will house three recently merged museums—the McCord Museum, the Stewart Museum and the Fashion Museum—under a single roof. This legacy project will create a world-class institution for generations of Montrealers.

“Our administration believes that it is important to build this new museum. It will be a major attraction for our city and a source of pride for all Montrealers. We are pleased to be able to help advance the project by granting the right to use Victoria Street, so that this cultural space may continue to attract visitors, both locals and tourists, in the heart of the city’s downtown museum district,” declared Montreal Mayor Valérie Plante.

New museum to receive historic donation
The McCord Stewart Museum also announced that La Fondation Emmanuelle Gattuso had pledged to donate the extraordinary sum of $15 million towards the project. It is the largest single private monetary donation to a Quebec museum in over 30 years. In 1987, the J.W. McConnell Foundation donated $50 million to the McCord Museum for its expansion and the creation of an endowment to preserve its collection.

“Although I have lived in Toronto for many years, I am still a Montrealer at heart. This donation is in memory of my parents, Lina and Pasquale Gattuso, Montrealers of Italian origin who chose this city to raise their family and start a food business that still bears their name and has thrived across the country since 1936. It is my hope that this new museum will break ground very soon and that my donation will encourage the various levels of government, Montrealers and ex-Montrealers to mobilize for this magnificent project that will enrich
Montreal’s cultural life,” added Madam Gattuso.

A strategic location in the heart of Montreal 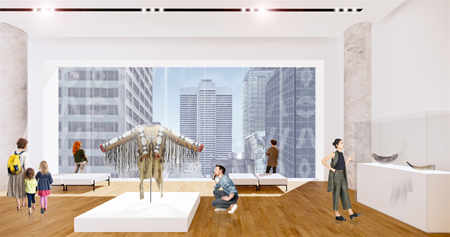 View of Place Ville Marie from a gallery

A symbol of local pride and a major tourist attraction, the new museum will be situated in the heart of the city that it will celebrate. In the centre of the Golden Square Mile, halfway between the Montreal Museum of Fine Arts and the Musée d’art contemporain, near the downtown universities, the McGill metro station, the upcoming electric train (REM) station and future Place McGill College, the site chosen meets the Museum’s desire for accessibility and openness. “We truly could not have found a better site and are very grateful to
the City of Montreal for its support and open-minded attitude,” noted Monique Jérôme-Forget, Chair of the McCord Stewart Museum Board of Trustees.

An architectural design competition will be launched for the approximately 300,000 square-foot project, which will preserve the Percy Nobbs heritage building and the west façade of the current McCord Museum.

A pressing need for space
For many years, the McCord Stewart Museum has been dealing with space issues that significantly affect its potential for growth and development, issues that have become even more pronounced since the 2017 merger with the Fashion Museum. For example, the limited size and number of its exhibition halls means the Museum is unable to display more than 1% of its collection. The lack of space is also felt in the storage areas, conservation facilities and crowded learning spaces, which limit the number of school groups that can be accommodated, despite growing demand.

The planned new museum will be able to accommodate twice the number of visitors and triple the number of students welcomed each year to its education spaces; it will also have enough space to store and expand its historical collections.

“The” museum of Montreal social history 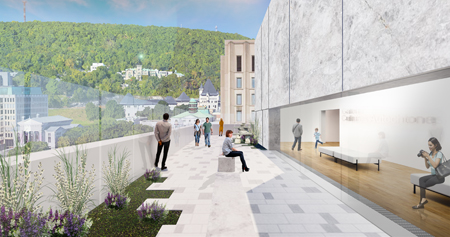 View of Mount Royal from an outdoor terrace

Founded with one of the largest historical collections in North America—over 1.5 million artefacts documenting the social history of Montreal from pre-colonial times to today—the new museum will be a participatory museum that reflects the cultural diversity, creativity and dynamism of Quebec’s largest city: a museum that is open, welcoming and inclusive, just like Montreal.

It will present Montreal’s contributions to the development of Quebec and Canada, highlighting the achievements, both past and present, of the city, its people and its communities. It will also be a forum for interaction and debate on major social and urban issues, community diversity, and various achievements that have shaped our history. It will be an essential reference on the Montreal of yesterday, today and tomorrow, and help enhance Montreal’s reputation as a world-class city.

“The extraordinary donation from La Fondation Emmanuelle Gattuso has confirmed, if any proof was needed, the relevance of this major project for Montreal. We want to give the city a major museum of social history, an inclusive and unifying museum, a museum open to the city and the world that celebrates the stories of all Montrealers, from Indigenous peoples to new immigrants. I would like to express my sincere appreciation to Madam Gattuso for her incredible generosity and for the vision and love she has shown our city,” concluded
Suzanne Sauvage, President and Chief Executive Officer of the McCord Stewart Museum.

About the McCord Museum
The McCord Museum is the museum of all Montrealers, a social history museum that celebrates life in Montreal, both past and present–its history, its people, and its communities. Open to the city and the world, the Museum produces exciting exhibitions and offers educational and cultural activities that engage visitors from Montreal, Canada and beyond by offering a contemporary perspective on history. It is home to over 1.5 million artefacts, comprising one of the largest historical collections in North America, organized into the following departments: Dress, Fashion and Textiles, Photography, Indigenous Cultures, Paintings, Prints and Drawings, Decorative Arts, and Textual Archives. McCord Museum: Our People, Our Stories.

About the Stewart Museum
The Stewart Museum, a private, non-profit history museum, was founded in 1955 by philanthropist David M. Stewart. The institution holds a unique collection of nearly 27,000 artefacts, archival documents and rare books that show the European presence in New France and North America up to the present. The Museum’s main mission: to conserve and exhibit these objects, which relate to the voyages, scientific advances, feats of arms, beliefs and daily life of our ancestors. This Montreal organization is located at Parc Jean-Drapeau in the arsenal of the British fortified depot on Île Sainte-Hélène, a 19th-century military construction registered in the Répertoire du patrimoine culturel du Québec.

About the Fashion Museum
After 34 years on Montreal’s South Shore, the Fashion Museum moved to the Bonsecours Market in Old Montreal in April 2013 and then merged with the McCord Museum in January 2018. As Quebec’s sole museum dedicated to fashion and textile arts, the Fashion Museum aimed to promote our rich clothing and textile heritage. The museum made a point of exhibiting creations from Quebec alongside international artefacts, in order to highlight the artists and artisans who have driven Quebec’s thriving fashion scene. The museum documented, preserved and showcased the history of fashion, a precious heritage for future generations. Its collection of over 7,000 garments, accessories and textiles is now part of the McCord Stewart Museum’s collection and enhances the fashion-based exhibitions produced by the institution.