“Montreal has a special place in my heart,” explained Sharon Hampson during a recent conversation. “I was playing in a small club on Crescent Street, and I was asked to sing on a record being made for children – which I happily did. Bram and Lois were also solo performers, and it happened that we all had music for children in our repertoires. The three of us were asked to work together on a Mariposa For Schools musical program, and we decided to record a one-off record for children. The rest – as they say – is history.”

That recording got the attention of CBC executives – who asked the trio to work on a television show. “Thanks to the power of CBC in Canada, we gained national prominence very quickly.”

Sharon. Lois & Bram would go on to make twenty recordings and sell over 3 million albums beginning with their iconic One Elephant, Deux Éléphants. Individually, the artists had their own social conscience; they were advocates for vaccinations and other children’s advocacy programs. “All three of us had the social action gene.” Sharon and Bram recently marked their 10th Anniversary of being involved with UNICEF.

As part of their year-long anniversary celebration, this concert marks the final opportunity for Montrealers to say good-bye and Skinnamarink with Sharon & Bram. “Many of us grew up with or raised our kids on Sharon, Lois & Bram’s music,” said Jeff Parry (whose Calgary-based company is co-presenting the Montreal date with Rubin Fogel Productions) “and we wanted to give all fans a chance to thank Sharon & Bram for the decades of music and concerts that have become an important part of our shared history.”

“When Lois passed away in 2015 – Bram and I thought that it might be the end… but we decided to carry on. We do this because we love performing – we love going to work every day.” Shasron continues; “After this tour, we’re going to continue to sing – but on recordings. We each have busy lives as parents and grandparents. We also have a book coming out in the Fall.” 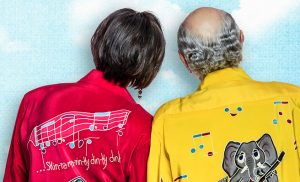 Sharon & Bram’s 40th Anniversary Farewell Tour is part of the duo’s Thank You for the Music initiative, meant to shine a light on the importance of coming together to sing – as families and as communities all across Canada – to embrace the values of togetherness, diversity and inclusiveness. The initiative includes the release of six new singles, including The Colour Song (released last November) and The Hug Song, which was released last week.

The last single will be a brand-new version of their beloved trademark song Skinnamarink with additional lyrics that will launch a national Canadian simultaneous sing-along. The duo also plans to publish a picture book of Skinnamarink through Tundra Books, an imprint of Penguin Random House.

Since 1978, Sharon Hampson and Bram Morrison have been pre-eminent in all aspects of family entertainment across North America as members of the trio Sharon, Lois & Bram. They have appeared in every major concert hall in Canada and many in the United States including Carnegie Hall and Lincoln Centre. They also performed at the White House in Washington. They have received numerous awards, including Gold and Platinum albums and JUNO awards for Best Children’s Album. To date, they have sold millions of albums worldwide and over 18 million people have viewed the Elephant Show Skinnamarink.

For their years of work providing the best in participatory music for children and their families, Sharon and Bram, along with Lois, have been inducted into The Order of Canada, the highest civilian honour in the country.