From Berlioz to a free outdoor symphonic presentation of the Bee Gees Saturday Night Fever, this immensely popular South Shore festival will fill three magical weekends from May 24th to June 16th

For me, it’s a sign that Spring has arrived when I visit my hometown of St. Lambert for a leisurely coffee and conversation with Marc Boucher, the Founder, Artistic and Executive  Director of Festival Classica. We talk about music, his career, my rock ‘n’ roll band, our kids, come back to music and even philosophize a bit about how music can sooth our souls. However, we spend most of our time talking about the terrific musicians and singers who perform at Festival Classica, many of whom return year-after-year because they enjoy the festival’s ambiance. Internationally renowned cellist Stéphane Tétreault has performed at every edition. Violinist Marc Djokic, pianist Jean-Philippe Sylvestre, Matt Herskowitz, singer Nathalie Choquette and even the Orchestre Métropolitain are all ‘regulars’. You’ll also have a chance to hear young classical and jazz musicians perform with their school ensembles. 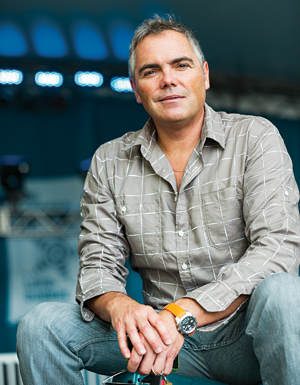 Opera singer Marc Boucher is the Founder, Artistic and
Executive Director of Festival Classica, now in its 9th season

Marc earns his living as an opera singer, and spends most of his winters performing in elegant concert halls throughout Europe.  He’s good at what he does, and his excellent reputation makes him a perennial favourite in Europe.

Marc has a good life in Saint-Lambert, and he made a decision in 2009 that he wanted to give something back to his community of St. Lambert. After a year of planning and establishing an organization, the first Festival Classica took to the streets and churches in St. Lambert in 2010. It’s been a success ever since, with last year’s attendance topping 65,000, and a projection of 80,000 for this year’s 9th festival – making it the largest classical music festival in Canada. “We’re doing the same thing with classical that the jazz festival has done with jazz, taking the music to a wider audience,” Marc states. Part of that process is to include music that appeals to a wider audience, such as previous years’ symphonic concerts featuring the music of The Rolling Stones, Queen and Offenbach; and having a rock band perform with the symphony. (The tribute to the Rolling Stones’ 50 year career will be repeated at St-Jean-sur-Richelieu on Saturday, June 8 at Parc Gerry Boulet.)

Another of Marc’s objectives is to introduce musicians and singers from the Greater Montreal Area to local audiences. His motivation may come from his own forced nomadic professional life. “I want to provide a good working opportunity for our own Canadian musicians – to give them a chance to play for eight to ten thousand people on a lovely summer afternoon or evening – to feel the energy of an audience that big!”

The festival has expanded to other south shore communities and also into Montreal, most notably to Town of Mount Royal and Westmount. “We worked closely with Mayor Cynthia Sharp to bring Handel’s Messiah last fall. We’re having a Festival Classica concert on June 11 at Our Lady of the Annunciation in TMR. We’re really happy that this will be our third year in TMR.”

The TMR concert will feature the Orchestre Métropolitain, conducted by Alain Trudel and featuring cellist Stéphane Tétreault and pianist Jean-Philippe Sylvestre.  The 90 minute program will pay tribute to the composers being celebrated in this 9th edition of Festival Classica, featuring works by Hector Berlioz, Jacques Offenbach and Albert Roussel, along with Quebec composer Jacques Hétu’s outstanding Piano Concerto No. 2! 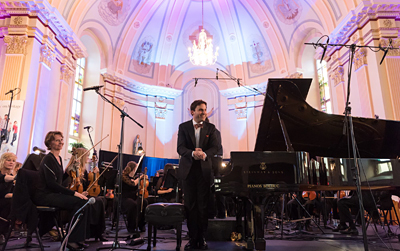 The festival opens at the historic
Basilique Sainte-Anne de Varennes

Marc’s objective is to make classical music accessible – to take it out of the formal concert halls and onto outdoor stages and into local churches. To encourage families to take in a classical music concert by keeping the programs to a maximum of 90 minutes, and to sell tickets for the indoor concerts at an affordable price; the most ‘expensive’ being just $32. Combo packages and family ticket packages reduce the rate even further. The Classica Passport provides access to 4 concerts for just $75. A Family Pass of just $185 gives a family of four admission to all the indoor concerts!  (For complete details, visit the bilingual website: www.festivalclassica.com)

There will be a mixture of 65 concerts this year; and here’s a sampling of the free outdoor and indoor ticketed concerts.

The festival opens on May 24th at the 325 year old historic and beautiful Basilique Sainte-Anne de Varennes at 30 De La Fabrique St., Varennes with the professional vocal ensemble Vox Luminosa. The program will be a vibrant tribute to one of Quebec’s greatest poets and songwriters, Gilles Vigneault. Accompanied by 15 musicians and hosted by Alain Dumas, Vox Luminosa evokes the career of this legendary creator in poetry and song. (In French)

On Saturday, June 1 at 8pm, cellist Stéphane Tétreault, violinist Marc Djokic and pianist Jean-Philippe Sylvestre  will perform as a trio at St. Lambert Catholic Church at 42 Lorne Ave, In his second commissioned recital in celebration of French music, Festival Classica’s favourite, cellist Stéphane Tétreault (who has performed at every edition of the Festival since its inception) will be joined by violinist and 2017-2018 Mécénat Musica Prix Goyer winner Marc Djokic  and renowned pianist Jean-Philippe Sylvestre. The program will feature works by Albert Roussel, Jacques Offenbach and Théodore Dubois. 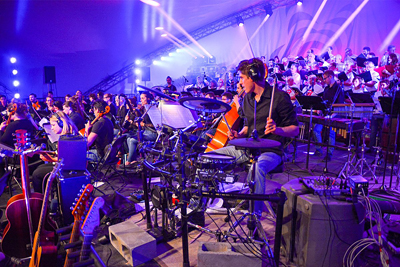 Saturday Night Fever: Saturday, June 1 at 9pm at the outdoor Scène Loto-Québec. The disco hits of the Bee Gees will anchor this 90 minute performance of memorable disco hits from the 80s. With the Orchestre symphonique du Conservatoire de la Montérégie (OSCM) and the Classica Choir under the direction of conductor Simon Fournier, it promises to be an energetic and memorable evening.

On Sunday, June 2 at 1pm at the Scène Loto-Québec, the Orchestre Philharmonic de Montreal will perform Symphonie Fantastique by Hector Berlioz. The first performance of Symphonie Fantastique in 1830 was an unprecedented event, as it introduced new concepts, including program music. This work by Berlioz is an epic and vividly imaginative portrait of despair, unrequited love and tormented dreams; it is music of quintessentially Romantic spirit. Under the direction of Louis Lavigueur. 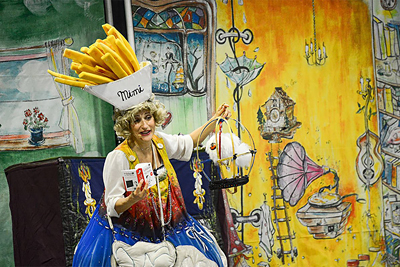 Nathalie Choquette will offer performances for adults and children

Also on June 2, at 4:30pm, you can enjoy tenor Marc Hervieux and five of his musical friends for an afternoon of good times, laughter and, of course, music. Marc and company will share lively stories and reminiscences, interspersed with emblematic songs. There will be something for (almost) everyone.

For a complete run-down of the 65 concerts, please visit the bilingual website:  www.festivalclassica.com. Tickets and passports can be purchased online of by telephone: 450-912-0868, ext 101. Single concert tickets are available at two IGA Louise Ménard locations in St. Lambert; 371 Victoria or 299 boul. Sir Wilfrid Laurier. Enjoy!