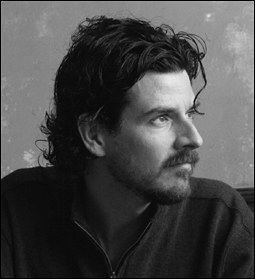 Scott MacLeod was born in Red Deer, Alberta, Canada, in 1965. His family moved to Montreal from Cape Breton N.S. in 1969, where he was educated in both French and English, fully integrating into the French culture of Quebec. MacLeod is a multimedia artist in the truest sense of the term. A critically acclaimed painter and photographer whose work is in many permanent collections, including that of the National Gallery of Canada, he is also a performing songwriter and recording artist. Scott has over 200 exhibitions and performances nationally and internationally and his art, music and film work has reflected social, political and historical themes with an aim to promote education and accessibility to art and culture. His work is in many museums, corporate and private collections. He has presented his work in Canada, The USA, Mexico, Ireland, Germany, Netherlands, France, Italy and Czech Republic. His work has been collected notably, by The National Gallery of Canada, Musée de Québec, Museo Nacional de la Estampa, Guinness Corporation, Air Canada, The Royal Bank of Canada, Pratt and Whitney, Reader’s Digest, Claridge, Brasserie McAuslan Brewing, London Life, CP Hotels, Loto Québec, ALDO, Senvest Collection, Dr. Jane Goodall and TV personality Rick Mercer.

Engaging his lifelong interest in history, with support from the National Film Board of Canada’s Filmmaker Assistance Program and a Main Film Grant, in 2009 MacLeod added filmmaker to his list of endeavors with the release of After the war with Hannelore – A Berliner War Child’s Testimony from 1945 to 1989. The 22-minute documentary had several high-profile screenings, including at Les Rendez-vous du cinéma québécois and Berlin’s Arnsenal 2 Institut für Film und Videokunst and One World Berlin Film Festival.

With funding from Conseil des arts et des lettres Québec, Canada Council for the Arts, and Aide au cinéma indépendant (ACIC) at the National Film Board of Canada, MacLeod has produced four short animated films—The Abenaki- People of the Dawn (2013), The Saga of Murdo MacLeod and his first contact with the Abenaki (2012), The Irishman – Child of the Gael (2014), and The French Canadian (2015)—that make up The Water of Life series. A collaboration between MacLeod and internationally celebrated storyteller and writer Mike Burns, these richly detailed and deeply moving untold histories of Canada tell the tales of personal struggle and survival by the Abenaki, Scottish, Irish and French. These four films have since been edited together as a feature animated film The Water of Life (2015), which was considered for Cannes 2016 and presented at the Holland Animation Film Festival Features Extra in Utrecht, The Netherlands and Les rendez-vous du cinéma québécois, Montreal, Quebec, Canada.

MacLeod’s current film project First Contact (2016) is about the first meeting between the Vikings and the Proto-Beothuk of Newfoundland.

Based in Montreal, MacLeod holds a BFA and MA from Concordia University. His thesis project was the documentary film Dans l’Griff-In Griffintown (2013), on the French community in Montreal’s Griffintown neighborhood, which won the 2014 Award of Excellence in Oral History from Concordia University’s Centre for Oral History. He is a member of RAAV, Main Film, a fellow at The Helene Wurlitzer Foundation of New Mexico and an affiliate at the Centre for Oral History and Digital Storytelling at Concordia University. He currently produces educational animations, films and web platforms with MacLeod Nine Productions as teaching tools for schools, libraries and the public.

“I have tried to define myself in my work through my personal “myth” or what Joseph Campbell refers to as “following one’s bliss” (Campbell, 1990 p. 211). This is a metaphor for pursuing one’s life path through the labyrinth, which for me has been a journey via my learning, art and teaching practices. This journey has given me courage to live, it has made me humble, it has fed and sheltered me, given me a voice and enabled me to do the same for other, through teaching, outreach and fund-raisers. As a result of this work, I have better understood humanity’s place on this planet and have tried to be a positive influence for political and social change.” http://www.macleod9.com/index.html 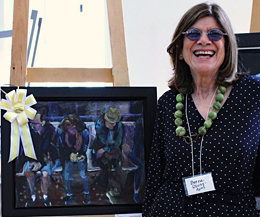 Tuesday, April 30, 2019
Artist/educator, Deena Dlusy-Apel
will speak about her work and the importance of social consciousness
from 1:30 to 2:30pm
at the Unitarian Church of Montreal, 5035 de Maisonneuve West.
Nonmembers $10. New members welcome – men also.
www.womensartsociety.com or  514-495-3701