There is such a wealth of ‘things to do’ in Toronto, that we recently realized that anytime is a good time to visit Canada’s largest and most diverse city. The city’s description as being Canada’s Downtown is an appropriate description. And unlike some other North American metropolis-sized cities, Toronto is kid-friendly – making it an ideal family destination.

We recently enjoyed a long weekend that combined business and leisure. Like the thousands of Montrealers who travel by air, train and car to Toronto for business purposes, we recently did the same and extended into the weekend. Our trip included a walking culinary tour with Culinary Adventures, a thoroughly entertaining performance of Come From Away, an enjoyable dinner in The Distillery District, and a visit to the Hockey Hall of Fame. We also took time to enjoy the pool at The Chelsea Hotel, our home base. 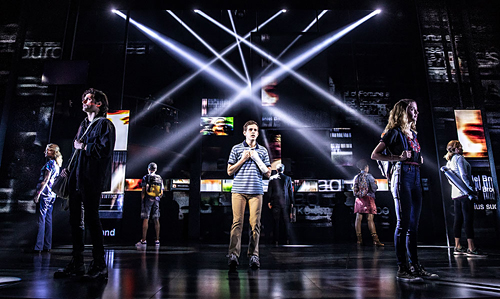 The theatre scene in Toronto is robust, and is ranked third in the world, just behind New York and London’s West End. Anchored by the Mirvish Group, there are enough productions playing simultaneously that you could easily plan a theatre-themed visit, seeing successive musicals and plays on consecutive evenings.

Come From Away is the blockbuster musical about how the good people of Gander, Newfoundland took in hundreds of complete strangers when dozens of planes were grounded following the 9/11 attacks in New York City. The musical continues its run on Broadway, and will soon be opening in London’s West End. The Toronto production has moved to the lovely and historic Elgin Theatre, with entrances on Yonge and Victoria Streets. The Elgin and Winter Garden Theatre Centre is a historic property that is owned and operated by the Ontario Heritage Trust – and they offer tours Monday evenings at 5pm and Saturday mornings at 10am for $12. These are elegant historic theatres that make a theatre night out a special event.

The Mirvish Theatre group have a reputation for presenting outstanding productions. Here’s a look at their productions for the next few months: Dear Evan Hansen at the Royal Alexandra Theatre until June 30; The Book of Mormon described at “the best musical of the century by The New York Times, at the Ed Mirvish Theatre from June 11 – 23; Tony Award winning Next To Normal from April 26 – May 9; Beautiful – The Carol King Musical at the Princess of Wales Theatre from April 9 – May 5; and A Doll’s House Part 2 from March 23 – April 14. Coming up this summer will be a return of the blockbuster Disney Presents The Lion King at The Princess of Wales Theatre from June 13 to August 4; Waitress at the Ed Mirvish Theatre from July 9 – August18; The Band’s Visit in September and October; Piaf/Dietrich at the CAA Theatre from September 17 – December 15; and perfect for the Holidays – CATS from November 27 – January 5. Hamilton is scheduled for an extended run beginning in February 2020. 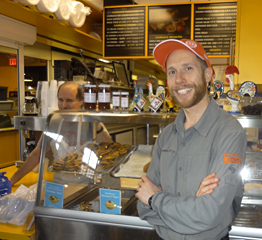 We took a Culinary Adventure Tour of the St Lawrence Market, complete with area history and many tastings from Market stalls. As recently as 2012, the market was rated by National Geographic as the best food market in the world! We started with a bracing coffee at Blazac, whose owner Dianna Oldstein captured the interest and investment of one of the dragons on Dragon’s Den; and she now has 14 locations in Greater Toronto. You’ll also learn the fascinating history of the Flat Iron Building, St. Lawrence Hall, Catherine Church of St. James and other historic landmarks – all with some interesting and often quirky personal anecdotes.

After an outdoor tour of the historic part of Toronto, we moved indoor into the vast St. Lawrence Market. The Market itself is a reflection of Toronto’s history, where the original Town Hall has been included in the current building. Our guide Leo Moncel gave us the history of the market, and many of the food stalls that have been passed down from generation to generation. “Many of the owners know their customers who have been buying at the market for 10, 15 and more years; becoming friends. Ponesse Foods has specialized in fruit since 1903. Owner Mario started working at the stand when he was 9 years old, and he purchased the business in 1985, but kept the original owner’s name. 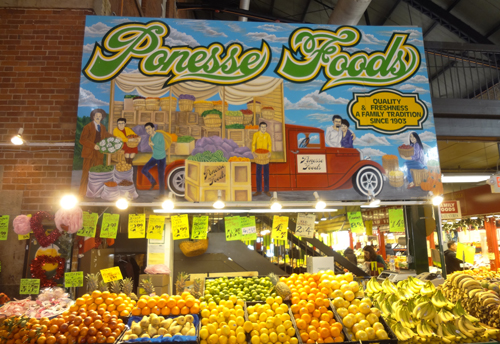 Ponesse Foods, in business since 1903 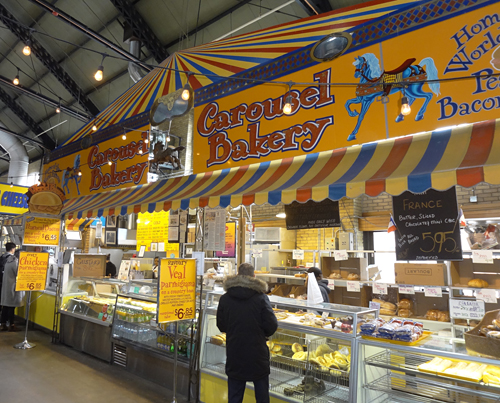 We enjoyed pea meal bacon sandwiches at the Carousel Bakery

Unique products like kangaroo, camel or crocodile steaks may tempt you. And if after seeing Come From Away puts you in the mood for Cod Tongues from Newfoundland, visit Mike’s Fish counter. While you’re there ask for a taste of the manager’s special smoked salmon and gravlax.

The Culinary Adventure Tour Company offers a wide variety of private and group tours and neighbourhood explorations. We were tempted by the King & Queen West Brunch Tour, and the Chinatown & Kensington Market Tour would be great in warm weather. Next time!

Culinary Adventure Company operates in Toronto, Kingston, Ottawa, Halifax and Charlottetown.  The tours are a great way to learn about a neighbourhood, it’s people and history; all the while sampling interesting cuisine. Visit their web site: www.culinaryadventureco.com, or call 1-416-565-1730 or 1-877-317-4870

The Distillery District has become immensely popular with residents and visitors to Toronto. Dating back to the 19th Century, the buildings made up the Gooderham Worts Distillery, the largest distillery in the world. It now houses fine restaurant and interesting artisanal shops.  We had a terrific dinner at Archeo, a restaurant with exposed brick walls, timbered ceilings and most importantly, delicious food. Everything  about our evening was outstanding. The restaurant is a member of the “100 km Club”, which means that all of their food is sourced within a 100 km radius. Pasta and Panini bread are made in-house; and they’re delicious! The Tiramisu My Way for dessert was an adventure in chocolate and the traditional Tiramisu ingredients with a unique presentation, worthy of the name ‘My Way’. 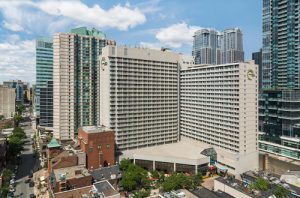 The Chelsea Hotel has been completely renovated

Our home base for this trip was the well-located and family-friendly Chelsea Hotel. With 1,590 rooms, it is the largest hotel in Canada. The two Club floors are for adults only, and offer a comfortable EICLUB Lounge, breakfast buffet, evening appetizers and bar service from 5 – 8pm. There is also an adult pool & exercise room.

For families, children have their own Check-in, complete with a Treasure Chest of toys. A family friendly pool has a water slide close beside a playroom with live bunnies, and an arcade & games room for the teenage set. 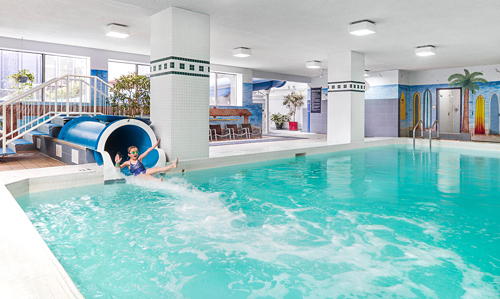 The Chelsea has an ideal location on Bay Street, with a second entrance on Yonge Street, two blocks from the Eaton Center and Dundas Square – our Canadian version of Times Square in New York, where there is always something happening.  The Hotel is in easy walking distance to the Theatre District, and a short cab ride ($10.00 fare) to Harbourfront attractions & sports centers, or to the Distillery District, known for its unique shops and variety of restaurants.

The Chelsea has a program whereby you can show your room key and get discounted entry to the spectacular Ripley’s Aquarium, The Royal Ontario Museum, the Science Centre and other Attraction Partners listed at the hotel. 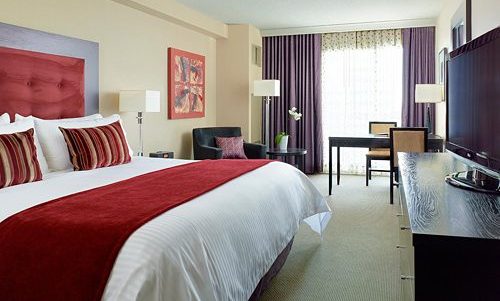 The Chelsea staff is dedicated to giving back to the community. In six years, they have raised $600,000 for the Sick Kids’ Hospital. Management is committed to accessible tourism, and offer Braille menus, autism kits for guests, strobe warnings for hearing impaired guests and a range of services to ensure that guests with disabilities are comfortable. Says PR Director Tracy Ford; “Regardless of your disability, we want you to have a really great visit.”

As we said at the beginning, “Anytime is a good time to visit Toronto – Canada’s Downtown”.