People participating in the Défi Canderel for the past 30 years have raised more than $16,000,000 for cancer research, shared equally between McGill University and Université de Montreal – all without strings attached. The research departments are able to determine which way to best use the funds. This year will mark the 30th Anniversary of the event founded by Jonathan and Susan Wener, and the expectations are high to raise $2,000,000 for this year’s run on Thursday, May 9. 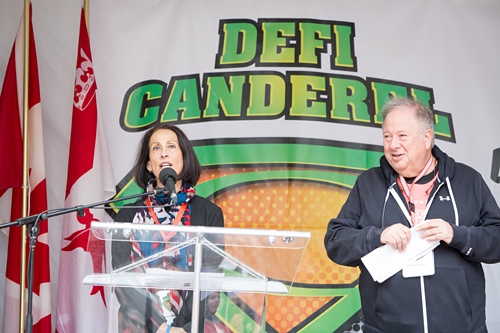 For the past 30 years, a group of Montrealers have donned brightly coloured t-shirts and taken an easy run from the McGill Roddick Gates through the downtown core and returned to the McGill campus for the end of the race. The Défi Canderel run is immensely popular with participants because it’s fun, an opportunity for company team-building, and above all – participants feel good about making a positive difference.   In 2005 the run was awarded the Canadian Imperial Bank of Commerce “Spirit of Leadership Community Award” for its longevity and success.

In 1989 the Wener family’s world was rocked to the core when Susan Wener was diagnosed with colon cancer, and underwent treatment for the disease. Jonathan Wener, Founder and President of Canderel, one of Canada’s leading real estate development companies asked the doctors treating his wife if there was anything he could do, a machine he could purchase – anything to help Susan. “I was hoping that there was a piece of equipment we could buy, or something we could easily get… a quick fix, because men like to repair things as quickly as possible.”

The doctors’ response was that funding for research was vitally important – and so Jonathan Wener the developer became a fund raiser, and established Défi Canderel, a mid-day run in downtown Montreal.  Since its inception the run has raised more than $16,000,000 for cancer research, including $1,500,000 in 2018.

“Cancer is a disease that touches us all.  By working together and engaging the community, collectively we have the ability to make a difference in the lives of our friends, family, neighbours and co-workers.”

The funds are divided equally between the Goodman Cancer Research Centre at McGill and the Montreal Cancer Institute at Université de Montréal. The annual donations are somewhat unique; in that there are no strings attached to the funds. Executive Director Louise Lafleur states; “Right from the beginning, Jonathan and Susan believed that the researchers would be in the best position to allocate the funds for their ongoing research projects.”

Participants are organized in teams, usually on a corporate basis. The entry-level amount for a team to participate in the run is $4,000, with escalating levels at $5,000 for Bronze; $7,500 for Silver and $10,000 for Gold level participation. Team members often make additional individual contributions, raised from family and friends.

“I wanna run cancer out of town!!”

“We meet for registration and t-shirts starting at 11 am on the lawns at the McGill Campus, just inside the Roddick Gates at Sherbrooke and McGill College,” states Louise. “We have welcoming remarks at 12:15, followed by a warm up led by the McGill Athletic Department. At 12:45 we walk down McGill College to de Maisonnueve, where we begin to run.” The 2.5 km course goes west to Mackay St., down to Ste-Catherine and east to Peel and then back up to Sherbrooke. As participants cross de Maisonneuve, they begin a cool down walk going up to Sherbrooke and west back to the Roddick Gates at McGill. “We have a light lunch served by Java U, and loot bags from Parasuco, and of course, everyone receives a Défi Canderel SUPERHERO T-shirt. It’s a fun event!”

There is still plenty of time to form a team of friends or colleagues for this year’s milestone event. For more information about how to participate in the 30th edition of Défi Canderel, please call Executive Director Louise Lafleur: 514-261-7245 or visit: www.deficanderel.com. Enjoy!