The Segal Centre for Performing Arts is proud to present the Montreal premiere of Old Stock: A Refugee Love Story co-produced by 2b theatre company and the National Arts Centre. Co-created by Hannah Moscovitch, Ben Caplan, and Christian Barry, and starring musician Ben Caplan, this international cult hit is inspired by the real-life love story of Moscovitch’s great-grandparents immigration to Canada. 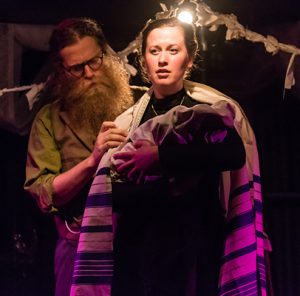 A Raw, Unexpected, and Bewitching Production
Old Stock: A Refugee Love Story is a humourously dark folk tale woven together with a high-energy concert. This sumptuous Klezmer/folk music/theatre hybrid is based on the true stories of two Jewish Romanian refugees coming to Canada in 1908. After losing everything, Chaim and Chaya have been given a second chance in the New World. It’s about how to love and find our shared humanity after facing the horrors of war.

Having premiered to great success in Halifax, Old Stock: A Refugee Love Story has won numerous accolades around the world. In addition to its cross-Canadian tour, this one-of-a-kind production garnered awards and recognition when it played at the prestigious Edinburgh Festival Fringe and in New York. It is currently on a multi-stop tour across the U.K. and the Netherlands before heading to Australia and California next spring.

“What I love about this show is that it’s completely unique. This historical love story paired with the inventiveness and musicality of Ben Caplan is a match made in heaven. The Studio will be bursting at the seams with grandiose, larger-than-life Klezmer energy,” said Lisa Rubin, Artistic and Executive Director of the Segal Centre.

Phenomenal Husband and Wife Team Lead the Cast and Creative Team
Hailed as “Canada’s Hottest Young Playwright” by The National Post, The Globe and Mail, and Now Magazine, Hannah Moscovitch has written East of Eden, Other People’s Children, This Is War, What a Young Wife Ought to Know. She has won many awards, including the prestigious international Windham-Campbell Prize administered by the Beinecke Library at Yale University and the Trillium Book Award-winner (she is the only playwright to win in the award’s thirty-year history). Her husband, Christian Barry, wears many hats in this production including Director, Co-Set/Lighting/Sound Designer, as well as co-writing the songs. He is an award-winning director, dramaturge, actor, writer, and designer from Halifax, and a founding member and artistic co-director of 2b theatre company. Ben Caplan pulls double duty as co-songwriter and as the play’s narrator, The Wanderer. Though best known as a songwriter, his first experiences as a performer were in the theatre. This production marks his first return to the theatre after a ten-year hiatus.

SUNDAY @ THE SEGAL
An enriching pre-show lecture on the ideas and themes of Old Stock: A Refugee Love Story.
Sunday, December 9 – 11:00 a.m.
Entrance is free.

MONDAY NIGHT TALKBACKS
A chance to interact with the creators and actors of the play after the curtain goes down.
Mondays, December 10 and 17

TUESDAY NIGHT LIVE – NEW!
One of the coolest nights at the theatre for patrons 21 to 45. This social evening out includes dinner, drinks, and a discounted ticket to see Old Stock: A Refugee Love Story.
Tuesday, December 4