In a few weeks, The Harry Potter Film Concert Series will return to Place des Arts with the fourth film, Harry Potter and the Goblet of Fire in Concert. On November 30 and December 1, a live symphony orchestra will perform every note from Patrick Doyle’s original score while the film plays in high-definition on a 40-foot screen. 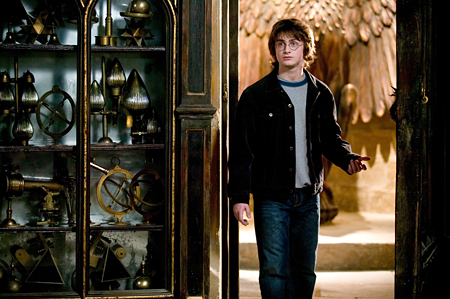 For the past two and a half years, audiences have revisited their favourite child wizard from J.K. Rowling’s popular young adult book series at Place des Arts, where each of the eight films in the series is being revisited on the big screen. “The music in the Harry Potter movies has, without a doubt, defined the sound of magic for generations,” says Andrea Warren, of Attila Glatz Concert Productions, the company presenting this film with orchestra series in Montreal. “Multi-generations come to these live concert events dressed in their house colours, cheering for the characters they love on screen! It’s really an interactive experience.”

For anyone who hasn’t read these books or seen the movies yet, in the fourth installment of the story, Harry Potter is mysteriously entered into the Triwizard Tournament, a grueling contest among three wizarding schools in which contestants confront a dragon, water demons, and an enchanted maze. “From a plot point of view, this is the first moment we see real maturity in Harry, Hermione, and Ron,” Warren notes. “Harry is approaching adulthood, and his evolving character is really reflected in the music behind him. Definitely more somber and complex.” Winning both the International Film Music Critics AWARD (IFMCA) and ASCAP Film and Television Music Award for the score, the music composed by Patrick Doyle (Braveheart, Hamlet, Sense and Sensibility) brought fresh emotional gravitas to the film series.

Glatz Concerts presents many of these films with live orchestra, not only in Montreal, but across Canada and the US. I spoke with Warren to learn why this kind of performance is such a fan favourite: “Experiencing a movie in a theatre, you laugh harder and feel the film more deeply because you’re in the company of others. The same is true of a night out at the symphony. This collective experience is at the heart of what we want to deliver: an immersive experience that attracts not only movie fans, but also introduces new audiences to a classical orchestra.” The company has presented Gladiator, Godfather, and Amadeus live with orchestra in Montréal, and coming up next year they’re bringing Jurassic Park (March 29 and 30) and of course, the next installment of the Harry Potter series.

Tickets for these concerts are nearly gone (Placedesarts.com/ 514-842-2112). Don’t forget to check back on November 30 when tickets for Harry Potter and the Order of the Phoenix In Concert will be released.