The MAC is hosting the largest-ever solo show in Canada or the United States by Montreal-based and internationally-acclaimed artist Rafael Lozano-Hemmer.

Unstable Presence is a major survey of Lozano-Hemmer’s work over the past 18 years, bringing together 21 pieces, including several large-scale immersive installations. In his work, Lozano-Hemmer draws on science, technology, politics, sociology, poetry, music and art history, nourishing a rich conversation with the public.

Until September 9, 2018, the MAC invites visitors to an unusual and unique museum experience in which they are encouraged to interact with the exhibition, becoming a part of the artworks.

RAFAEL LOZANO-HEMMER: UNSTABLE PRESENCE
Born in Mexico and proud Montrealer, Rafael Lozano-Hemmer is a leading international figure in participatory and digital-media practices. He is highly visible on the world stage, where his work is regularly shown in the most prestigious institutions. During the 1990s, he began exploring the performative potential of interaction and, in particular, the integration of various artistic disciplines through technology, which he describes as “the language of our time”, the use of which has become “inevitable”. 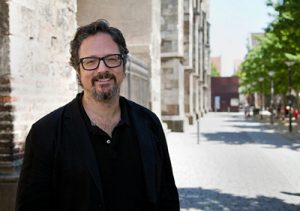 The participatory and technological aspects of Lozano-Hemmer’s work are imbued with the notion of co-presence, where live and recorded data overlap. Through the use of microphones, face-recognition algorithms, biometric scanners and computerized surveillance, artworks interact with the visitors in performances that are sometimes both playful and intimate. However, the technology that underlies the interaction often echoes more troubling social, economic and political dynamics.

Showing how we interact with technology and making the internal mechanisms of devices visible is one of the strategies deployed in Lozano-Hemmer’s works. As you walk through the exhibition, the physical presence of the works and their sculptural occupation of space, provide an important counterweight to the argument of digital “dematerialization.”

“Each visitor’s engagement with the technology gives them a key role in the construction of the experience, but also reminds them that the device is part of a much bigger social system in which technology, economics and politics are intertwined in complex and often problematic ways.”
– Lesley Johnstone and François LeTourneux, co-curators of the exhibition, MAC