The Queens of Egypt, a wonderful immersive exhibit, is making its North American premiere at Pointe-à-Callière. Running until November 4, 2018, the exhibit’s over 350 artifacts shine a light on the lives of the royal women of the New Kingdom period (1539 -1076 BC).

Though a patriarchal society, women in ancient Egypt had more legal rights, political and religious power than the woman of classical antiquity. Through the displays of stone statues, pottery, tools and jewelry we are introduced to several Queens of Egypt: Ahmose-Nefertari, Hatshepsut (who also ruled as pharaoh for almost 22 years), Tiye, Nefertiti, Tuya, Isetnofret and Nefertari.

“Throughout history, women’s stories have so often been obscured, but these Egyptian women of power played an important role in society. I hope that the tribute we pay to the queens of Egypt in this exhibition, and the exceptional quality of the objects presented, will remind visitors of how instrumental this society’s contributions were. Ancient Egypt gave us ingenious irrigation canals; master artisans; incredible architecture in their temples, palaces, and villages; elegance in body care; and strong, intelligent women of power who had a great appreciation for beauty and meaning. We have so much to learn from their immense legacy,” notes Pointe-à-Callière’s executive director, France Lelièvre. 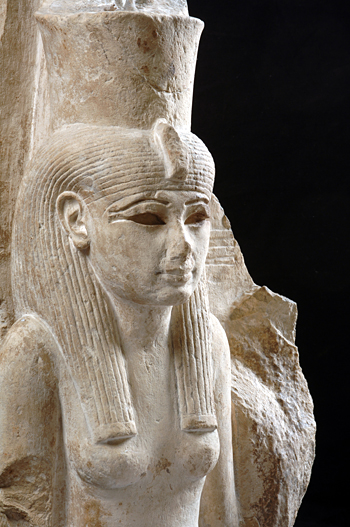 The exhibit begins with a limestone bust of the goddess Mut. This statue, like a good portion of the pieces on exhibit, is on loan from the vast Egyptology collection at the Museo Egizio in Turin, Italy. Here, on the first floor of the exhibit, we experience the east bank of the Nile in the Thebes region (near Karnak and Luxor). The first area features four large seated stone statues of the fearsome female-bodied lion-headed goddess Sekhmet. In the same room sits another female, feline goddess – a small bronze statue of a cat, Bastet was a benevolent protector of the household, women and children. In both human and animal form, female goddess of fertility, motherhood and rebirth are seen throughout the exhibit.

Under the gaze of beauty icon Nefertiti, or at least a bust of her, tables display many Egyptian beautifying items. Bronze mirrors, carved wooden boxes that would have contained blushes and powders, alabaster cream jars, kohl eyeliner vessels and perfume bottles. A scent table allows visitors to partake in the aromas of the common ingredients used in ancient perfumes: frankincense, jasmine, cinnamon, mint, pine, and myrrh. Necklaces, rings, earrings, combs, hair pins and pendants / amulets made of bronze, gold, jade, glass, lapis lazuli and carnelian brightly adorned the linen clothing that the Egyptians wore. Interestingly, the ubiquitous black eyeliner that adorned both male and female Egyptians not only provided an aesthetic appeal, the kohl also offered antibacterial properties, thus protecting against eye infections. 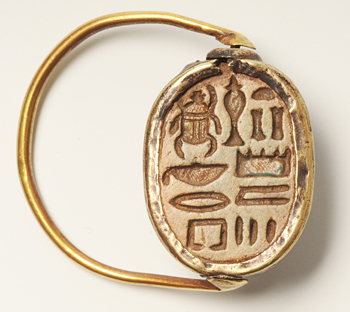 The second floor of the exhibit represents the west bank of the Nile, where the tomb filled Valley of Queens is located. This side of the Nile is also home to Deir el-Medina, the village where craftsmen and their families lived while working on the tombs. The village area of the exhibit is particularly insightful, giving us a rare look into the lives of non-royal ancient Egyptians. Ostraca, pieces of limestone featuring preparatory sketches, show us the practiced skills apprentices needed to master before creating tomb wall imagery. These ostraca, some quite rudimentary, and a paint brush still bearing remnants of Egyptian blue are an unexpected highlight of the exhibit.

Courtesy of Ubisoft’s Assassin’s Creed Origins, street scenes of daily Egyptian life are projected on the walls, and a short audio visual presentation gives visitors an introductory lesson on hieroglyphics. This “writing of the gods” could be written in three directions: left to right, right to left, or top to bottom, but never from the bottom up.

In the final section one can peruse a long papyrus excerpt from The Book of the Dead, listing some of the 175 elaborate spells used to help achieve eternal life and the “weighing of the heart” used by the god Osiris to determine if the deceased had led a virtuous life. Take the time to properly review the stelae, decorated vertical stone slabs with rounded tops, which usually depict the deceased offering gifts to the gods. You will notice at least two of the pieces show multiple ears alongside the god, an easily read hieroglyphic meaning that the god hears their prayers.

Another Ubisoft screen explains the basics of mummification, a 70 day plus process that involved removing organs (some saved in canopic jars, others disposed of), drying out the body and performing religious rituals. Amongst the several highly decorated sarcophagi are a couple displayed so as to show the adornments were not only on the outside but inside the sarcophagus as well.

The exhibit culminates with a scene from Nefertari’s tomb. The favourite wife of Ramasses II, Nefertari’s final resting place was discovered by Ernesto Schiaparelli, former director of Turin’s Museo Egizio, in 1904. Though plundered in antiquity the tomb still held a few archeological treasures, including lovely frescoes on the walls and broken pieces of her thick granite outer coffin lid. Before passing by the reproduced frescoes, make sure not to miss her nearly 3500 year old palm leaf sandals!