Festival favourite, Howie Mandel, is returning for the fourth time to host the prestigious CW gala with a lineup of top comedic superstars at the Just For Laughs festival. Rising to any occasion for over 30 years in the business, Mandel continues to push the creative boundaries of the entertainment industry. 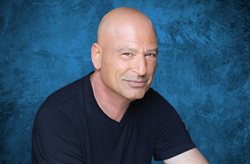 Howie Mandel started his career on a dare in Toronto in 1979 and has remained a constant force in show business for over 30 years. Mandel has been active in the comedy scene as executive producer through his production company ALEVY Productions, which has produced the series Take It All and Howie Do It for NBC, Deal With It for TBS, and Mobbed for FOX, among others. He currently serves as a judge on NBC’s hit summer talent competition series, America’s Got Talent, now in its 12th season with this being Mandel’s eighth season on the series.

Mandel’s versatile career has encompassed virtually all aspects of the entertainment spectrum, including television, film and stage. In 2009, Howie added another title to his resume, author, when he released his frank, funny, no-holds- barred memoir Here’s the Deal: Don’t Touch Me. The memoir that revealed his ongoing struggle with OCD and ADHD–and how it has shaped his life and career made the New York Times Bestseller list on its first week and remained on the list for several consecutive weeks.

Originally from Boston, Gary Gulman has been a scholarship college football player, an accountant, and a high school teacher. Now he is one of the most popular touring comics and one of only a handful of comedians to perform on every single late-night talk show. Gary marked his 20-year anniversary in stand-up with the It’s About Time Tour, selling out theaters throughout the country. It’s no wonder the New York Times wrote, “Gary is finally being recognized as one of the country’s strongest comedians.” Gary’s TV credits include Last Comic Standing, Inside Amy Schumer, and currently on HBO’s Crashing and HBO’s new series 2 Dope Queens. His 3 stand-up specials are streaming now on Netflix and Amazon.

Maz Jobrani can currently be seen starring in the CBS sitcom Superior Donuts, opposite Jermaine Fowler, David Koechner, Katey Sagal, and Judd Hirsch. Maz’s first original Netflix standup special Immigrant was filmed at the Kennedy Center and is currently available for streaming. He has also put out 3 other solo specials on Showtime including: Brown and Friendly, I Come in Peace, and I’m Not a Terrorist, But I’ve Played One on TV. In the spring of 2016, he performed at the White House where he had the privilege of introducing Michelle Obama. He was a founding member of The Axis of Evil Comedy Tour, which aired on Comedy Central in 2007. Maz starred as the title character in the award-winning indie comedy, Jimmy Vestvood: Amerikan Hero, a film which he co-wrote and co-produced and is now available on all major outlets online. He has co-starred in many films including Disney’s, Descendants, Sydney Pollack’s The Interpreter, and Ice Cube’s Friday After Next. With over 50 guest star appearances, Maz can regularly be seen on television’s most popular shows. Guest stars include Grey’s Anatomy, Curb Your Enthusiasm, True Blood, and Shameless. He is a regular panelist on NPR’s Wait Wait Don’t Tell Me and has given 2 TED Talks. His LA Times Best Selling Book, I’m not a terrorist But I’ve Played One on TV, was published by Simon & Schuster. Maz executive produced Everything Must Change, a documentary about his sister’s battle with breast cancer which is currently available on iTunes.

With an uncanny knack for taking serious topics (racism, rape culture, sexism, police brutality, etc.) and with humor, making them relatable and interesting, she combines intellectual wit, irreverent silliness and a pop culture obsession to create her unique style of smart funny content for the stage and screens.

Along with performing stand up across the globe and touring colleges doing comedic lectures on everything from sexism and diversity to relationships and black popular culture, this former MTV VJ with a master’s in African American studies from Columbia University is a series regular as “Tiffany” on HBO’s Insecure, named by Time Out LA as one of 2017’s comedians to watch, is creator/host of LA’s hit comedy game show, Smart Funny & Black at Nerdmelt, speaks truth to change via her wildly popular Instagram and monthly column “Amandaland” at InStyle Mag, has written/produced/starred in two seasons of her scripted comedy, Get Your Life, available on www.Blavity.com and went viral after articulately and passionately confronting Caitlin Jenner on issues of race and equality in America, during a live streamed dinner, hosted by Katy Perry, on Youtube.

Huffington Post recently named her one of six influencers, including Ryan Coogler, who highlight the power of black representation in entertainment today. In June 2017, Amanda was named one of ESSENCE‘s Future 15, a list which spotlights tomorrow’s greatest Black millennial influencers.

Melissa Villaseñor is a featured cast member on the 42nd season of Saturday Night Live. Born and raised in Whittier, CA, Melissa began impressions at the age of 12 which led her to the Laugh Factory comedy camp and then stand-up open mics and shows all over the county.

She made her television debut on America’s Got Talent and does extensive voiceover acting on Fox’s Family Guy, Cartoon Network’s Adventure Time, and Comedy Central’s Triptank. Last year Melissa opened for Whitney Cummings on her national tour and at the taping of her HBO special.

Melissa has been featured on Broadway Video’s Latino-focused digital platform, “Mas Mejor,” which distributes existing and new comedic content targeted to the Latino population as well as general audiences.

In 2015 Roy Wood Jr., became part of “The Best F#@ing News Team” as a correspondent on Comedy Central’s The Daily Show with Trevor Noah. In addition, in 2017 he was named the new host of Comedy Central’s storytelling series, This is Not Happening. The fourth season of which premiered February 2nd.

Entertainment Weekly described the thought-provoking comedy of Roy Wood Jr. as “Charismatic Crankiness.” His comedy has entertained millions across stage, television and radio. Prior to The Daily Show, Wood co-starred for two seasons on TBS’ Sullivan & Son, playing the loving drinking buddy of star Steve Byrne, who has returned to Pittsburgh to run the family bar.

In 2017, Roy Wood Jr.’s first one hour standup special, Father Figure, premiered on Comedy Central along with an extended uncensored album of the same name released by Comedy Central Records.

Three-time Emmy nominated Writer, director, producer, and standup comedian Neal Brennan has become a force in the comedy world. An across-the-board talent, Neal has found success in almost every creative vein in the comedy community. He has collaborated with the top writers and talent in the business and worked on several popular shows in various capacities. If there is a comedy that audiences are responding to, Neal is often somewhere to be found.

Neal’s critically acclaimed stand-up special 3 Mics premiered on Netflix in 2017, with Paste Magazine offering “It will floor you in the best way possible.” In a break from traditional standup comedy, 3 Mics sees Brennan alternating between three separate microphones; one for traditional stand-up, one for one-liners, and one for short confessional monologues covering everything from managing his depression to his difficult relationship with his father. The show enjoyed a successful off-Broadway run in NYC with superstar musician John Legend serving as Producer.

Lil Rel Howery stars in LionsGate’s Uncle Drew, in theaters now, as the lead opposite Kyrie Irving. Throughout the rest of this year, Lil Rel is concurrently working on several projects: he is executive producing, writing, and starring in FOX’s upcoming comedy series, Rel, premiering in September; he will appear in The Comedy Central Roast of Bruce Willis; he recently wrapped Lucky Larry a.k.a. Bad Trip, in which he is starring opposite Eric Andre for MGM; Bird Box opposite Sandra Bullock for Netflix; and Brittany Runs a Marathon opposite Jillian Bell. Previous to this, he was seen in Jordan Peele’s hit movie, Get Out, in his break out role as “Rod the TSA agent.” He also starred as Jerrod Carmichael’s brother, “Bobby Carmichael,” in NBC’s comedy series The Carmichael Show (2014-2017); and can be seen as “Quentin” on HBO’s Insecure with Issa Rae. Howery’s stand-up special, RELevant, premiered on Comedy Central and was executive produced by Kevin Hart. The telecast was named one of the 10 best standup specials of 2015 by Vulture.com and has become a favorite of fans and comedy heavyweights.

Her Seeso special, 45 Jokes About My Dead Dad, made Vulture’s Top Ten Comedy Specials of 2016, as well as Paste, Splitsider, Interrobang, and The Decider. The New York Times pointed to, “sharply written one-liners captured the pain and frustration of caring for a dying loved one.” Paste Magazine called it “hilarious… brutal, and cathartic” and Interrobang called it “innovative… twisted and dark.”

Before joining the writing staff at Conan (2009 to present), Laurie was a staff writer on The Late Late Show with Craig Ferguson, Too Late with Adam Carolla, and Tough Crowd with Colin Quinn. In 2012, Laurie wrote the New York Times bestseller Sh*tty Mom, a parenting book that Time Magazine called “criminally funny.”

Laurie has performed at the Edinburgh, Bridgetown and Moontower comedy festivals. She’s also done shows for the troops in Iraq, Qatar, Kuwait, and Diego Garcia. Her podcast with comedian Jackie Kashian, The Jackie and Laurie Show, is big with young comedians and middle aged men.

The 36th edition of the Just For Laughs Festival promises to be the most star-studded lineup ever with TV and cinema’s biggest comedy names, top touring comedians, cult-favourites and up-and-comers all converging on Montreal this summer. Galas, street performers, theatrical productions and stand-up shows in indoor venues and in the streets. Guaranteed to keep audiences in stitches.