The MUHC Foundation is charged with the enormous responsibility of raising tens of $millions to help fund research in the world-class hospitals that make up the McGill University Health Centre, from the Montreal General to the gleaming new Glen Campus, arguable one of the best hospitals in the world. In her capacity as President of the Foundation, Julie Quenneville is responsible for leading her team in the constant efforts to raise the research funds needed.

Julie’s parents created a loving home for their three children, living in several West Island Communities. “My Dad was an electrician and my Mom was a radiology technician. My parents encouraged us to do well in school, and to go to University. My brother in an Engineer and my sister is a Physician. I was a straight A student, a bit of a dreamer. I participated in a lot of activities; if there was something going on – I’d sign up. I played a lot of basketball, was in the Debating Club, Theatre Club, Dance Class  and by Grade 6, I was our class President. It was easy to do all this, because I attended a small school in Ste-Anne-de-Bellevue, and the teachers and students all knew each other.”

“I began to volunteer at the West Island YMCA when I was 13, helping other kids who were less fortunate, who didn’t have a good family like I did.”

Julie transferred to the much larger Polyvalente de Sources, where she found a wider range of economic backgrounds in the student population. Classmates came from poorer and also wealthier families. “In high school, I had my first experience with gangs, and students who were already into prostitution. You don’t forget that.”

“I wanted to be a foreign correspondent, and decided that as a prelude to Journalism school, I’d go to John Abbot CEGEP, which was my first experience of going to school in English. It was hard, really hard…my English wasn’t nearly as good as I thought it was.”

Julie prevailed and was accepted into McGill Political Science. After her first year, she transferred to Concordia Journalism, and carried a double Major in Journalism and Political Science. “I loved school – everything about it. Every day I met so many interesting people. My last internship was at CBC, I was so happy that I cried.” That elation was short-lived when CBC implemented sweeping staff cutbacks. Julie did some overnight news anchoring on CJAD, but found it too difficult to work overnight and then attend class.

Julie worked on-air at Videotron and then worked at the West Island Chronicle. “The reasons for going into journalism were still there, and The Chronicle made sense for me.” At this time, politics and journalism would start to mix. “My mother and grandmother were very active politically, volunteering for political campaigns. My grandmother especially pushed us to get involved, volunteering for the Liberal candidates. I worked on Russell Williams’ campaign, and he taught me a lot about giving back to the community. He started the West Island Career Centre, and was instrumental in establishing the West Island Palliative Care Centre. He talked to Philippe Couillard about me, and I was hired to work in his office when he was Health Minister.” 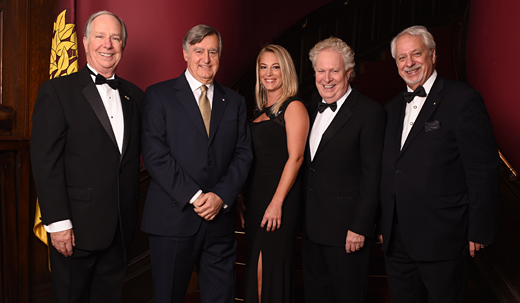 Here I was, spending Monday to Friday in Quebec City, meeting all the interesting and very smart people. Within a year, I was promoted to Associate Chief of Staff.”

“My main task was to keep the Shriners Hospital in Montreal. It was an uphill battle, because they had already decided to move to London, Ontario. The reason we won and the Shriners decided to stay is because the Provincial Government, the Mayor, and the hospital administration all worked together as a team. It was a good example of government and philanthropy working together.”

Julie’s career was in high gear – but she had some life choices to make. “I wanted children, and going back and forth to Quebec City wasn’t conducive to starting and raising a family.”

“I called people I knew at this hospital. I knew everyone from the Shriners campaign – and I was offered a position in the Director General’s office. My job was to continue working with the Shriners and on Government Affairs. The Glen Campus was not yet built.”

“What inspired me to come here is the community behind it. They still support us, and inspire us to innovate. As a community, we all want and deserve the best care possible.”

“At the MUHC Foundation, patients and their families are at the heart of our mission, and we understand the importance of having world-class patient care available to them when they need it most”

“We’ve accomplished a massive voluntary merger of different hospitals, and at the same time they have retained their identity. The Children’s is still The Children’s and The Shriners and so on. The big difference is that we share in this world-class facility. These new buildings have helped enormously in recruitment.”

I ask Julie where her energy comes from – what’s her source of enthusiasm. “When I was young, I was really sick and through a misdiagnosis, I lost the sight in one eye. My parents were really upset, and I was determined to live every day to its fullest. That’s why I joined everything. I try to instill that confidence in my kids.”

“That’s what motivates me to make a contribution here at the Hospital Foundation. There are inspirational moments when I meet with the doctors and researchers who are developing breakthrough procedures and research. Their enthusiasm is infectious, and all they ask is for a little more financial help to assist them in their work. When we go back to them with the funding they requested – they know that someone listened.”

“The consequences of this support are positive. The MUHC has gained an excellent reputation as an international hub of medical research. We are attracting some of the world’s leading researchers; and encouraging local medical ‘stars’ like Dr. Gerald Fried to stay in Montreal. We are surrounded by genius.”

During the construction of the Glen Campus, Julie took on a variety of roles at the hospital; including John Rae’s request that she take on the Best Care For Life Campaign. The goal of raising $300,000,000 was achieved and surpassed. “The commitment of Montrealers to this hospital, their hospital is incredible. We benefit from having dedicated Board members from different professional fields who share their collective wisdom in our decision-making processes. We run this like a business, so that a minimum if the revenues are used for expenses and administration, and a maximum goes to the fund research and equipment. We need to show that our donors’ gifts have an impact.” As the reputation continues to grow, Julie reports that more and more people are including a bequest to one of the hospital foundations as part of their estate planning.

“It’s remarkable that as of 2015, The MUHC and Royal Victoria Foundations are integrated with a single President. We have an excellent team here to meet our funding objectives. The MUHC is a touchstone for the English community in Montreal. The ongoing support and engagement of the community is proof of that. We have a responsibility to honour that support.”

Julie Quenneville has come a long way since she started volunteering at the West Island YMCA at age thirteen. Her experience in journalism, government and philanthropy are proving to be a valuable asset in her mission as President of the MUHC Foundation. For more information about the MUHC Foundation and RVH Foundation, upcoming events and to discuss a donation, please call: 514-843-1543 or visit: www.muhcfoundation.com