Max Raabe has a fascination with popular music of the 20s and 30s, and with his fellow musicians in Palast Orchester, he travels Europe and North America entertaining enthusiastic audiences; many hearing these elegant songs for the first time.

The Palast Orchester was founded in 1986 by Max Raabe and a group of fellow music students attending the Berlin School of Music in order to play music from the period of Germany´s Golden Twenties, and to earn money to pay for their studies. In 1992 they found themselves in the German charts with their song “Kein Schwein ruft mich an” (Why does no one call), an original Raabe composition. He was presented with the ECHO Classic in 2000 for his interpretation of “Mack the Knife”.

“The lyrics of many of these songs are humorous, and full of double-entendres; which are in contrast to the elegance of the musical arrangements. And while we’re having a lot of fun during our performances, we take this music very seriously. We use the original arrangements, many of which we found in second had music stores. We are as dedicated to this music as classical musicians are to Brahms or Beethoven.” 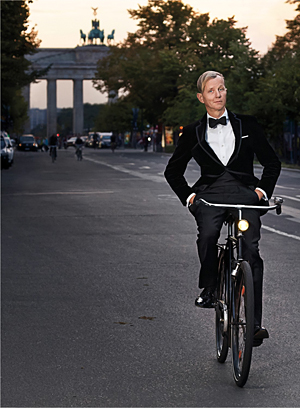 “We entertain our audiences, and we all know that our music has to touch them immediately. We can choose our repertoire to suit the audience because we have over 600 songs in our book; that includes compositions by Cole Porter and Gershwin.”

I asked Max about their performances at New York’s venerable Carnegie Hall; “It was indeed an important concert for us. But then, we approach a concert in a small town in Germany with the same preparation, focus and enthusiasm once the lights go up and we take the stage.”

In addition to the standards of that era, Max and his musical friends have adapted hits such as Tom Jones’ Sex Bomb, Oops I Did It Again by Brittany Spears and Super Trouper by Kiss. But it’s the compositions of the period that has audiences call for Encores.

With the elegance of Fred Astaire and the musical acumen of the Dorsey brothers, Max Raabe is the ringmaster of an evening, always making sure that his former classmates in the Palast Orchester have their time in the spotlight. “When it’s time for the orchestra and a solo, I step aside into the semi-darkness. When my cue comes up – I’m back in the spotlight singing.”