I recently attended a presentation by Coalition Avenir Quebec (CAQ) leader François Legault, followed by a question period moderated by the event organizer Julie Quenneville, President of the MUHC Foundation. It was the first event to be co-sponsored by two venerable Montreal private clubs; The University Club and the St. James Club. The St James Club dining room was packed to capacity, and Mr. Legault gave forthright and frank responses in French and English.

Early in his remarks, Legault made this statement; “Never, never will the CAQ hold a referendum. I can’t say it clearer than that! Article #1 of our project is to build a strong Quebec within Canada. We need to negotiate with the Federal government over a period of years.”

François Legault grew up in Ste-Anne-de-Bellevue on Montreal’s West Island in a middle-class family. After graduating from Université de Montréal’s HEC business school, he started his career as an auditor and team leader at Ernst & Young, where he worked from 1978 to 1984. 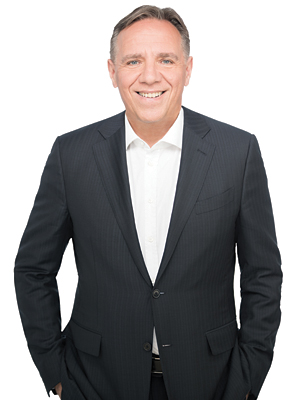 He gained airline experience as Director of Finance and Administration for Nationair Canada in 1984 and with Quebecair; before he co-founded Air Transat in 1986 and served as its president and CEO until 1997. During his years in the private sector, he served as a board member for companies such as Provigo, Culinar, Sico, Technolab and Bestar.

“We need to improve our school system, and encourage our students to take math and science subjects. We also need to understand that vocational training is important and that our young people can earn a good living as technicians, builders and skilled tradesmen. We have a challenge to better finance our universities.”

Legault champions to concept of less and better government, stating that the CAQ can provide better management. “We want to encourage entrepreneurship. It takes 6 months for a survey for a mining company in Germany to determine if they can go ahead with a mining project. In Quebec it takes 3 to 5 years!” he exclaimed. “What company is going to wait for that amount of time to go forward with a business?”

In 2011, with entrepreneur Charles Sirois, Legault launched the “Coalition Avenir Québec”, a non-profit organization whose goal was to promote public political ideas. After writing four documents describing his priorities to ensure Quebec’s future growth, Legault embarked on a major tour of 17 Quebec regions. He came to realize that while many citizens were interested in the proposals, Quebec’s political parties were not open to his small ‘c’ conservative proposals. It was then that he and others founded a new party: the Coalition Avenir Québec (CAQ).He gave the CAQ five core objectives: Investing in education, providing superior and accessible healthcare services, developing an economy of owners, promoting the French language and cultural awareness, and ensuring integrity in public affairs.