Sturgeon Bay – A Segway to Artsy and Quaint

Located on the Door County peninsula, Sturgeon Bay offers visitors a tranquil blend of small town main street shopping, art galleries and boating. With Green Bay in one direction and Lake Michigan in the other, Sturgeon Bay and the Sturgeon Bay Ship Canal effectively cut Door County and the town of Sturgeon Bay in two. So, with all this water, why not start exploring the area by boat? 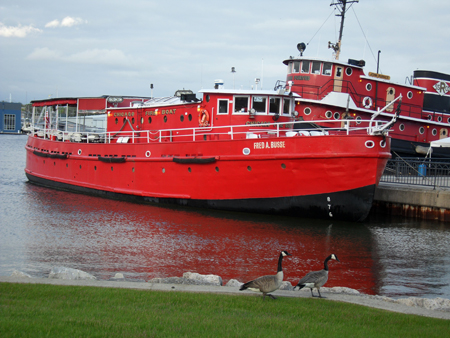 The Door County Fireboat began life as a City of Chicago Fireboat in 1937. While the hose still functions impressively, the boat has long been re-assigned as a touring boat. Cruising towards Green Bay, we pass under the raised Michigan Street Bridge and cruise pass a ship yard where massive industry vessels await their next voyage through the formidable waters of the Great Lakes. The scenic waterway travels along Potawatomi State Park to Sherwood Point Lighthouse at the entry to Green Bay. For a more intimate cruise you can board Sail Sturgeon Bay’s 33 foot boat. Both boats also cruise the canal towards the Pierhead Lighthouse at the entry to Lake Michigan. (www.sailsturgeonbay.com)

After the cruise, dinner at the waterfront Sonny’s Italian Kitchen and Pizzeria was a true feast. Our large group sampled multiple types of pizza and pasta, including a couple of rave-worthy seafood pasta dishes. All topped off with a wood fired cherry cobbler that resembled a cherry pizza with vanilla frosting. (sonnyspizzeria.com)

More and more, Segway tours are becoming a popular choice for tourists across the globe. So I thought it was about time that I discover just why these tours have caught on. In a parking lot just beside the Michigan Street Bridge our group met the guides from Glide N.E.W. Segway the Door. After a brief demonstration and explanation of the basics we each tentatively stepped up on our Segways. With a guide in front of me and the Segway set to turtle speed, I began to maneuver the two-wheeled machine. Leaning forward I went straight. Steering required me to ever so slightly adjust my weight over each leg. It all seemed quite easy, accept for one little thing: stopping! Leaning back at the waist should cause me to stop. But it was not working. I was still moving slowly forward. Uneasiness began to set in. My helpful guide soon realized that I needed to place my feet slightly further back on the Segway to align my center of gravity. This tiny adjustment remedied the problem. With the group ready to go, we switched the Segways to regular speed and rolled out of the parking lot. Within a moment I was crossing over the bridge and grinning ear to ear. Along roads and sidewalks, up and down hills we explored the waterfront and heard about a ghost that is said to haunt a local B&B. When one of our group took a fall we all realized why helmets are mandatory, but on the whole everyone managed very well – in a group that must have spanned in age from 20’s to 60’s. When we rolled back into the parking lot I was dismayed to have to step down from this fun ride. (www.glidenew.com) 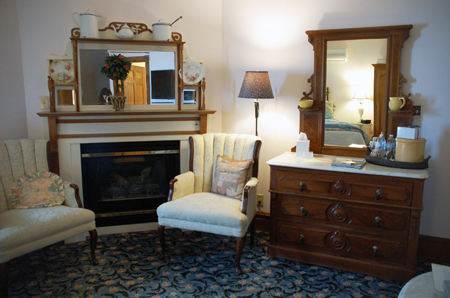 The Vintage Rose Room at the Inn at Cedar Crossing

Those preferring an excursion that doesn’t require a helmet can immerse themselves in Sturgeon Bay’s art world. At Popelka Trenchard Glass you can watch a glass blowing demonstration and then peruse their fine art glass sculptures, jewelry and oil landscape paintings in the gallery. In an historic 1870’s building the Margaret Lockwood Gallery displays abstract paintings. (www.popelkaglass.com, www.margaretlockwoodgallery.com)

In the heart of the historic district, the charming Inn at Cedar Crossing has nine elegant individually decorated guestrooms. Antique furnishings sit alongside flat-screen TV’s in this 19th century building. I stayed in the Vintage Rose room featuring a whirlpool tub, separate en-suite shower and fireplace. No matter which entrée you choose for breakfast you will be happily stuffed with their hearty portions. And should you want a snack in the afternoon? You will find delicious fresh-baked cookies in the breakfast room. The Inn also has a restaurant and bar onsite. (www.innatcedarcrossing.com) 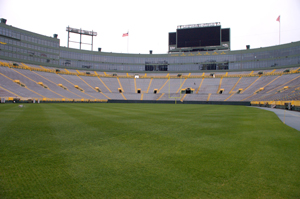 Whether you are a sports fan or not, most of us have heard of the NFL’ s Green Bay Packers.  But what you probably don’t know is just how much this team differs from others in the league. For starters, where most teams are owned by one person or a corporation, the Packers are owned by some 364 000 shareholders – the fans. These shareholders don’t get tickets, dividends or profits, but a true sense of ownership in their team. Everyone of Lambeau Field’s 81 000 seats is a season ticket and people routinely spend years on a waiting list hoping for a chance at those tickets. The list actually has more people on it than Green Bay itself! Another unique quality is that Green Bay, with a population of about 105 000, is the smallest city to have an NFL team. Learning all this while touring Lambeau Field gave me an appreciation for the Packers and the city that I had not expected. The tour includes a walk through the players’ tunnel, with an accompanying audio recording of the cheering crowd. At the new 15 000 square foot, two-level Green Bay Packers Hall of Fame you can see how the players’ equipment and even the shape of the football has evolved over the decades. (www.packers.com/lambeau-field)

At the National Railroad Museum, among the dozens of trains on view (both inside and outside), is a thoughtful exhibit on the history of Civil Rights and Pullman Porters. The exhibit centers around a 1920’s Pullman sleeper car. Information boards tell how the African-American Pullman Porters organized and founded the Brotherhood of Sleeping Car Porters, in 1925. The Brotherhood of Sleeping Car Porters would become the very first African-American labour union to sign a collective bargaining agreement with a major US corporation. The struggle and ultimate success for labour rights paved the way for the porters to become a strong force in the struggle for civil rights in the decades following. 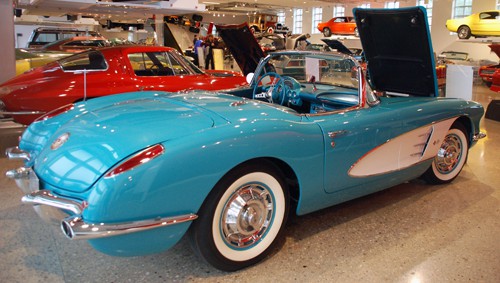 A 1960 Chevrolet Corvette at the Automobile Gallery

The rolling history on display includes Eisenhower’s WWII command train, the 1.1 million pound, aptly named, Union Pacific “Big Boy” and a railway snowplough.  On a smaller scale, is the Transportation China Collection exhibit featuring hundreds of plates, cups and silver used on railroads, steamships and airlines – from the days when fine dining and traveling went hand-in-hand.

The Bauer Drumhead Collection is another interesting exhibit. Drumheads were illuminated signs usually bearing the train’s logo and attached to the back of the last car. They were often large and round – much like a bass drum. This collection of 40 drumheads is the largest known to exist. Their 1967 Expo Limited, drumhead from “a special train that carried passengers to and from the Montreal Expo” caught my eye! (www.nationalrrmuseum.org) 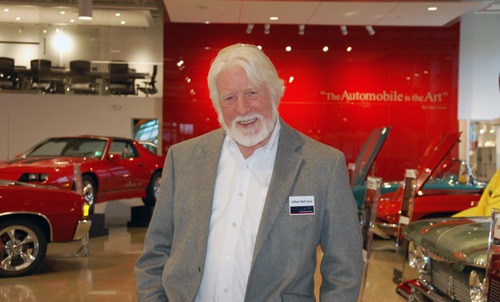 Behind the preserved glass facade of a former Cadillac dealership, The Automobile Gallery is a bright modern space “Where the automobile is the Art.” Close to fifty shiny, colourful cars dating from the early 1900’s up to today fill the bright 18 000 square foot space. Opened in January 2016, the gallery is the brainchild of entrepreneur and car collector William “Red” Lewis. An exceedingly charming man in his 70’s, Red’s love of automobiles is infectious. Red and the volunteer guides, known as the pit crew, offer up a wealth of knowledge on each vehicle. While viewing a 1960 and 1961 Plymouth, Red kindly pointed out the many aesthetic differences between the two. The Chrome Green 1960 Fury features pronounced fins at the back, an almost rectangular steering wheel and front swivel bucket seats. The salmon/dusty rose 1961 Fury has a rounded back end without fins, a round steering wheel and a re-designed dashboard. 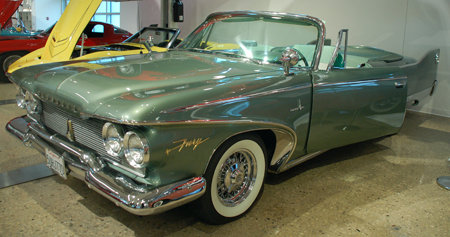 A Chrome Green 1960 Fury Plymouth at the
Automobile Gallery.

With so many cars on rotating display, there is surely something to catch everyone’s eye. My favourites are a stunning 1960 turquoise Chevrolet Corvette, a 1917 electric Milburn with batteries stored under the hood and in the trunk, a 1929 steel blue Ford Model A with a rumble seat and a 1912 Maxwell Messenger with a 2 cylinder engine, brass acetylene gas lamps and twin kerosene side lamps for night driving.  There are even a few cars that you can sit in – like a 1981 Delorean. So, bring your camera and strike your best Marty McFly pose. The gallery is open on weekends and varied weekdays. (www.theautomobilegallery.org)

Frozen custard is a popular treat in Green Bay and a delicious one, too. Smoother and denser than ice cream, treat yourself to some tasty frozen custard at one of three Zesty’s locations. (zestyscustard.com)

Black & Tan Grille is a premier fine-dining restaurant in the Historic Bellin Building in downtown Green Bay, just steps from the Fox River. Owner/Chef Aaron Morse is building a reputation for his culinary creativity by blending the freshest ingredients with a flair for presentation. (www.blackandtangrille.com)

Not By Bread Alone is a bread shop and deli that bakes fresh bread from scratch daily. Their lunchtime crowds testify to the quality of their sandwiches, soups and pastas. I recommend their savoury Sausage Bread. (www.notbybread.com)

At the Cannery Public Market the term “farm to table” is taken very seriously. All the Limousin beef served is proudly raised on the owner’s farm. Striving for the perfect marbled beef, their cows are fed grass, hay and grain. (thecannerymarket.com)

For after dinner drinks check out the Titletown Brewing Co. Tap Room & Tap Roof. Enjoy a Titletown beer and a great city view from the patio of the Tap Roof or go inside the Tap Room to settle down beside the fireplace or watch a game by the bar. (www.titletownbrewing.com) 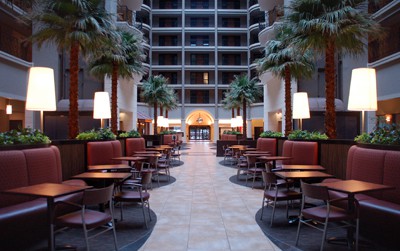 While in Green Bay I stayed at the Hyatt Regency. Located in the heart of the city, the hotel offers large modern studios and suites with a separate living room and wet bar. Additional amenities include an indoor pool and breakfast dining in the central atrium. (greenbay.regency.hyatt.com) 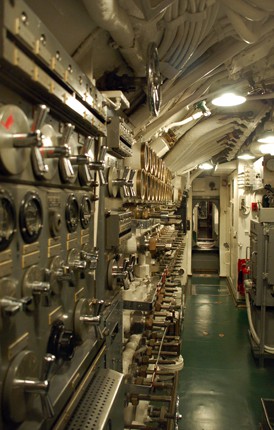 Endless dials and valves line the walls of the USS Cobia

A short drive from Green Bay or Door County, Manitowoc is home to the largest maritime museum in the Midwest – the Wisconsin Maritime Museum.  Moored alongside the museum is the USS Cobia, the most intact World War II submarine in the country. The Cobia was built in Connecticut; but Manitowoc saw the construction of about 28 similar WWII subs. Guided tours of this National Historic Landmark offer an eye-opening look into the cramped life aboard a submarine.  (www.wisconsinmaritime.org)

Though there are only about 15 people on the tour with me, the tight confines of the sub are already apparent. The realization that 80 men lived aboard this sub is mind-boggling. Every inch of space was used – sleeping bunks were even placed on top of torpedoes. It must not have been a very restful place to sleep.  The dining quarters consist of four small tables with bench seating. All along the walls are endless bunches of pipes and wires. On the tour we learn that the Cobia sank 13 Japanese vessels and faced many perils during the war, including a harrowing choice between remaining at depth and suffocating or surfacing and risking a lethal enemy attack. The crew decided to surface and to their great relief the enemy had moved on. Moments like that are why life aboard a submarine is often described as 90% boredom and 10% terror.

The museum has further exhibits on the Cobia and the ships that traverse the Great Lakes, including a diorama of (attention Gordon Lightfoot fans!) the wreck of the Edmund Fitzgerald. After visiting the Maritime Museum, take a two minute stroll to Beerntsen’s for lunch and an array of sweet desserts. Opened in 1932, Beerntsen’s is famous for its old-fashioned decor and over 125 types of candies, chocolates and special ice cream sundaes. (www.beerntsens.com)