ONCE UPON A TIME… THE WESTERN

A New Frontier in Art and Film

The first major multidisciplinary exhibition on the myths and stereotypes associated with the genre of the Western film from the 19th century to today.

The Montreal Museum of Fine Arts (MMFA) is presenting ONCE UPON A TIME… THE WESTERN. This major multidisciplinary exhibition offers a new interpretation of the Western film genre by examining its links to the visual arts
(painting, sculpture, photography) from the mid-nineteenth century to today. Initiated by the MMFA, the exhibition is co-produced with the Denver Art Museum (DAM). 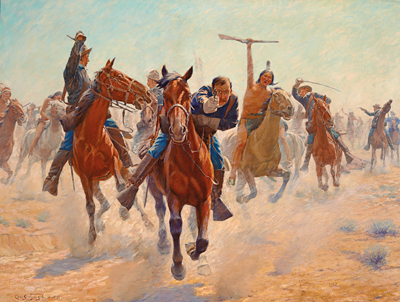 ONCE UPON A TIME… THE WESTERN celebrates the beauty of the Western while revealing some of its more sombre aspects. The exhibition explores themes related to questions that are still current today, such as violence, the stereotypical representation of the sexes, interracial relationships, and the fabrication of stereotypes. It addresses certain prejudices against the peoples of the First Nations that it helped perpetuate. It also shows the extent to which art has the power to both maintain and challenge the most widespread beliefs.

The exhibition studies the creation, transmission and transformation of the Western myth in North America in both the United States and Canada. Over 400 paintings, sculptures, installations, photographs, artefacts, film stills and excerpts show how the genre has evolved through ongoing dialogue between the fine arts and cinema.

Mary-Dailey Desmarais, Curator of International Modern Art at the MMFA, co-curator of this exhibition who is  responsible for the Montreal edition, explains: “The Western has always been more than a simple story of ‘cowboys and Indians,’ outlaws and bandits and saloon brawls. At its core, the Western is an epic story of nation building, of the triumphs and failures, the fantasies, and even the hypocrisies that the process entails. And above all, behind the legends, real lives were lived. The expansion into the West destroyed entire populations of Indigenous people, leaving in its wake violated treaties and broken lives. One of the concerns here is to examine the stereotypes of the First People as perpetuated by the Western, by demonstrating the power of art not only to shape myths but to shake up the most firmly established among them.”

Evolution of a genre, from the twentieth century to the present day 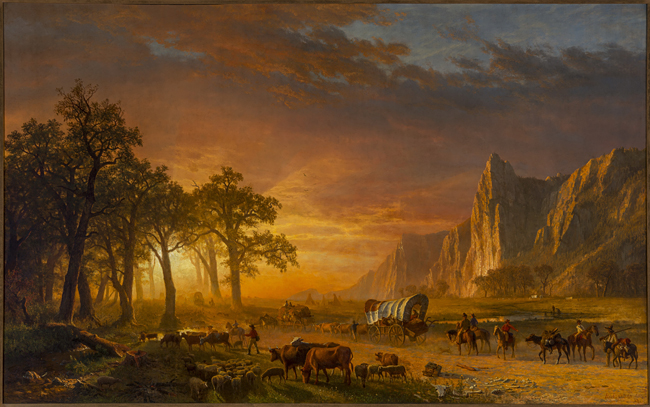 ONCE UPON A TIME… THE WESTERN comprises three elements, like a movie: the set, the cast and the action. The great paintings of Western landscapes, popular novels and Buffalo Bill’s Wild West show, all of which helped drive American mythology. A look at the types of figures that presided over the creation the Western, including the cowboy, the “Indian,” the trapper, the scout and the pioneer, have much to tell us about the prevailing stereotypes, conveyed by artist-illustrators such as Frederic Remington, Charles Schreyvogel and Charles Marion Russell. The typologies for action are established: attacks on a stagecoach or train, duels and saloon brawls and cavalry charges. 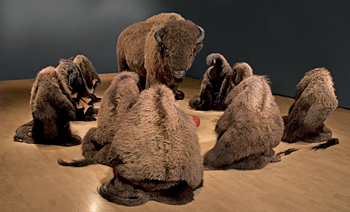 The exhibition also traces the evolution of the Western, first through photography and then with excerpts from numerous films: from silent shorts (The Great Train Robbery) to the big screen with Raoul Walsh, Howard Hawks, Fred Zinnemann, Robert Aldrich, John Huston, Sam Peckinpah, John Schlesinger and Henry Hathaway, among others. John Ford embodies the culmination of the classic Western, while Sergio Leone, with his iconoclastic detachment, reframes the genre. The overview concludes with the Western revisited, with films by Clint Eastwood, Kevin Costner, Jim Jarmusch, Quentin Tarantino, Ang Lee, Joel and Ethan Coen, Tommy Lee Jones and Paul Thomas Anderson.

The exhibition also shows how the genre served as a means of expression for the counter-culture movement during the Vietnam War, with films that reflected the growing concern for safeguarding personal freedom. Visitors will see, as well, the original Harley Davidson from the film Easy Rider and major paintings by Andy Warhol and Fritz Scholder that speak to the emergence of the American Indian Movement. The final part of the exhibition concentrates on a reinterpretation of the Western genre by contemporary artists from the 1980s to today. Indigenous artists conclude the story, with their own take on the Western.

The Quebec and Canadian contribution 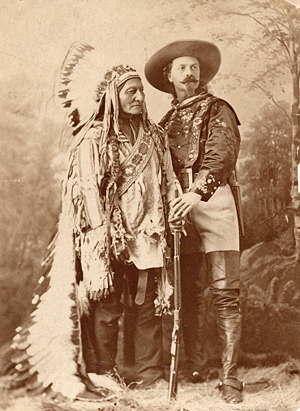 The Montreal edition reveals that the history of the Canadian West has also contributed to the development of the Western through Quebec country and western legends with stars such as singer Willie Lamothe and cowboy Will James.

The exhibition also explores the role of the Canadian landscape and Canadian and First Nations visual artists in constructing the genre, with paintings by Paul Kane, de William Brymner and Henry Sandham, sculptures by Louis-Philippe Hébert, photographs by William Notman, and films by Gilles Carle and Claude Fournier, among others.