What do the fifth grade, a scrapbook, and cancer have in common?  They all served as the inspiration for Dr. Gerald Fried of the McGill University Health Centre (MUHC) to pursue a career in medicine.

It was a Grade 5 scrapbook assignment on cancer that led 10 year old Gerald Fried to contact the Head of Cancer Research at McGill University, who not only took his call but accepted to meet with him. He left the interview with more information than a fifth grader could handle. “I remember saying to myself that we needed to find a cure for this awful disease,” he recalls. “This experience sparked my interest in medicine and I knew that I had found my calling.” Born and raised in Montreal, the current Surgeon-in-Chief at the MUHC is an international pioneer in minimally invasive surgery. Incredibly skilled and dedicated, there were many opportunities for Dr. Fried to leave his hometown, but as fate would have it, he never left. 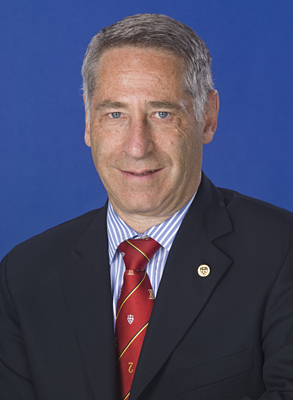 Dr. Gerald Fried is the current Surgeon-in-Chief at the MUHC

He was accepted into medical school at McGill University in 1971 and after completing additional training in the U.S., Dr. Fried was presented with an opportunity to stay. “I was offered a position in Texas but I had some restrictions with my VISA that required me to return to Canada,” he recounts. “They were so keen for me to stay, they actually called the state senator in Washington, D.C. and I was granted an exemption. However, I had given my word that I would come back to the MUHC and I didn’t want to break that promise,” he says.

Dr. Fried was the first to perform laparoscopic surgery at the MUHC, a minimally invasive technique that makes recovery quicker and easier for patients. He first learned this procedure in Germany specifically for the removal of the gallbladder. Dr. Fried is not only considered a leader in this field, he has trained hundreds of surgeons from across the country. “Every month, we ran a 2-day course and trained 24 surgeons from across Canada. The idea was that each of these new ‘trainees’ would then return to their respective hospitals and teach their own staff.  Within only a few years, nearly all of the surgeons in the country were trained in this procedure,” he states with pride.

The MUHC was becoming renowned in minimally invasive surgery and the world was taking notice. In the late 1990s, Dr. Fried was recruited to become the chief of minimally invasive surgery at the New York Presbyterian Hospital, the largest hospital system in New York. “The position was a great opportunity so I decided to pursue it. I had closed my lab, found my family a place to live, and we were ready to go,” he states. But after months of issues related to his contract, Dr. Fried withdrew his candidacy. “It was a really transformative moment for me and it ended up being the best thing that ever happened to me. There was a lot of friction within the various components of the New York Presbyterian Hospital system early in the merger between New York Hospital and Columbia Presbyterian Hospital. While I may have gained success in the U.S., it would have eaten me up as a person,” he says.

Staying in Montreal was a decision that he has never regretted. “I love this city and I think that there is something special about staying in a place for a long period of time,” he explains. “My circle of friends is diverse and my family as well as my wife Karen’s family are here and that has made a huge difference.”

After spending time with Dr. Fried, you realize that the words loyalty and mentorship are synonymous with him. While he explored new opportunities with surgeon-like precision, he always took into account those who helped him get to where he is today. “The MUHC went out of its way to train and support me and I could not turn my back on the institution that had given me so much,” he says. Although retirement is not in Dr. Fried’s sights just quite yet, he has taken notice of the scale of his impact in surgery and in Montreal. “At a certain point in your career, you start to transition from the priority being your own advancement to thinking about your legacy. My mentorship is what I am most proud of. I have trained leading Canadian surgeons and some from Kuwait, Saudi Arabia, Israel, Italy, and Mexico, among others. It’s been extraordinarily satisfying to watch them have so much success. We are in great hands with the next generation,” Dr. Fried says humbly.

An avid tennis player and world traveller, Dr. Fried is very grateful for pursuing a career in medicine and being able to practice in a city he has always called home. “Medicine requires a lot of hard work. You are often up in the middle of the night and wind up getting called away from special events and your family. But, you also have the ability to touch people’s lives, and for me, there is really no greater privilege,” he explains. “The best decision I ever made was staying in Montreal.  I don’t think I could find a place that could give me the professional pleasure and satisfaction as well as the richness of life in general with my family,” he says.

The MUHC Foundation will be honouring the achievements of Dr. Fried at its annual Le Bal Rouge gala on January 19, 2018.  To purchase tickets, please visit www.muhcfoundation.com