Armed with a Political Science degree and an indomitable personality, Nicolas Duvernois overcame immense obstacles to create Pur Vodka, which has won fifty-seven awards, including World’s Best Vodka an astounding five times in the past seven years.

During our conversation, Nicolas stated; “You’re not supposed to win international awards – especially with a new product…but I did.”

Nicolas’ story is both inspiring and fascinating. It started when he and a few best friends decided to open a restaurant. “None of us had any experience – other than we liked to go out to restaurants. We quickly learned that it was a lot harder than it looked, and before long, our group of best friends were becoming ‘worst enemies’. One of my responsibilities was going to the SAQ (Société des Alcools du Quebec) to buy wine and spirits for the restaurant. I’d buy a few cases of wine – and many more cases of vodka. I asked myself; ‘Who was drinking all this vodka?’ Turned out that our customers drank a lot of vodka. Most of the Martinis were made with vodka and a lot of the cocktails. A group of friends would buy a whole bottle for their table.”

Trying to source local ingredients and products for the restaurant, Nicolas asked which Quebec vodka was the best during his next visit to the SAQ. “We have the best water on the planet – so I figured that we should have the best vodka. To my surprise – I was told that, ‘It doesn’t exist – there isn’t a vodka produced in Quebec’. Well then I thought – I’m gonna be the first one. Those five letters changed my life…V-O-D-K-A.”

Created by Nicolas
Duvernois, Pur Vodka has been judged World’s Best Vodka five times in the past seven years

Perhaps it was an easy decision for Nicolas to make – but the process certainly wasn’t easy or glamorous. “I kept my student job, working as a night janitor at Sainte-Justine’s Children’s Hospital. After my experience in the restaurant, this time I did a business plan and lots of research. I was determined to make it work, knowing that I’d be the first one to make a vodka in Quebec. I also wanted it to be a really good vodka!”

“Four years later, I had my first bottles of vodka. I could not have done it without the moral and financial of my girlfriend Karolyne Auger, who is now my wife. With her support, we had created premium vodka with specially designed bottles.”

The SAQ published a tender for a new vodka, produced in Canada. Nicolas submitted Pur Vodka, but was stunned when it was rejected. “I thought there must be a mistake! They told me that Pur Vodka was rejected because it didn’t have any sales. How can a new product have a sales history?”

Disappointed but not defeated, Nicolas began to research all of the competitions where he might be able to enter Pur Vodka. “All the competitions made reference to the Global Vodka Masters competition in London, England. So I entered and sent off two bottles.”

“A while later I was out playing with our dog Romeo, and I saw that I had an international call coming in. My Dad lives in France, and I answered ‘Bonjour Papa…’ but it was a lady with a British accent saying, ‘Congratulations – you’ve won the competition for the world’s best vodka!’ I was stunned – I won best vodka at the most prestigious competition in the world!”

With the sudden ‘overnight’ success of Pur Vodka, Nicolas appears to be well-grounded. Perhaps because his success wasn’t easy and it wasn’t overnight. “I’m the luckiest man in the world. I met my girlfriend five days before my friends and I opened that restaurant. She stayed with me through that awful experience, and all through the process of developing Pur Vodka. She supported me and loved me. We’re married now and we have two beautiful daughters.”

Just days before our conversation, Nicolas was in Paris for the launch of Romeo’s Gin at Collette, a smallish but trend-setting store in Paris. The world’s coolest products are sold in Collette, and the British launch for Romeo’s Gin will be at Selfridges in London.  “Gin is also very popular in Quebec, and I wanted to see if we could develop a gin. I use key words a lot, and ‘fresh’ was a keyword that I used to describe what I wanted for our gin.”

Nicolas and his wife were enjoying lunch with a friend on July 4th a few years ago. “My wife was having a cold soup, and said. “I think I’ve found the recipe…’ I thought she was talking about the soup – but she said ‘taste this.’  It tasted fresh… it had the freshness that I wanted. It had cucumber, dill, almond and lavender in the ingredients. We took some home with us and I took it to our distiller; and we launched Romeo’s Gin in May 2015, named after my dog. It’s now the second most popular gin in Quebec. We feature a Quebec artist on the bottles of each edition. It’s now being sold in Collette in Paris and will soon be launched in Selfridges in London. ”

“My story is a story of perseverance. Success doesn’t happen until you follow the path to success; and that route has many challenges and even failures along the way. I’ve written a book about my experience, and it’s been a four-time Best Seller in Quebec, and it will soon be published in English.”

Nicolas is now the President of the Jeune Chambre de Commerce de Montreal in addition to being President and Director General of Pur Vodka and Romeo’s Gin. He’s also President of Adopte Inc. – a hands-on group of successful executives in business and the arts who mentor bright young entrepreneurs. It’s a group that Nicolas co-founded with entrepreneur Anne Marcotte and the enthusiastic support of Montreal’s super-entrepreneur, Philippe de Gaspé Beaubien III.

The story of Nicolas Durvernois and how he met and overcame the business and life challenges that he faced can serve as an inspiration for people of any age who believe that they have a solid product or development idea. It’s a refreshing story of a man who has maintained his integrity, sense of fun and dedication to his family. To learn more, please visit: www.nicolasduvernois.com

“When I went looking for ‘Quebec Inc.’ for help to launch Pur Vodka, I didn’t know who to contact or how to reach the leaders of Montreal and Quebec’s business community. So I thought that I should establish a way to help young entrepreneurs to find guidance and financing.” Nicolas Duvernois explains his motivation to establish a network of successful executives to ‘adopt’ a young entrepreneur for one year, providing guidance and advice. As the concept grew during his conversations with co-founders Anne Marcotte and Philippe de Gaspe Beaubien III, a dynamic investor and entrepreneur; the trio made sure that the foundations of Adopte Inc were realistic and beneficial. 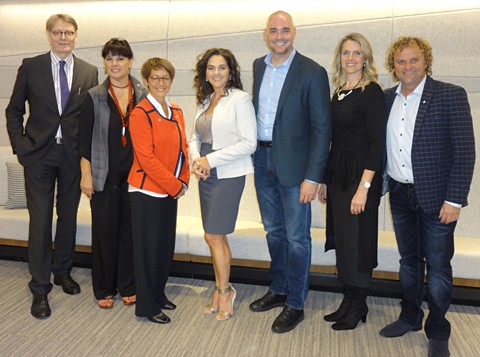 Those who qualify as adoptees receive an annual salary of $24,000 to take care of their basic financial needs and to allow them to focus on developing their business. The mentors will meet with their adoptees twelve times – offering advice and at times, encouragement. The young entrepreneurs will receive accounting advice from Deloitte, legal advice from the international law firm Norton Rose and no-charge chequing account and payroll services from Desjardins. The mentors will invite their adoptees to attend Board and strategic planning meetings as an observer, to gain first-hand knowledge of how these important business meetings work. In addition to coaching from their mentors, the Adoptees will also receive professional training.

The purpose of Adopte Inc. is to increase the chances for the young entrepreneurs to succeed by providing easy access to the counsel of successful entrepreneurs and executives.

The enthusiasm was palpable at the first anniversary meeting, and the success stories inspiring. The young entrepreneurs are creating jobs and contributing to the economy. For more information about Adopte Inc, please visit: www.adopte-inc.com