“Relationships with women taught me a lot about humanity and emotions, and my children: they really transformed me. It was like a part of my heart hadn’t opened yet.”

If Montreal’s prominence in the evolution of an artificial intelligence industry in the past five years is primarily due to the leadership of Yoshua Bengio, we are all lucky he became a father and is a beloved son.

“Two main things changed me,” he says. “Relationships with women taught me a lot about humanity and emotions, and my children: they really transformed me. I mean it was like a part of my heart hadn’t opened yet. You know having to take care of somebody and knowing that that person depends on you is really a transformative experience. When I was in my late 20s, it was a big thing.”

Today, the University of Montreal professor is a sought-after collaborator. He’s founded or cofounded five different institutions and has been a key ingredient in both Google and Microsoft setting up artificial intelligence centres in Montreal. He recently became the scientific director of a new non-profit linking his current school with his alma mater, McGill. That organization will be publicly launched once it finds a CEO. 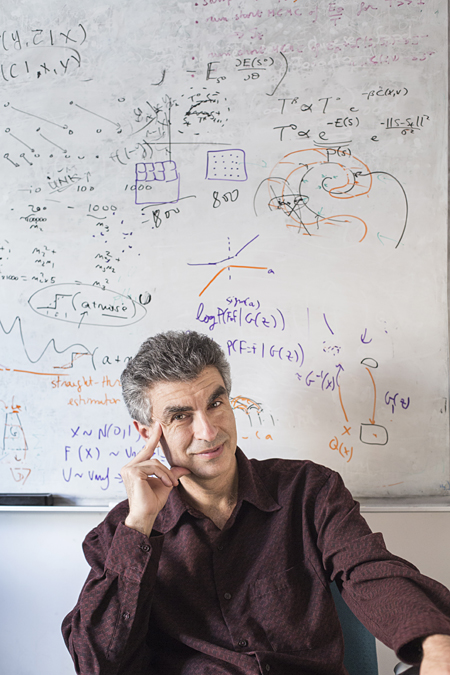 Professor Bengio in front of his whiteboard,
captured by photographer Christian Fleury.

He’s also the co-founder of Element AI, an entrepreneurial start-up dedicated to showing companies how artificial intelligence can help businesses run more effectively, save costs or both.

Indirectly, both of those efforts stem from two research laboratories founded by Bengio in the early 1990’s: the Laboratoire d’Informatique des Systèmes Adaptatifs (LISA), and the Montreal Institute for Learning Algorithms (MILA).

MILA has been called “the largest concentration of deep learning researchers in the world.”

As a teenager, no one could have guessed that the shy introvert would be inspiring millions of people to think about computer to computer learning (aka deep learning). His Côte St. Luc high school days as an immigrant from France weren’t easy.

“We came to Canada when I was 12,” he says. “My grandparents, the parents of my mother, were already here. I guess we had visited them before and my mother really liked the place…When I arrived here with my brother, it was a bit of a shock. School was difficult to survive with a French (from France) accent and I was not a very social kid. I was very inward looking. I didn’t have many friends. I had my brothers’ friends basically and I wasn’t socializing very much. I was a nerd and reading a lot of science fiction.”

Bengio was good with languages, so in addition to the Quebec accent, he picked up English. He says he was introduced to the world of artificial intelligence by science fiction authors like Arthur C. Clark. That’s when he began thinking about how computers themselves learn.

not just to perform tasks but to understand the world around us.”

“My vision is of algorithms that can make sense of all the kinds of data that we see, that can extract the kind of information in the world around us that humans have,” Bengio says. “I’m fairly confident that we’ll be able to train machines not just to perform tasks but to understand the world around us.”

Throughout his studies at McGill from 1982 until 1991 and for two years, first at MIT and then at AT&T Bell Laboratories in the United States, he’s been focussed on trying to advance deep learning by computers. Bengio says AI knowledge also has broad applications in the medical field, and could be used to help doctors read scans, research and diagnose conditions, or sift through the massive amount of information contained in the human genome. Every example he cites relates to how computers can help humans.

He says that much of his innovations depend on having a good relationship with the graduate students he works with, something he credits to his experience as a father.

“I think a lot of the success I’ve had as a researcher is because of the relationships I have with the students,” he says. “It’s a little bit like a parent listenership. Successful labs are like communities where people feel like they’re in a family. They feel taken care of, but are also recognized and encouraged and pushed forward. Students tell me how much they appreciate the intense feedback I give them, and also the environment here. I think I owe a lot of that to having been a father. At the same time of course I’m getting a lot out of their contributions to the work I’m doing. They’re the ones doing most of the science. People don’t realize how important the work of grad students is. They are the ones who have many of the ideas that are in the papers and 99 percent of the grunt work in experiments is performed by them.”

Important breakthroughs in science don’t happen suddenly, or because one intelligent person has a “Eureka moment,” he says.

That understanding made him realize that he could have all the innovation he’s ever desired and yet remain in Montreal where his parents and both his sons live. He began speaking about turning Montreal into a global centre for the research development of artificial intelligence a few years ago. His idea has since captivated political leaders, entrepreneurs and businesses such as the Power Corporation, the Royal Bank and others. The federal government has already agreed to spend $213 million in AI projects at four Montreal universities over the next seven years. This year, Element AI received $135 million from Microsoft, Intel and Nvidia.

More investments are expected in the coming months. To Bengio and his team, that’s progress.