Moshe Safdie will be a keynote speaker on October 17 at the inaugural World Design Summit in Montreal, from October 16 – 25. International organizations representing design, architecture, urban planning and landscape architecture, are coming together for the first time with representatives of intergovernmental and supranational organizations and specialized agencies, such as UNESCO, OECD, UNEP and ICLEI.

The goal of the conference is to make a declaration and to establish a 10-year implementation framework for international co-operation to build better communities and quality of life.

While Moshe Safdie has achieved international recognition and success with his Boston-based architectural firm, Montreal remains an important part of his personal and professional life. The local success his ground-breaking Habitat ’67 condominium project was relived as part of this summer’s Expo ’67 50th Anniversary celebrations. 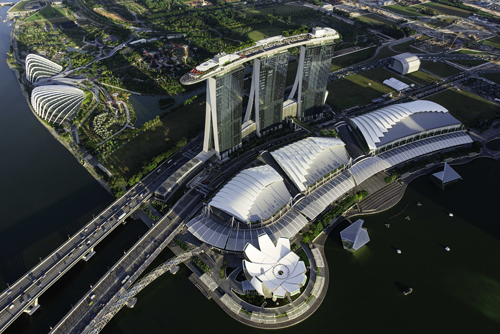 “Habitat was a great jumpstart to my career, but there was tremendous resistance to the concept. I shifted my practice to institutional buildings such as museums and libraries. The National Arts Centre in Ottawa is one of my buildings.”

“The project that really garnered international attention for our office was the Marina Bay Sands Resort, a vacation resort in Singapore. It’s a $4 billion resort development with three high-rise buildings, with a two and a half acre park on the 59th floor – set like a tabletop over the three towers. It has become an icon for Singapore, similar to Australia’s Sydney Opera House.” Continuing – Moshe states; “The idea is to design buildings with the lives people in mind – the people who are actually going to live and work in the buildings we design. Too many of our new towers are sculptural, with only lip-service being paid to the occupants.

“Sometimes I feel like a missionary when I speak to my fellow architects and the development community, reminding them of the issues we face and the need to solve the problems. We have to learn how to deal with high density in residential developments – to make allowances for the people who will live in them, including green spaces and community areas. High rise buildings are here to stay for the foreseeable future – so we’d better solve the problem.”