Tall Ships on the Quays

More than 40 Tall Ships will be sailing Canadian waters to honour the 150th anniversary of the Canadian Confederation in 2017. They are scheduled to stop at host ports in Ontario, Québec and the Maritimes, giving thousands of people the opportunity to admire the majestic beauty of these cathedrals of the seas.

Two ships will be visiting the Old Port of Montreal: 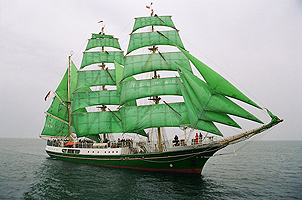 ALEXANDER von HUMBOLDT II has been built with a traditional barque rigg. In total, ALEX-2 is driven by 24 sails with a sail area of 1.360 m2. In favourable wind conditions, she runs up to 14 knots. And if the wind does not blow at all, a 750 horsepower engine helps to reach the next port in time. 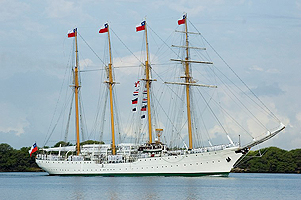 The ship is the sixth to carry the name Esmeralda. The first was the frigate Esmeralda captured from the Spanish at Callao, Peru, by Admiral Lord Thomas Alexander Cochrane of the Chilean Navy, in a bold incursion on the night of 5 November 1820. The second was the corvette Esmeralda of the Chilean Navy which, set against superior forces, fought until sunk with colors flying on 21 May 1879 at the Battle of Iquique. These events mark important milestones for the Chilean Navy and the ship’s name is said to evoke its values of courage and sacrifice.

Construction began in Cádiz, Spain, in 1946. She was finally launched on 12 May 1953 before an audience of 5,000 people. She was christened by Mrs. Raquel Vicuña de Orrego using a bottle wrapped in the national colors of Spain and Chile. She was delivered as a four-masted topsail schooner to the Government of Chile on 15 June 1954, Captain Horacio Cornejo Tagle in command.