Eleanor McCain has produced what may well be a milestone combination of a recording and a 220 page hard-cover book that is a celebration of Canada through a collection of thirty-two songs and a beautifully produced coffee table book. It’s the kind of project that will be at the top of many gift lists this year.

I recently met with Eleanor to discuss the genesis of her concept, and the subsequent enormous task of recording and producing the two-CD album; which includes thirty-two Canadian songs that were recorded with lush orchestration, using ten orchestras that took Eleanor and her team on a pan-Canadian odyssey from Vancouver to St. John’s, Newfoundland.

“I had finished recording my fifth album, and for the first time I had used an orchestra on all the songs. It was a terrific experience as a vocalist, feeling embraced by the music. I began thinking of producing The Canadian Songbook to celebrate our 150th Anniversary, and I carved out a playlist of twenty-seven songs from the pop and folk genres. Having just recorded with an orchestra, I thought it would be great if we could showcase orchestras across the country.”

“However – there was a stumbling block. I knew that in general, people don’t buy CDs anymore; they download recordings. But I remembered that my daughter had purchased 2 CDs because they came with a book. I realized that we should have a high quality book with photos, composer comments and song lyrics. This really solidified the project – I and knew that we now had a complete package.” 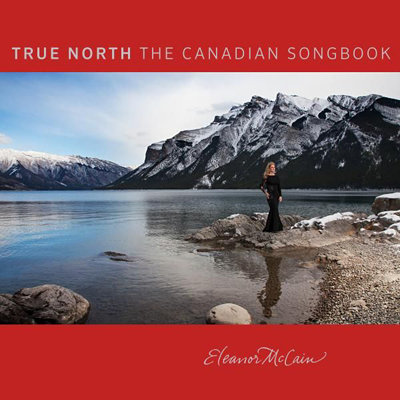 Twenty-two landscape photographers were commissioned to contribute outstanding panoramas and images of our Canadian geography. Canadian designers were selected to create gowns for Eleanor to wear in unique natural settings that included an old-growth rainforest on Vancouver Island and a Saskatchewan wheat field.

The book is published by a Page Two in Vancouver, and printed in Winnipeg by Friesens.

The book is a fine complement to the recordings. Eleanor selected songs written by Burton Cummings, Bruce Cockburn, k.d. Lang, Gino Vanelli, Robbie Robertson, Neil Young, Leonard Cohen, Gordon Lightfoot, Joni Mitchell and twenty-three other Canadian songwriters. In addition to their lyrics, the composers share their insights about how they created the song. It’s both interesting and compelling to learn what their feelings were during the composition of those songs that have earned a place in the Canadian psyche.

“Right about the time that the idea was starting to take shape, producer Don Breithaupt sent me an email saying that he’d like to discuss working with me. Our mothers are close friends, but we’d never really known each other well. Don is a very successful studio musician and producer, now living in Los Angeles. His timing was perfect. I explained the concept in general terms, and Don got really excited.”

“We increased the song list, adding I Can See Hope From Here, a song that Don and his brother Jeff wrote. We recorded the basic tracks the band in Toronto; bass, drums, keyboards and guitars.” Guest artists were invited to contribute and they included musicians such as pianist Jan Lisiecki, guitarist Liona Boyd, trumpeter Guido Basso, Matt Dusk, Natalie MacMaster and many more. Five choirs were selected to participate.

“My favourite guest artist is my daughter, Laura David. She sang beautifully on We Rise Again.”

Eleanor, Producer Don Breithaupt, Conductor Martin MacDonald, Vocal Producer Lorraine Lawson, and recording engineer Jeremy Tusz set out across Canada to record the orchestras and choirs. A few years prior to this project, Tusz had created a mobile recording system specifically for use with orchestras, and Diapason’s equipment and procedures were perfect at capturing the orchestral and choral performances.

This a wonderful recording; and the accompanying book will offer many hours of enjoyable listening and reading. True North: The Canadian Songbook is an ideal gift, and it’s sure to become a most popular corporate gift. At $60, it’s an excellent value. The book and 2 cd package is now available in stores and online. To order or to see local stores with copies in stock: please visit www.eleanormccain.ca Enjoy