Feel the atmosphere of the Expo 67 site! This installation of 24 colour photographs on McGill College will take you back to the hustle and bustle on the islands at that time as well as the spectacular architecture of many pavilions. 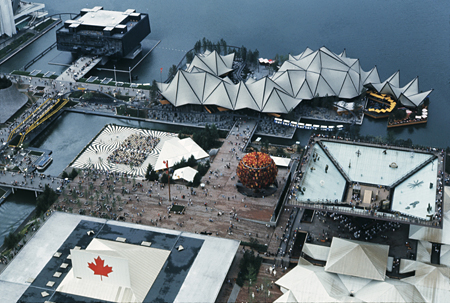 Jean-Louis Frund, a native of Lac Saint-Jean, Quebec, is a distinguished documentary film maker. His some 50 widely distributed films have won him numerous honours, including the Médaille de Chevalier de l’Ordre des Arts et des Lettres from the French government. In 1966 and 1967, he photographed the construction of the Montreal world’s fair, capturing the bold colours and architecture of the pavilions and the buoyant mood of the crowds who flocked to St. Helen and Notre-Dame Islands in the summer of 1967. A series of 24 brightly-coloured photographs will be installed on McGill College Avenue. They have been chosen from among more than 1,000 shots taken by Frund at Expo 67 and are part of the McCord Museum collection, acquired through a donation by the artist.