In December 1991, 60 Minutes declared Branson the “live music capital of the universe”.  But all these years later, can Branson still claim this title and what else keeps this town of 10 500 residents’ regularly drawing 6-8 million visitors each year? I was about to find out…

If You Build it They Will Come 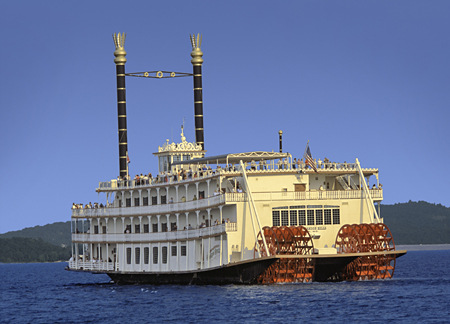 Fifty years ago the Presley’s built the first music theatre in Branson and began a tradition that has put Branson on the tourist map. Now there are about 150 live shows, in nearly fifty theatres, showcasing live music. There is always another show to catch; with morning, matinee and evening performances. Family bands are a big draw in Branson and the talented Haygoods, with their innovative lighting displays, are arguably the best of the bunch. The massive 2000-seat Sight & Sound Theatre (a Christian-faith based company) presents biblical productions on a remarkably grand scale. Currently running, Moses is a high caliber musical with live animals and a three-sided stage that envelops audiences with some the most amazing set designs I have ever seen. The Branson Belle Showboat blends the live show with a dinner cruise on Table Rock Lake. The skillful harmonies of Cassandré and The ShowMen, and blazing footwork of Rhythm (the fastest feet west of the Mississippi) were quite impressive, and comedian/emcee Christopher James had the crowd with him the whole time.

In my estimation, Raiding the Country Vault is the best show in Branson. Playing all the country hits that I grew up on and continuing through to contemporary hits, this band is packed with truly superb musicians. Members of this band have toured with the likes of Waylon Jennings, Travis Tritt, Hank Williams Jr., Mel Tillis, Garth Brooks and Tanya Tucker.  Their performance appears effortless, no need to strain for a note – it comes naturally.

Getting the lay of the Land and the Lake

The amphibian tours at Ride the Ducks are a great way to get a feel for Branson, while learning a bit about the Ozarks and the Table Rock Dam. Furnished with duck bill quackers, used for occasional musical quack-alongs, riders are in for a pun-filled ride up Baird Mountain. The vista here is punctuated by soaring eagles and buzzards. Each trip includes a splash into Table Rock Lake, where kids and kids-at-heart, are offered a chance to drive the duck. The humor is corny and if riding with Captain Tater will include more potato puns than you could possibly imagine. So, be ready to blow your plastic quacker and join in the fun. 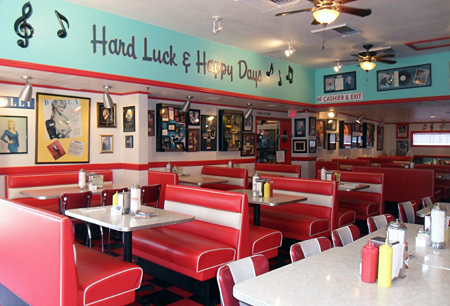 Gettin’ Basted is a newly opened BBQ restaurant in the Starlite Theatre (home to Raiding the Country Vault). Enjoy award winning brisket, pulled pork, chicken, sausage and ribs with an array of side options. McFarlain’s Family Restaurant, in the Branson IMAX Complex, offers Ozark home cooking, with an emphasis on pies, and a refreshing raspberry ice tea.

At Mel’s Hard Luck Diner the singing staff serves burgers, sandwiches, milkshakes and sundaes. Be aware, the portions are huge. Bring friends along with you to share Branson’s biggest banana split or the still larger Climb Every Mountainice Cream Avalanche – it can easily feed six or more!  Located in the Grand Village shops, Mel’s is just across from the Kringles Christmas Shop – the largest Christmas store in the Mid-West.

The Name on a Boarding Pass

Along Branson’s strip (otherwise known as Highway 76) you will see countless theaters, a giant chicken at the Great American Steak & Chicken House, King Kong atop the Hollywood Wax Museum and a huge ocean liner, or at least half of one at the Titanic Museum. The Ozarks are most definitely a strange place for a museum dedicated to a ship built in Belfast and sunk in the Northern Atlantic Ocean. But nonetheless, a visit to this museum should be on everyone’s Branson to do list. 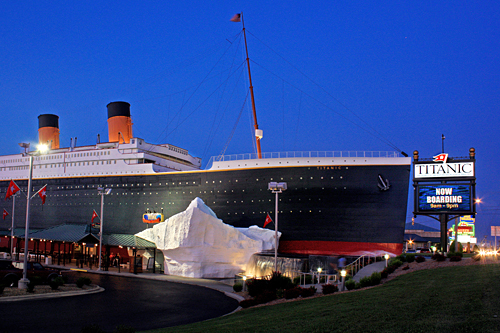 Upon entering the museum everyone is given a Boarding Pass, detailing the name of a passenger or crew member and a bit of information about this person who was aboard that fateful night in April 1912. Knowing that first class passengers statistically fared better, I immediately resigned myself to the most likely sorrowful fate of my 3rd class passenger from Northern Ireland.

Among the exhibits are replicas of first and third class cabins, and the iconic wooden grand staircase, made famous in James Cameron’s movie. The Father Browne gallery displays dozens of photos taken aboard the ship on the first leg of the voyage, from Southampton, England to Queenstown (Cobh) Ireland. Had Father Browne not disembarked in Ireland these captured moments would have also been lost to the sea. A touching gallery is devoted to the musicians that took it upon themselves to play during the ships frantic last hours.

Thanks to a “crew member” or audio guide, you will be regaled with the stories of actual passengers. With 2208 people aboard the ship the wealth of stories to be told is practically endless. The museum has over 400 priceless historical artifacts, including china, a life jacket, the only surviving bible, and a deck chair. There is a small thermos on display, not much to look at, that is, until you hear its story. A father was warming up milk for his young child when the rush to the lifeboats began. Upon seeing his wife and children into a boat, he rushed back to retrieve the baby’s warm milk. When he returned the lifeboat was already descending, so he climbed down the ropes and delivered the thermos. Then he climbed back up to wait with the other men on deck. The father did not survive, but this small tarnished thermos remains a testament to the loving father he was. 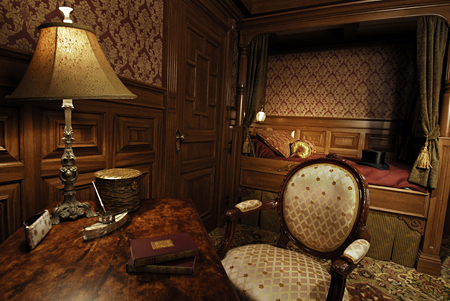 A replica of a first class suite aboard the Titanic.
Photo: Titanic Branson

The names of all the Titanic passengers and crew line the wall in one of the final rooms. The underlined names are the lucky survivors. After carry my boarding pass throughout each gallery, I have become surprisingly attached to my person. When talking with other visitors we all tend to personalize the pass, saying things like, “I’m traveling in second class,” “I’m a teenager” or “I’m a crew member”. Now we all get to find out “our” fate. With much surprise, I proclaim quite loudly, “I lived.”  Not all are so fortunate.  In the following room, small photos and a bit of post Titanic information is given for all those that survived.

The final interactive gallery includes a comprehensive display on the telegraph and a timed frigid water station. Place your hand in (-2°C) 28°F water (the same temperature of the water when Titanic sank) and see how long you can withstand the pain. Hypothermia sets in at 20 minutes, the time clock goes up to 3 minutes and the vast majority of those giving it a try last less than 15 seconds – it took almost 2 hours from the time Titanic slipped below the water until a rescue ship arrived.

From high above a shaft of light reveals the entrance to this damp, dark world. Hushed voices seem appropriate as a sense of reverence washes over me – how could it not? I am after all standing in what can best be described as nature’s cathedral. Large enough to hold the Statue of Liberty, this massive 20-story hollow has even held five hot air balloons. Formed by a sinkhole, this stunning chamber was the Branson area’s original tourist attraction. In 1894, Canadian William Lynch and his two daughters began operating cave tours. Over fifty years later the Herschend family took over operations, adding concrete stairs and a cable train exit. 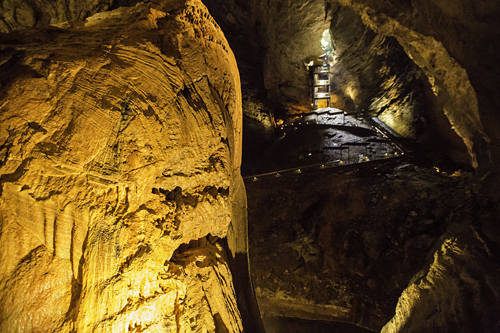 A National Natural Landmark, Marvel Cave has been
a popular attraction for over 100 years.
Photo: Silver Dollar City

A narrow winding path leads deeper into the cave. In contrast to the soaring ceiling of the cathedral room, the low ceiling now forces me to hunch over. In another smaller chamber, our guide Ed turns off all the lighting and by the glow of a single candle shows us how early mining hopefuls mistakenly confused a smooth limestone ceiling for profitable marble. Those miners still managed to reap a substantial fortune during the following years by “harvesting” tons of bat guano (used in fertilizer and gun powder) from the cave.

Further down a narrow set of stairs the pathway soon rewards our efforts by delivering us to a beautiful waterfall. Lit with slowly changing coloured lights, and accompanied by its own rushing water soundtrack, the scene is serene and mesmerizing. It is only the need to keep up with the group that ultimately forces me to move beyond its powerful pull.  At the lowest point visitors are standing some 500 feet below ground level. From here the climb up begins. Along the way up other small rooms reveal their wonders. In one Ed points out a tiny mouse-sized adult bat hanging from the ceiling. In another, the rock formations resemble frilly draperies. After climbing up about 200 steps it is time to say goodbye to this stunning nether realm and climb aboard the cable car that brings us back into the warm Missouri sun.

Silver Dollar City is an 1880’s mining town theme park. Built on the footprint of an actual mining town, the park sits atop Marvel Cave. The park was originally designed to entertain patrons of the cave while they waited to enter, but it quickly became the primary draw. Over 2 million people a year visit the 100-acre park, with its 40 plus rides and attractions, 12 stage venues, 12 restaurants, 60 shops and uniquely 100 craftsmen and women. 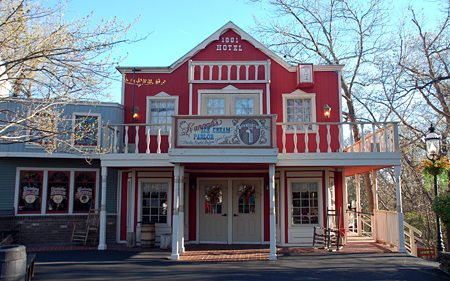 The wood carvers, blacksmiths, potters, glass blowers, knife makers, candle makers, leather crafters, furniture crafters and others add a wonderful extra dimension to the theme park. You could easily spend a day watching interesting demonstrations and chatting with these skilled craftsmen. George Stiverson, a master glass etcher, creates beautiful works of art on glass right before your eyes. Jeff Walker, a master potter, transforms lumps of clay into pitchers, cups and plates while explaining his work to attentive on lookers. While, June Ward, a master candy maker, showcases her firecracker personality with each batch of peanut brittle and fudge.

Thrill seekers will be overjoyed with an abundance of wild rides, including: PowderKeg, an explosive launch roller coaster; WildFire, a multi-looping roller coaster; and the Giant Swing, a pendulum-style ride that launches riders seven stories in the air. And to top it all off, the world’s steepest and second fastest wood roller coaster –Outlaw Run is the only wooden roller coaster to twist upside down with a record breaking three inversions.

When to visit: The vast majority of shows and sights run from March through to New Year’s.  Some big name stars come to town for limited engagements, as well. Before booking your trip double check the scheduling for the shows you want to see and then pick your dates. The crowds and traffic jams during summertime are notorious. While, fall time in the Ozarks can offer an additional beautiful and free live show – the foliage.
www.ExploreBranson.com

The Hiltons of Branson make a great home base when visiting, with indoor pools, business centers and good wifi. The Hilton Promenade is located at Branson Landing, beside Branson Landing Promenade shops and Lake Taneycomo, and the Hilton Convention Center is located just across the street – all in downtown Branson.
www.hiltonsofbranson.com