Which Montreal powerbroker convinced private investors to donate massively to the MUHC super hospital through years of political turmoil, fraudulent leadership and the pullout of key players?

John Rae, a man unafraid to laugh at himself.

“Nobody names their boys John anymore,” he said during a five-minute stand-up routine that helped raise $1.5 million for the new Shriners Hospital. “Happily the name John will not disappear entirely because it has been used over time to describe things. Excuse me; I want to go to the John. Are you going to wear long johns today?”

Rae’s sense of humour doesn’t prevent him from achieving serious goals. He spent decades as a key executive of Power Corporation and still serves the company in an advisory role. In his spare time, the 71-year old fundraising strategist helped Jean Chretien win majority governments in 1993, 1997, and 2000 prior to his work for the MUHC.

“I was privileged to work for a corporation that believed that officers should be involved in the community,” he said.

The Humour Me Montreal’s comedy show in which Rae and three other major donors participated exemplifies the kinds of fundraisers that formed part of the super hospital campaign.  The event took place on May 10, 2015, at Place des Art’s Théâtre Maisonneuve and raised funds specifically for the Shriners Hospital, the last building constructed in the project.

The Shriners Hospital wasn’t initially proposed by the MUHC in 1998. At first, the hospital was supposed to include five public entities—the Royal Victoria, Montreal General, Montreal Children’s, Montreal Neurological and the Montreal Chest hospitals.

Rae got involved in 2001. Then MUHC board chair David Culver asked him to lead the largest most ambitious campaign by the McGill University Health Centre (MUHC) to date. Over the fifteen years of the project, Rae’s team raised $300 million for an innovative public private partnership (known as PPP) development plan. 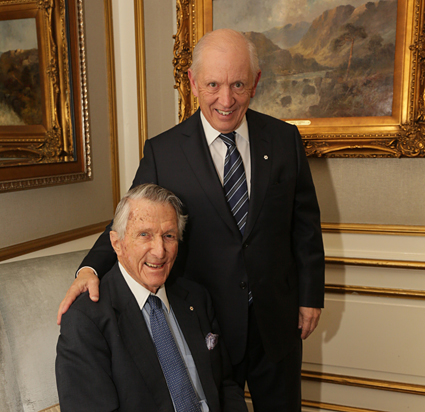 John Rae with the late David Culver (seated).
“Mr. Culver wanted this campaign to reflect the
Montreal of today and tomorrow, not of yesterday. David died in February 2017 at 92. His contribution should be highlighted.”

“Mr. Culver wanted this campaign to reflect the Montreal of today and tomorrow, not of yesterday,” said Rae. “David died in February 2017 at 92. His contribution should be highlighted. In Montreal, our health infrastructure had been neglected so there had to be involvement of all three levels of government. The Federal Government was involved because it gave a lot of money to the research institute. Over time, everybody came together and there was a massive investment in the two teaching hospitals and in a lot of other institutions besides. The provincial government, through many administrations, stayed committed. These reinvestments in our health infrastructure will be beneficial for our citizens for many years to come.”

Rae shared Culver’s vision and remained in charge of the capital campaign until 2015 when the super hospital opened.

“As a volunteer, there were three important lessons I learned throughout the course of this campaign,” said Rae. “First, believe profoundly in what you’re doing. Second, give your money and your time before you ask others to give their money and their time and third is that none of these important projects take place without significant difficulty and with lots of twists and turns.”

The project’s twists and turns began early. Rae started on a good note. The Quebec Government had just agreed to purchase the 17-hectare Glen property from Canadian Pacific Railway for $18 million and both parties agreed to pay to decontaminate the land. The MUHC was on track to meet its budgeted $1.2 million.

However by the time the campaign ended, that figure grew to $1.8 billion. There were even points during the fifteen-year adventure when it seemed the hospital might not be built.

“As we went through, from time to time, some difficulties, I used to like to remind myself of Winston Churchill’s quote, which was ‘make sure that when you’re going through hell you follow the most important principal never to stop.”

Soon after the land purchase, downtown Montreal residents complained that they would no longer have local hospital service. That led to public consultations, reports and a lot of criticism. By 2004, the concerns became acute and the Quebec Government asked the MUHC to keep one of its sites downtown. That request removed the Montreal General Hospital from the project, leaving a development hole.

Eventually the hole was filled by the Shriners Hospital-Canada, the only Canadian facility in a network of 22 privately-run children’s hospitals. That decision became tenuous twice. The board of the private hospital threatened to pull out of the project in 2006 when they heard that the MUHC-led decontamination of the property was incomplete. A year later, the board supported a motion that the Shriners move out of Montreal entirely. Rae encouraged the campaign to keep the Shriners here, which ultimately succeeded in July, 2007.

The entire concept of a public private partnership came up for debate politically too, particularly in the early days of the project.

“A project of this dimension was unprecedented in Quebec. In major undertakings things get complicated, but I didn’t have to argue too hard about why the infrastructure needed to be built. The community had conviction that it was doing the right thing.”

The most trying period for the McGill super hospital project came in 2011, when MUHC president Arthur Porter was accused of kickbacks and a year later, when he was charged with fraud. During that investigation, the public learned that the MUHC planned project deficit of $12 million had actually reached $115 million. As a frequent attendee and joint spokesman with Rae, Porters’ damaged reputation reflected badly on the hospital campaign.

Ask Rae about that now, and he doesn’t want to focus on it.

“It certainly created anxiety, but the project was more important than any incident,” he said. “We raised a lot of the money before we had a project that was confirmed. A project of this dimension was unprecedented in Quebec. In major undertakings things get complicated, but I didn’t have to argue too hard about why the infrastructure needed to be built. The community had conviction that it was doing the right thing.”

The final few years of the campaign featured imaginative events. On February 4, 2012, for example, ten MUHC doctors performed in a “Dancing with the Stars” type event at Metropolis to raise $203,000.

Fundraising stayed on track as construction finished at the site in late November 2014. Various hospitals then moved to the site throughout 2015, with the last one being the privately-funded Shriners.

Rae’s participation in the May comedy night that year combined with similar efforts by the many non-profit organizations involved to ensure that the Shriners opened at the Glen on October 5.

“Emphasize please that it’s not one person, it’s many who made this happen,” says Rae. “We live in a society that’s based on a real commitment to volunteer effort. The not-for-profit sector in Canada represents a great strength in our society. It’s been there from the beginning.”

Social entrepreneur and journalist Tracey Arial specializes in writing nonfiction profiles about local leaders like Rae, who donate their time and energy on behalf of the public good. Read more of her work in The Suburban or on her blog at www.notablenonfiction.com.