Dorothy Knowles: From Roots to Infinity exhibition and sale in Westmount

Born in Unity, Saskatchewan, on April 7, 1927, Dorothy Knowles grew up on a farm overlooking a prairie valley, a subject that was to become a recurring theme in her paintings. She had little contact with visual art until 1948 when, upon completion of her degree at the University of Saskatchewan, she decided to take a summer art class operated by the U of S at Emma Lake in northern Saskatchewan. The experience transformed her; she became hooked on art.

Both Dorothy and her husband Bill Perehudoff, a Saskatoon painter, began to attend Emma Lake Artists Workshops after they began in 1955. They sometimes attended separately when their children were young. During the late 1950s they both struggled to come to terms with the modernist painting that swept though North America after World War Two. The workshops offered contact with fellow artists and became a vital source of information about contemporary art. Their importance increased when American abstract painter Barnett Newman was engaged as a leader in 1959. Neither Dorothy nor Bill attended that year, but the Newman Workshop’s impact on Regina artists raised expectations. Leaders were sought among artists with international reputations. In 1962, Kenneth Lochhead (then head of the School of Art at Regina College and responsible for the workshop program) decided to invite a prominent art critic instead of a working painter.The critic was the American Clement Greenberg. Dorothy attended. The workshop transformed her approach to art. Surprisingly, Greenberg encouraged her to paint from nature rather than pursue abstraction.

Both she and her husband went to Emma Lake the following year. The leader in 1963 was Kenneth Noland, an abstract painter from Washington and New York. He commented to her that she didn’t have to paint with thick paint. His advice was contrary to the abstract expressionist tendency of the time. It struck home. Over the following winter Knowles started to paint with diluted oil paint, affecting the transparency of watercolour on canvas. It took a year to become accustomed to the new approach, but over the next two or three years she developed what was to become her signature style. 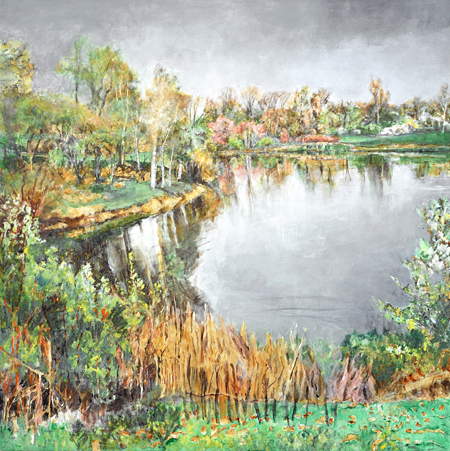 The style wasn’t just a matter of thinned down paint: the diluted oil paint interacted with a network of charcoal drawing. Her paintings resembled watercolours in a superficial sense. For one thing, many of them were painted on the scale of post-war abstraction. But they were also held together in a new way. Her unique charcoal drawing not only arranged the elements of landscape in space, but it also created a web-like network that held the picture surface together.

Curiously, the signature style that I’ve described wasn’t her only style. For the most part it was her way of painting in the studio. In the studio she didn’t work up sketches done from nature. Like many post-war landscape painters, she painted from colour slides as if she were painting from nature. Slides provided the luxury of being able to work and rework paintings over an extended period, especially in the winter months. Notwithstanding this practice, she worked prolifically from nature when weather permitted, using a van as a portable studio. She drew in charcoal and painted in watercolour and oil. Her oils – especially those from the 1980s – are remarkable in two respects: their size and painterliness. Many are 4 x 4 feet square, a size easily accommodated in the van. Many are painted thickly; in this respect they seem at an opposite pole to her studio paintings, although they do tend to exploit her light, airy palette. In addition to being remarkable physical accomplishments, these include outstanding works of art. Imagine Tom Thomson painting a work of similar size, like The Jack Pine, from nature in three hours!

Many of the studio paintings increased in size after 1978, when Knowles acquired a spacious studio in downtown Saskatoon. She took advantage of the large space to produce some very big paintings, some on the scale of portable murals. These include some of the most remarkable landscape paintings in Canadian art.

Above all, Dorothy Knowles is a productive painter. In sheer quantity of completed works, her output rivals that of her abstract painting contemporaries, many of whom work much more quickly. She goes about painting as a job of work, but that job draws upon a rare, intuitive capability. She has painted many paintings and among them are masterpieces of Canadian art. Recently a visitor suggested to her that five significant things are essential to a good life. She reflected on the comment and added: “I guess my five have been painting, painting, painting, painting, and painting.”

Terry Fenton was director of the Edmonton Art Gallery 1972-87 and the Mendel Art Gallery in Saskatoon 1992-97. He also served as artistic director of the Leighton Foundation in Calgary 1988-92. Throughout his museum career he organized many exhibitions of contemporary international and Canadian art in addition to writing on related subjects for international magazines. His published books include Modern Painting in Canada, Anthony Caro, Appreciating Noland, and Reta Summers Cowley.