Garland Jeffreys has been a successful recording and performing rock ‘n’ roll artist since 1969. He is a contemporary of the late Lou Reed, who he met while attending New York State’s Syracuse University. The two remained close friends until Reed’s death.

Garland’s career rebounded in 2011 with the release of King of In Between, which contained the hit single I’m Alive. Garland and I had a conversation before his last appearance at Club Soda, where he brought the house down with a terrific show that featured his dynamic showmanship; in addition to his crackerjack band of long-time musical friends. At the time, he told me that there are so many places to perform in greater New York City, he and the band work regularly.

Garland has a new album and we spoke just hours before he was to depart for the European segment of the tour that will bring him to Montreal’s Club Soda on May 5.

“My new album, 14 Steps To Harlem, is a tribute to my parents, and especially my father. He had a tremendous sense of responsibility, and always took care of his family. He put my brother and me first. We lived in Brooklyn, and he’d get up early everyday and take the subway train all the way up to Harlem where he worked in a factory.”

Garland credits his father for enabling him to earn a university education. “I don’t know how he got the money, but one day he told me that I had been accepted into Syracuse University and that I was going. He did the same thing for my brother.” In addition to getting an education, Garland made a musical friendship with Lou Reed that would last a lifetime, providing mutual musical inspiration. 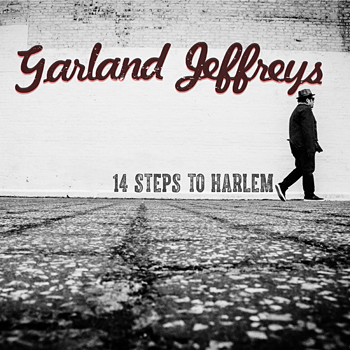 14 Steps To Harlem is a tribute to
Jeffreys’ parents

In the title song 14 Steps To Harlem, Garland writes lovingly of his father; “Daddy take the train…. When I go to sleep at night he tells me to say a prayer…” The album contains a haunting version of The Beatles Help, where even at 74 years old, Garland hits the high notes right on. “I met John Lennon at The Record Plant here in New York, through a recording producer Roy Socala who helped me tremendously.”

14 Steps To Harlem is a strong album that has garnered praise from Rolling Stone and Billboard. Adding to his already impressive body of work, the upcoming show promises to be a celebration of an artist who has earned the respect of his peer musicians, including Bruce Springsteen and many other rock ‘n’ roll living legends.