Does immigrating make you a better writer?

It might, if you write in a different language, says Xue Yiwei (pronounced shay yiway), the first Chinese winner of the Blue Metropolis Literary Diversity Prize and someone who has lived in Montreal since 2002.

“I like Montreal,” he said. “I became so productive, especially in Chinese. I publish a lot in Chinese. I still concentrate on literature. In China, it’s not easy. It’s a frantic country. Everybody just rushes to make money. I feel so proud to be here in a quiet environment to be able to concentrate on literature. I spend most of my time writing and reading and I spend some time doing exercise. Every winter, almost every day, I skate on the top of the mountain.” 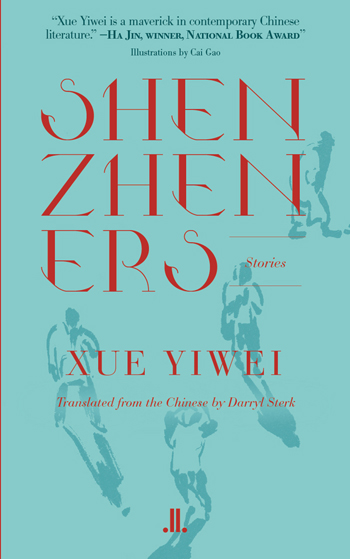 Yiwei got the award for Shezheners, a collection of short stories about living in a rapidly-changing Chinese city.

Linda Leith Publishing brought out the English translation of the work last autumn. Yiwei says that the first hundred copies flew off the shelf and it has since been selling very well. It’s now being translated in French for release sometime next year.

He heard about his award, which comes with a $3,000 payment, last month. He says the news is expected to bring even more attention to his work in China.

“The major newspaper in Shanghai is waiting for good news,” said Yiwei, shortly after finding out he won the $3,000 prize last month. “Montreal and Shanghai are twin cities and the original version of this book was first published there, so they’re very excited. Usually, the Chinese media don’t pay attention to these mainstream festivals, but they are this time.”

There may even be Chinese media at the official prize presentation, which will take place during the festival on April 29 at 7 p.m. at Hotel 10. After the presentation of his award, local writer Taras Grescoe will interview Yiwei about his work and its relation to his hero James Joyce. The 90 minute presentation is free.

Yiwei will also join a panel discussion about China in the 21st Century with Alexandre Trudeau (Barbarian Lost) and Michèle Plomer (Drogonville). That event also takes place at Hotel 10 on Friday, April 28 at 8:30 p.m. Admission costs $10.

He even has a chance to read his work in the original Chinese during the Babel Blue Readings on Thursday, April 27 at 4:30 p.m. Anita Desai (German, Bengali, Urdu or Hindi), George Elliott Clark (English), Marcello Fois (Italian), Pierre Nepveu (French), Josip Novakovich (Croatian) and Gillian Sze (English) will also be reading from their works. Admission for the session is free.

The entire Blue Metropolis experience is new for the 52-year-old Yiwei, who first saw information about the festival when he moved to Montreal in 2002.

“I went to a library and saw that there was something going on and I said in my mind ‘I’m going to be in that book.’ Fifteen years later, it has come true.”

Yiwei’s second work to be published in English will be Dr. Bethune’s Children, which will come out next autumn. Published in Taiwan in 2011, the work is still banned in China, although Yiwei says there have been reviews within the country, so he knows people are reading it.

You’ll probably be able to hear more about that work during Linda Leith’s publishing launch at 6 p.m. on Friday, April 28. Admission is free.

Check out all of the Festival’s 2017 events at www.bluemetropolis.org.