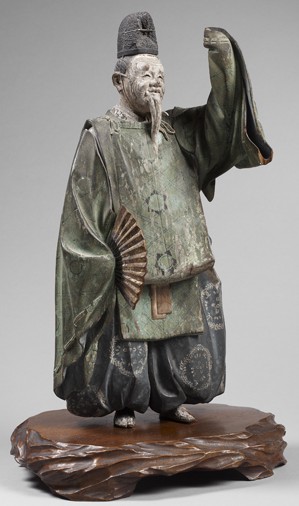 From the Lands of Asia

In a world premiere, From the Lands of Asia, The Sam and Myrna Myers Collection is on exhibit at Pointe-à-Callière, the Montreal Archaeology and History Complex until March 19, 2017. Some 450 exceptional objects will offer an uncommon perspective of the vast sweep of East Asian history.

Part of a larger collection of some 5,000 works of Asian art, including one of the world’s most extensive private collections of ancient jade, the exhibition also includes a selection of pieces from classical antiquity, ivories, impressive Buddhist icons, porcelain, and silks.

“The Sam and Myrna Myers Collection is a wonderful opportunity to experience some faraway places,” explains Pointe-à-Callière’s executive director, Francine Lelièvre. “It’s a real privilege to have access to such a collection, filled with rare and precious objects, right here in Montréal.”

“I often say that the mere sight of a wonderful work of art thrills me, and it is with this intrinsic passion that Myrna and I built our collection,” relates Sam Myers. “I want to thank Madam Lelièvre and her team for choosing to present it in Montreal for the first time and for providing this special look at Asian culture in all its wealth and variety.”

From the Lands of Asia invites visitors on a journey to faraway lands steeped in mystery and beauty – with a series of stops from the Central Asian steppes to the shores of the Pacific and the Sea of Japan. The exhibition also takes visitors on a trip through time, from the first Buddhists of Central Asia in the Neolithic period to the dawn of the modern age. 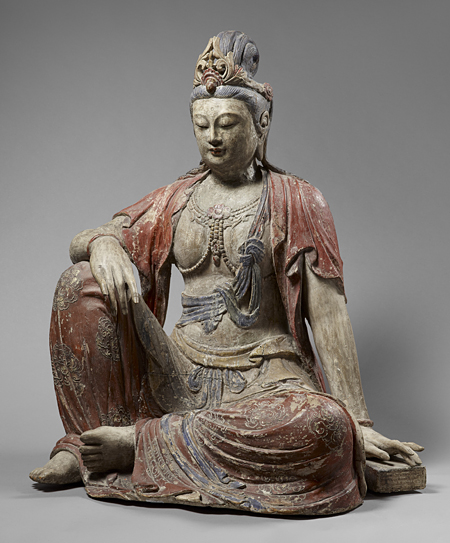 Bodhisattva
This divinity is associated with compassion and mercy. Artists from this time were expressing the body’s sensuality while at the same time renouncing worldly things.
Polychromed wood, China, Song dynasty, circa 1125
Sam and Myrna Myers Collection
Photo: Thierry Ollivier

In the middle of a jade gallery, a captivating set of imperial Chinese armour adorned with golden dragons sets the exotic tone. This is where we meet the Myers, an American couple who decided to move to Paris in 1966 and lived there for over 50 years. But their collection actually got its start when they purchased four Tanagra heads dating from the 6th or 5th century BCE from an antiquities dealer in Ascona, Switzerland. The Myers were surprised they were able to purchase authentic antiquities. Something clicked, and they soon developed a passion for collecting.Visitors will admire the Myers’ initial discoveries, which at the time focused on classical antiquity. But the couple’s tastes gradually evolved, and they became irresistibly drawn to East Asia, with its jades, porcelains, and silks.

The magic of jade

A rare and mysterious material, jade is regarded in China as the most precious of stones. Visitors are taken to the Neolithic period, where they can contemplate ceremonial weapons and insignia, and objects signifying the wearer’s social status. For example, the enigmatic bi disc may have been used as a funerary object to guide the spirit of the deceased to heaven. Or the mysterious cong cylinder, which is said to symbolize the earth and have religious and ritual significance.

Other jade pieces attract attention not only because of their beauty but also because of the special powers and magical properties the Chinese ascribe to them. For instance, ornamental pieces in the shapes of animals, including dragons – those mythical creatures that intermediate between heaven and earth. Visitors can also admire pendants and a magnificent funeral jacket made up of jade plates, a garment of immortality created during the Han dynasty (206 BCE to 220 CE). 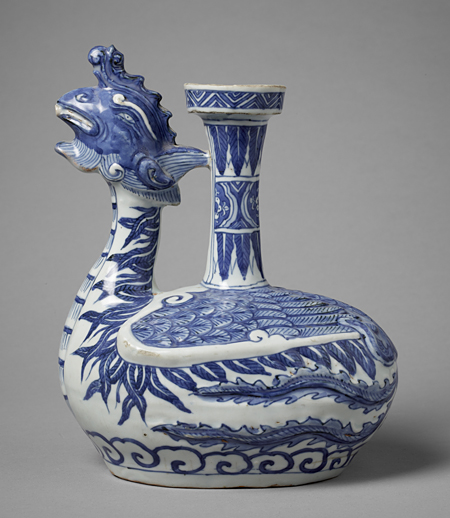 Kendi in the form of a phoenix
This phoenix kendi is especially remarkable because it is a rare combination of function and mystery, a kind of hybrid beast for which China has been known since Antiquity.
China, Ming dynasty (1368-1644), 16th century
Sam and Myrna Myers Collection
Photo: Thierry Ollivier

A thousand years of Buddhism

Continuing their exotic adventure, visitors travel down a cave-like tunnel, emerging into the Buddhist millennium. This part of the exhibition goes back to the origins of Buddhism in Northern India, and visitors follow the religion’s spread through China, Tibet, Korea, and Japan. Along the way, they will remark how Buddhism and Buddhist objects adapted to different local cultures and beliefs, creating a heritage of unique splendour.Buddhas, bodhisattvas, and other divinities attest to the significance of this movement, at once a religion, a wisdom, and a philosophy. Among the key objects in this space is the marble lion, which expresses the Buddha’s teaching, likened to a roar able to awaken the world.

An ocean of porcelain

The exhibition next changes direction, immersing visitors in the world of porcelain. Visitors learn that by the 16th century, many Asian goods were being exported to Europe, including porcelain, which, because of its weight, could only be sent by ship. In 1530 alone, between 40,000 and 60,000 pieces arrived in Portugal. By the 17th century, the Dutch were dominating the trade, building a powerful maritime and commercial empire in the East Indies.

But as the illustrations in this section show, sea voyages could be extremely perilous. Underwater archaeological excavations have recovered numerous treasures from the wrecks of cargo ships and junks. A remarkable testament to 500 years of porcelain production, this collection displays some of the most precious of these finds, which, despite centuries at the bottom of the ocean, have lost none of their lustre. 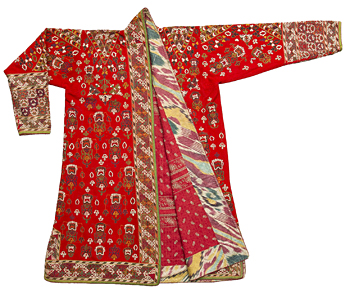 Lastly, visitors are wrapped up in the world of textiles. Costumes from the 16th to the 19th centuries in the Myers Collection prove to be an inexhaustible source of knowledge about the customs and know-how of many societies.

In China, silk fabrics reflected the wearers’ wealth and social status. At court, for example, the colour and decorations of dress changed from dynasty to dynasty. In this colourful, silk-filled space, we are introduced to key characters, including the scholar, whom we learn about through a robe – a rare complete example of a garment of this type – and through accessories such as inkstones, which these experts in writing would retain for their entire lives. From Japan, we discover the kimono, considered by some to be the most elegant garment in the world. We also cross paths with the samurai and their clothing adapted for wearing armour. Also in Japan, we learn about the Noh theatre, with its actors dressed in sumptuous silk costumes. And we imagine the lives of Uzbek merchants and riders crisscrossing the steppes, clad in flamboyantly colourful garments that take our breath away. A brilliant finale to this journey to East Asia through the works of the Sam and Myrna Myers Collection.