“Steep yourself in a healthy dose of holiday cheer with Candlelight Christmas”
– Montreal Rampage, 2015

The Lyric Theatre Singers’ return to Concordia University’s beautiful Loyola Chapel, located at 7141 Sherbrooke Street West. From December 1 to 3 they will give four performances of Candlelight Christmas 2016, their highly anticipated annual holiday concert. An additional treat this year is the special guest appearance by the English Montreal School Board Chorale Youth Choir, under the direction of Patricia Abbott, for one night only on December 1st. The EMSB Choir will perform selections from their own Christmas repertoire as well as lend their voices to a few Lyric Theatre Singers highlights, a collaboration that promises to be as heartwarming as it will be entertaining.

Santa Claus is Coming to Town 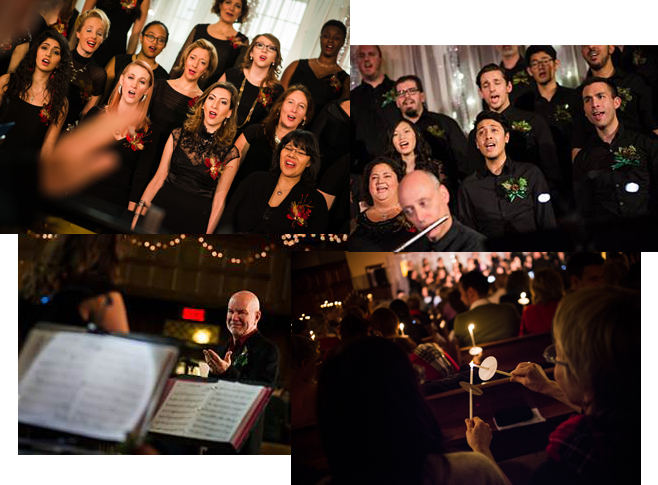 Ms. Abbott, currently in her 27th year leading the EMSB Choir, is a frequent Juno Award jury member and helms several musical organizations including the Cantivo Chamber Choir and Les Voix du Carrefour. She has received several awards for her contributions to music including the Quebec choral federation’s Ordre du mérite choral and the Queen Elizabeth II Diamond Jubilee Medal. “I’ve known Patricia for over 25 years and am thrilled to share the stage with her and the EMSB Choir this year”, admitted Bachelor. “I deeply admire her dedication to fostering the love of music in people of all ages. We can’t wait to kick off the holiday festivities and share the spirit of the season!”

The EMSB Chorale, made up of students grades 6 through 11, is a winner of numerous awards at the Montreal ARCIM Choral Festival (l’Alliance régionale des Chorales de l’Île de Montréal) and has twice been a national finalist in the CBC Competition for Amateur Choirs. The renowned ensemble has sung in every major concert venue in Montreal in addition to participating in many special events in and around the city. A frequent guest artist with other music ensembles, the choir has also toured throughout Canada as well as to the United States and Europe. From 2002 to 2014 it could be heard regularly on CBC Radio One and Two in the CBC/McGill concert broadcasts.

About The Lyric Theatre
The Lyric Theatre is a long-standing producer and promoter of musical theatre in the Montreal area. What began in 1965 with a vision of a community based group presenting an annual stage production on the West Island has, thanks to the creation of The Lyric Theatre Singers in 1990, grown into a company of performers of all ages from several areas of the city. The Singers rehearse and perform 10 months out of every year, presenting their annual Broadway revues and sold-out Christmas concerts.

As in previous years, donations of non-perishable goods are gratefully accepted for the NDG Food Depot.