For the complete schedule of all FMA events visit: www.festivalarabe.com 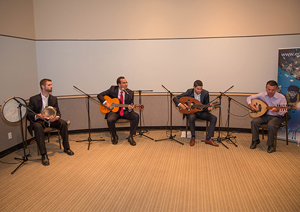 A promising young group, the Ouditar quartet takes up a popular repertory and invites us into its world that connects Eastern and Western inspirations. New arrangements or reinterpretations create a bridge between cultures that illustrate the gathering of these musicians around a common project.
Free Event. 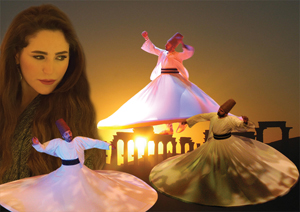 ABEER NEHME accompanied by OKTOECHO ensemble
With the participation of the WHIRLING DERVISHES OF ALEPPO
(Lebanon, Syria, Quebec, Ontario)

In a truly fascinating musical odyssey to the heart of the countries of the Levant, called Bilad El Cham or Greater Syria in an earlier era, the opening evening of the FMA explores the gems of a heritage that is now threatened with disappearance. Drawing on the symbolism of the mythical city of Palmyra, located in the heart of a Syria that is being burnt alive, the 17th Arab World Festival pays tribute to the vast musical and cultural heritage of that part of the world, bearing the mark of the passage of civilizations, ethnicities, languages and religions, both rich and diverse.

Abeer Nehmé, an outstanding singer and composer who has pursued an unusual career, illustrates perfectly the diversity and harmony of this Levantine rainbow. With a passion for world music and sacred chant, she embraces the Aramaean, Syriac, Gregorian, Byzantine, Sufi, Armenian, Kurdish and Persian vocal heritage and delves tirelessly into the ancestral roots of a plural Arab civilization. With a “voice of golden nuggets” (L’Orient-Le Jour), ethereal, enchanting and timeless, Abeer excels in the art of performing both the sacred and profane repertory and juggles with disconcerting ease between traditional “tarab”, ancient songs and opera in more than 18 languages!

Lebanese by origin but a citizen of the world, Abeer Nehmé has set foot on the most prestigious stages in both East and West. In her first Canadian appearance, accompanied by the OktoEcho ensemble, she offers us pure vocal and musical delights in which Christian hymns dialogue with Sufi chants, Muashahat from Andalusia and Qudud from Aleppo converse with Armenian, Greek or Turkish melodies… A crescendo of excitement that reaches ecstasy, carried by the infinite spinning of the sublime whirling dervishes.

Divine Palmyra is an invitation to a timeless overview of a land of a thousand and one facets, a return to earlier roots so as to dream, in these dark times, of a dawn that proclaims renewal and life! 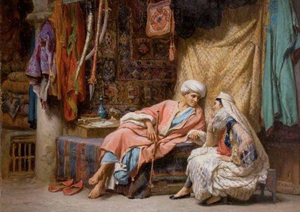 Wallada & Zeydoun
Outrageousness of a love
October 29, 6:45 pm – Espace Georges-Emile Lapalme, Place des Arts
With the participation of Mohand Silali
Ibn Zeydoun, a master poet of qasida (a poetic form) in the Andalusian era, was the remarkable lover of Princess Wallada of the Umayyade Caliphate. Through a series of poems by Ibn Zeydoun and Wallada, a storyteller and musicians from the pure Andalusian tradition celebrate the passion-filled story of a forbidden love.
Free event. 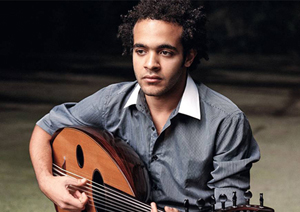 At age 23, he is established [by his music] among the great musicians of our time. (Les Inrocks)

Picked as the “top oud player in the Arab world”, Mohamed Abozekry will dazzle the Montreal audience for the first time! A disciple of Iraqi oud master Naseer Shamma, Mohamed Abozekry quickly emerged as a young prodigy of this instrument: soon after reaching age 15, he earned a diploma with an award of excellence as a soloist from the “Arab Oud House” in Cairo and became the youngest oud teacher in the Arab world.

After mastering the repertory of classic and contemporary Arab music, Mohamed began, through various encounters, to develop his own style, blending Oriental music with jazz, blues and rock influences. He headed later on to France and created his Heejaz project, a quartet spanning Oriental music, jazz and world music.

His achievements include two propitious albums of rich and sumptuous compositions, at the crossroads of Arab-Andalusian influences, Middle-Eastern melodies, jazz and rock, along with Latin, Gypsy and Indian musical styles. This young virtuoso whom no barrier of style or genre seems to hold back “succeeds with insane insolence in carrying his outsize technique along paths that are supposedly inaccessible to the oud” (Les Inrocks)

A world music revelation, oud virtuoso and inventive composer, Mohamed Abozekry, accompanied by French and Montreal musicians, holds out the promise of an intoxicating, sensational and deeply moving concert. 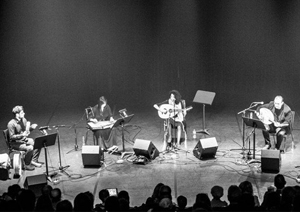 With the Ensemble Zaman, Lamia Yared brings us to the heart of the musical traditions of Aleppo in the Ottoman era, where rich and varied genres and styles proliferated – Sufi, Turkish, Syriac, Byzantine, Andalusian – brought together in one city: Aleppo! Bearing the imprint of all the civilizations that marked this mythical city, the program will elucidate instrumental compositions and vocal pieces written by great composers of the era. 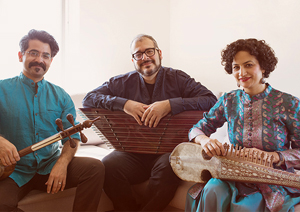 In the eclectic musical universe of Ensemble Kamaan, borders are abolished to make way for a bewitching alchemy through the mystical conversation between Amir Amiri’s santur, Showan Tavakol’s kamancheh and Behnaz Sohrabi’s rabab. Drawing on the diversity of Persian melodies, these three virtuosi venture into innovative territory, aspiring to universal connection.

It is in this perspective that they invite whirling dervish Tanya Evanson into this project, Paths that lead everywhere. Through the trance of her whirling, Tanya Evanson traces the paths that lead to the Divine. Performing the ritual of rotation to become aligned with cosmic motion, a dervish (literally “doorway”) is an entrance from the material world to the spiritual world, a connection between the two worlds.

To the sound of finely ornamented music, reviving a Persian culture, the whirling of the dervish will be accompanied by a series of photographs of doors and windows, opened and closed, taken in the Iranian countryside. 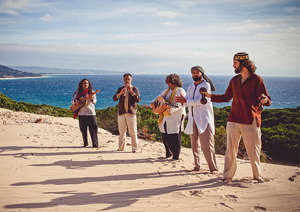 La Banda Morisca (the Moorish band) was, in the Middle Ages, the fluctuating boundary that separated the Arab-Andalusian kingdom of Granada from the Christian kingdoms of Aragon. It was probably in this no man’s land that traders, nomads as well as Christian and Muslim fugitives came across one another and cohabited, along with the first Gypsies who arrived on the Iberian Peninsula, through whom flamenco music emerged.

La Banda Morisca is a flamenco and Arab-Andalusian septet originating in the rich musical soil formed by the many civilizations that crossed this land overflowing with musicians, poets and adventurers. Consisting of musicians from diverse origins, some of whom were part of the famous group Radio Tarifa, the group’s members have come together and collaborated around an original repertory, centred around the cultural heritage bequeathed by the civilization of Al-Andalus.

In its approach, the group offers a new vision of a repertory that blends eastern and western influences from the Mediterranean (moaxajas, chaâbi, Dahmane el Harachi, Nass el Ghiwan) with the traditional flamenco spirit and Andalusian rock (El Chozas, Lole y Manuel, Triana).

15% off for students and seniors (available only at the door with a valid ID)
For more information and tickets: www.festivalarabe.com