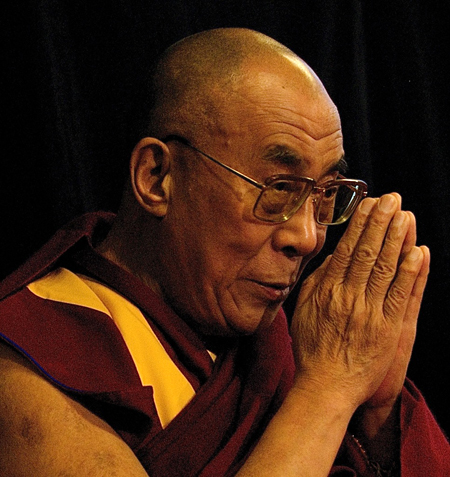 “The planet does not need more successful people. The planet desperately needs more peacemakers, healers, restorers, storytellers and lovers of all kinds.”

What does the word ‘peace’ mean to you? World Peace. Inner peace. Peace of mind. The calm before or after a storm. Perhaps simply the absence of war.

Wednesday, September 21 is the UN International Day of Peace. Here in Montreal there are several major activities taking place not only on that day but also over the course of the month – including the opportunity to visit the Peace Centre and Garden at Dawson College (September 13), meet several Syrian refugees (September 19), and/or attend the Annual YMCA Peace Medals Gala Dinner (September 21).

Working in partnership with the City of Montreal the Brian Bronfman Family Foundation (BBFF) is again coordinating many of these events. One of Bronfman’s personal commitments? On Sunday, September 25, he will run his first half-marathon to raise funds for the Montreal Holocaust Memorial Centre.

“Peace is about creating harmony by fostering healthy relationships to cope with adversity,” says Bronfman. “It is about building bridges and celebrating diversity. We work with donors, sponsors, charities, grass-root NGOs {Non-Government Organizations), family foundations, and local community groups who care about peace as much as we do.” 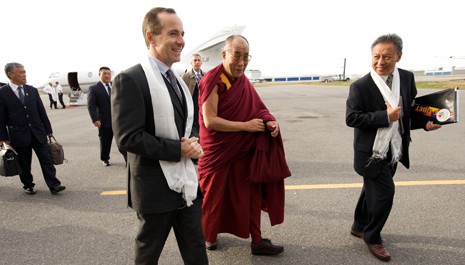 Brian Bronfman is a natural-born peacemaker. When he started the BBFF in 2006, following the death of his father, Edward, he was well positioned to focus on peace having studied philosophy, law, the environment and worked in both mediation and conflict resolution.

While his choice may not have seemed particularly relevant to Canada at the time Bronfman clearly had his work cut out for him moving forward. The Top Ten news stories from 2006 include: the Iraq War, Disaster in Darfur, Israel-Hezbollah Conflict, North Korea Nuclear Threat, and the Danish Cartoons Satirizing Mohammed. Who knew that a decade later fallout related directly to the refugee crisis would land on our own front door step?

“Canada excels at international diplomacy, whether as a peacekeeper, a facilitator, a mediator or influencer, as it has shown in the case of accepting Syrian refugees,” notes Bronfman. 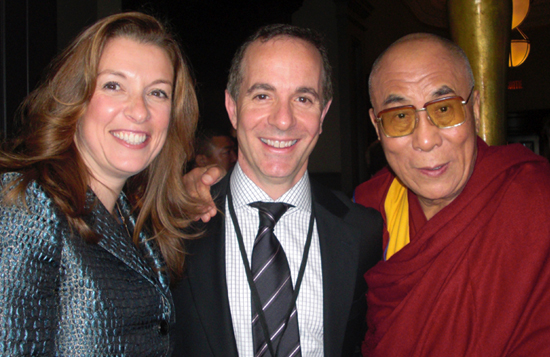 Bronfman is also a peace builder. Partnering with his wife, Marcia Wetherup, who had studied psychology, criminology, and is a champion of human rights, the couple was ideally suited to begin the immense task of inter-cultural bridge building. Together they launched the Peace Grantmakers Network (PGN) in 2009 focusing on Applied Peace – specifically, programs that promote empathy, greater acceptance of diversity, and emotional intelligence with the intent of resolving conflict in a peaceful, measurable way.

“Initially, people thought we were about supporting peace in the Middle East,” recalled Bronfman. “What we are about is violence prevention and providing opportunities to empower people. We are definitely looking for practical, concrete solutions. We do avoid anything that is merely symbolic or overtly political.”

Three months prior to starting PGN Bronfman volunteered to help coordinate the Dalai Lama’s 2009 visit to Montreal. While the stay included a public talk at the Bell Center on The Power of Compassion the Dalai Lama also met with over 500 teachers chosen to implement Quebec’s new Ethics and Religious Culture program.

“I consider the Dalai Lama to be the most widely respected voice on peace today,” relayed Bronfman. “He is truly a man of compassion. When he touched me on my back as we were walking I could feel the warmth from his hand.”

In the decade since it started the BBFF has exceeded its own expectation. In that time it has provided seed money to Dawson College that led to the creation of the Dawson Peace Centre; seed funding for the PLATFORME project, a collaboration between the University of Sherbrooke, the Canadian Institute for Conflict Resolution, and the Quebec Human Rights Commission focused on developing intercultural mediators and dialogue facilitators; made a multi-year commitment to the Romeo Dallaire Child Soldiers Initiative, with a special emphasis on prevention; is a financial supporter of PREVNet, Canada’s leading bullying and violence prevention network; has funded community programs such as Youth Fusion’s CREE anti-bullying initiative, the Hagar School‘s Jewish-Arab education for equality program, as well as LOVE (Leave Out Violence);  funds two courses at McGill University’s School of Religious Studies to promote interfaith dialogue; recently hired an inter-cultural specialist for Camp Cosmos, a children’s inner-city camp, many of them Syrian refugees; supports ICAN, the International Community Action Network which teaches social advocacy skills to students from Israel, Palestine and Jordan; and in 2017 it will partner with both Concordia University’s MIGS program (Institute on Genocide and Human Rights Studies) as well as the Montreal Museum of Fine Arts Peace Pavilion to expand its reach.

“Concordia, along with the MMFA, will join with Dawson College Peace Centre and Quebec’s YMCA’s, two organizations we are already working with, to be the founding partners in our new Montreal, City of Peace initiative,”explains Bronfman. “The program will be fully functional in time for the city’s 375th anniversary.” 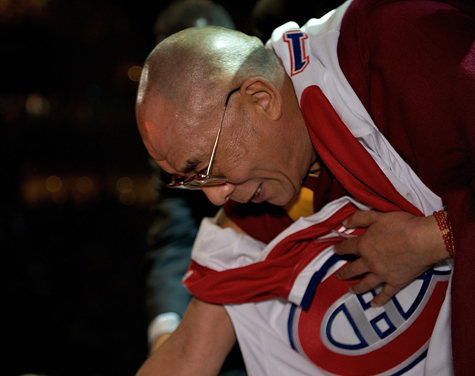 In 2014 PGN played a major role in educating teachers and school administrators after Quebec’s Law 19, the province’s anti-bullying initiative, came into effect requiring schools to implement a detailed anti-bullying plan with clear prevention policies as well as protocols for handling bullying incidents. The law also made it mandatory that parents be informed of each bullying incident. The first symposium (Social Emotional Learning & Bullying Prevention) was held in February 2014; the second (Effective Tools to Prevent Bullying) in November 2014. One major change: dated Zero Tolerance policies, which simply suppressed the problem and did nothing to address the underlying issues, were eliminated.

“In the exit survey we conducted 80 percent of those who responded told us they had learned something new about bullying that they felt they could use in class the next day,” says Bronfman. “That was very rewarding for us.”

“This program has not only reduced the incidence of bullying in the school but also improved the way they are handled.”

Bronfman believes that violence of any kind is “an inappropriate response.” He values respect, tolerance, and collaboration over conflict, which is why you will probably never find him marching in the streets of Montreal for any cause other than peace. Asked what was the tipping point for him personally he says it was when his child was born twelve years ago. 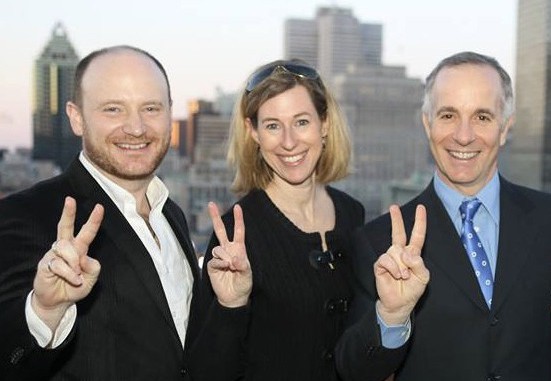 “I knew then, as a father, a son and a professional that I had to at least try and make a difference.

While his own father, Edward Bronfman was awarded the Order of Canada for his life-long philanthropic efforts (i.e. the Canadian Jewish Congress, the Canadian Council of Christians and Jews, Canadian Psychiatric Research Foundation), Brian’s goal is to make peace a widely recognized area of study and a better-supported area of philanthropy.

“Even though peace is a widely-shared value among Canadians, and despite there being many worthwhile grass-root peace initiatives in Canada, peace as a profession remains underdeveloped.”

When the Foundation started a decade ago its early supporters joined mainly because of their personal relationship with Bronfman.

“Now, our newest members have joined based purely on our vision, our values and the quality of our work,” relates Bronfman. “This includes a dozen foundations, such as the Simple Plan Foundation, the McConnell Foundation, the Canadian Women’s Foundation, as well as our three corporate members – Richter, Fiera Capital and RBC. When they have asked us what they can do to help we have said we would like them to walk shoulder-to-shoulder with us on this road to peace.”

Interested in attending or donating to the YMCA’s Annual Peace Medals Gala Dinner on Wednesday, September 21, 5:30 to 10 pm? Profits from the dinner will provide the opportunity for youth to participate in YMCA peace-related programs to learn how to make the right choices, resist peer pressure, resolve conflicts, as well as embrace diversity.
Contact: Chantal Mallett 514-849-5331, ext 1297 or email: [email protected]