I was recently invited to visit Le Méridien Versailles and check out its new look. Starwood Hotels & Resorts Worldwide was unveiling a comprehensive renovation of the intimate 108-downtown Montreal guestroom hotel, including two penthouse suites and  the debut of the signature Le Méridien Hub and all new meeting and public spaces within the facility.

Conveniently located at the corner of Sherbrooke Street West and St. Mathieu, Le Méridien Versailles has been transformed with an engaging and expanded lobby environment. Le Méridien Hub is actually an innovative reinterpretation of the traditional hotel lobby into a social gathering place. It features innovative coffee and cocktail programming and stunning arrival art installations, turning the hotel’s lobby into the newest gathering spot for locals and visitors alike.

Le Méridien Versailles also is home to Branzino Restaurant, where executive chef, Alexandre St-Amand-Tremblay offers gourmet Mediterranean-inspired cuisine for breakfast, lunch and dinner. I was very intrigued by this dining establishment, which opened in August 2014. The menus enticed me enough to dine there recently with my friend Sam and our experience was nothing less than outstanding 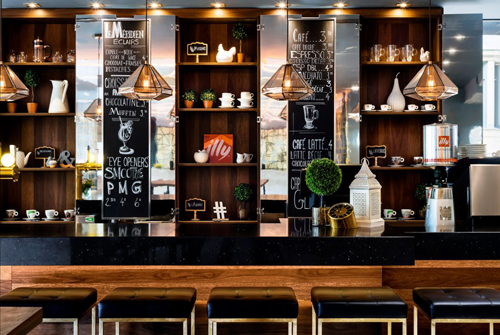 While most of the hotel guests take advantage of the breakfast menu, this also becoming a popular spot for business meetings first thing in the morning. The same can be said for lunch, where the selections change every Tuesday. That is when Sam and I dropped by. First of all, let me say that this is probably one of the best value for your dollar lunches in the city. For only $22 per person you have a choice of soup, salad or an appetizer, a main course, dessert and coffee. We were served by both the day manager Noelle and her colleague Grace. They took great care in describing all of the different choices.

The restaurant has a very large selection of cocktails and wine. I decided to start off with a lemon blast, consisting of prosecco, lemon juice, mint and some other flavorful ingredients.  Sam and I both opted for the spring salad, which came complete with a variety of vegetables and a fabulous balsamic vinaigrette dressing.

Sam ordered the Branzino Burger, made with AAA beef, cheese, smoked meat, lettuce, tomato and some spicy mayo on the side. It came with crispy French Fries. Sam asked for some sliced onions to complement his dish and he was very pleased with his decision. The burger was cooked just right. 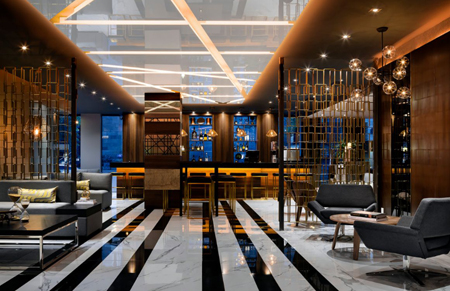 I have always been a fan of schnitzel and let me say the chef really outdid himself with my piece, which was thin and crispy. It came with some spring potatoes.

For dessert Sam had the chocolate prism, a piece of soft and out of this world mousse with a crispy outside layer. I decided to try the raspberry cake, which came with a layer of jello-like raspberry at the top and vanilla in the slices. Both cakes came with some whipped cream on the side.

Pierre-François Healey-Côté, the manager of this very trendy looking restaurant, says that they can accommodate 80 diners and 25 on the seasonal terrace.

I look forward to returning to Branzino for dinner, where the selections include starters like sweet potato gnocchi, grilled octopus, seared scallop, white tuna taki and main courses such as  beef short ribs, grilled Atlantic salmon, a catch of the day, wild mushroom risotto, filet mignon, half duck breast and a whole Branzino (European sea bass).  There is also a tasting menu, where for $65 you have six services to choose from and for $42, there are three services.

You can view the full menu at www.branzino.ca  the address is 1800 Sherbrooke Street West and you can call 514-904-1900 for reservations. Lunch is not served on weekends.

Getting back to the hotel, the rooms feature new Le Méridien beds, furniture, custom-designed wallpaper, comfortable and functional seating, accent lighting, mirrors and luxe carpeting. Guest rooms include new 32 inch flat screen televisions, plug and play docking stations and an enhanced wireless Internet platform. Renovations include the addition of low-flow toilets, showerheads and faucets in the bathrooms, reducing water consumption throughout the building.

All public corridors and hallways throughout the hotel feature new flooring and wall finishes.

Le Méridien Versailles is ideally located in the heart of the Golden Square Mile, just steps away from the best shopping, venues and attractions in Montréal. In a nod to Le Meridien’s Parisian roots, the hotel has partnered with Priority Bicycles to deliver a uniquely active way for guests to explore the city. Stylish bicycles are available for rent from the front desk, on a complimentary basis to Starwood Preferred Guest (SPG) members. And yes, the hotel offers more than 3,000 square feet of newly renovated meeting space and a newly renovated fitness centre . You can learn more at  www.lemeridienversailleshotel.com.