At the Rio Tinto Alcan Planetarium

Since the dawn of humankind, we have stared up into the night sky and pondered its endless mysteries. The ancients played connect-the-dots with the stars and named the constellations after the pictures they drew. Copernicus and Kepler helped us understand our solar system and through his telescope Galileo brought it closer to us. In the last century, we have sent space probes beyond our solar system’s furthest planet, left footprints on the surface of the moon, and landed rovers on Mars. Now, a new double feature at the Rio Tinto Alcan Planetarium takes us on “a road trip” to Mars and an extreme mission aboard an asteroid.

“These two fabulous multimedia shows will whisk audiences off to the universe of the possible, to the farthest reaches of the cosmos,” says Montreal Space for Life Director Charles-Mathieu Brunelle.

One Day… On Mars

Following a live commentary introduction to our night sky, the Montreal Space for Life produced multimedia show begins. Using authentic pictures, precise data and specialized software, scientific data is transformed into cinema and we are transported to Mars. The soundtrack for our travels is an original musical score by Quebec musician Dumas. 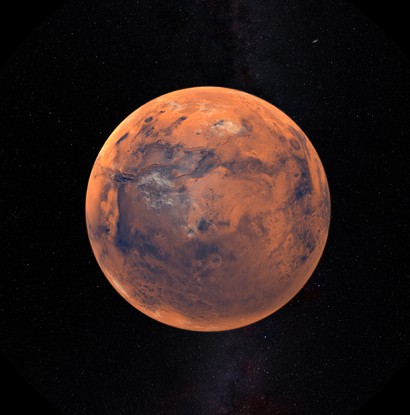 The Red planet, about half the size of earth, is home to extraordinary dramatic landscapes and violent sand storms that grow big enough to envelop the entire planet. These storms are both destructive and creative – a series of sand sculptures projected onto the domed ceiling reveal rings (like Martian crop circles), sharp linear forms and a happy face.

In fact, Maxime Pivin Lapointe, the show’s director and script writer, would later tell me that several faces can be found on Mars. A scientific film maker, Lapointe began working at the Mont-Mégantic Observatory while attending CEGEP. After beginning his career as a high school teacher, his love of astronomy soon fused with his vocation as a science educator leading to his work at the planetarium. On the topic of Mars, Lapointe explains, “It is the most accessible planet to us; we’ve been exploring it with probes for decades. We are now able to answer: what does Mars look like? Aside from the moon, it is the only other place we can do that.”

The Martian surface is essentially a frozen desert. Temperatures at the southern pole plummet further each winter when the area remains in complete darkness. At this time the carbon dioxide in the atmosphere freezes. When the first rays of sun reach the polar cap in the spring, the rise in temperature causes the frozen CO2 to melt. The result is explosive geysers spewing the carbon dioxide back into the atmosphere. 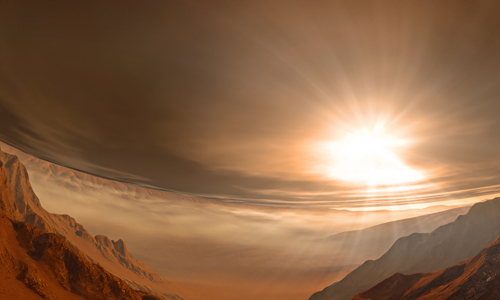 The Valles Marineris is 6 times deeper than the Grand Canyon.

Overshadowing everything on earth, Olympus Mons is the largest volcanic mountain in the solar system. The width of this extinct giant is about the size of Arizona and at its peak it reaches two and a half times higher than Mount Everest! For a size comparison a little bit closer to home – the Olympus Mons crater is about the size of greater Montreal. Continue your travels on Mars and you find a rift valley that makes the Grand Canyon seem modest, at best. The Valles Marineris is 6 times deeper than the Grand Canyon and stretches the width of the United States. These natural Martian landmarks are enormous, but the planet’s two potato shaped moons are puny compared to our lunar orb.

Mountain tops, polar geysers, potato shape moons, and sand sculptures of every sort, there is so much to discover in One Day… On Mars. 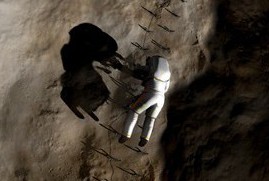 An astronaut working on the surface of an asteroid.

In the smaller Chaos theatre, equipped with bean bag and wooden Adirondack chairs, we are introduced to both the serious dangers and compelling opportunities that asteroids present.  Produced by National Geographic and Sky-Skan, and narrated by Sigourney Weaver, we learn how we may, one day, use asteroids as stepping stones in our quest to travel further into space.

Don’t forget to check out the informative exhibition area, where small fragments of Martian meteorites are on display. Each distinctive piece is accompanied by a description of their terrestrial landing location.

For information on show times and ticket prices, visit: www.montrealspaceforlife.ca